The world’s no. 1 digital coin, Bitcoin, continues to trade range bounce around 0.6850 heading into the weekly closing. Ethereum and Ripple also keep their recent trading range amid quiet Easter trading. Ripple, however, outperforms the top 3 most dominantly traded digital assets. The total market capitalization of the top 20 cryptocurrencies now stands at $198.85 billion, as cited by CoinMarketCap.

The top three coins could likely resume Friday’s corrective slide, with the FXStreet’s Confluence Detector tool suggesting key technical levels to watch out for in the week ahead. 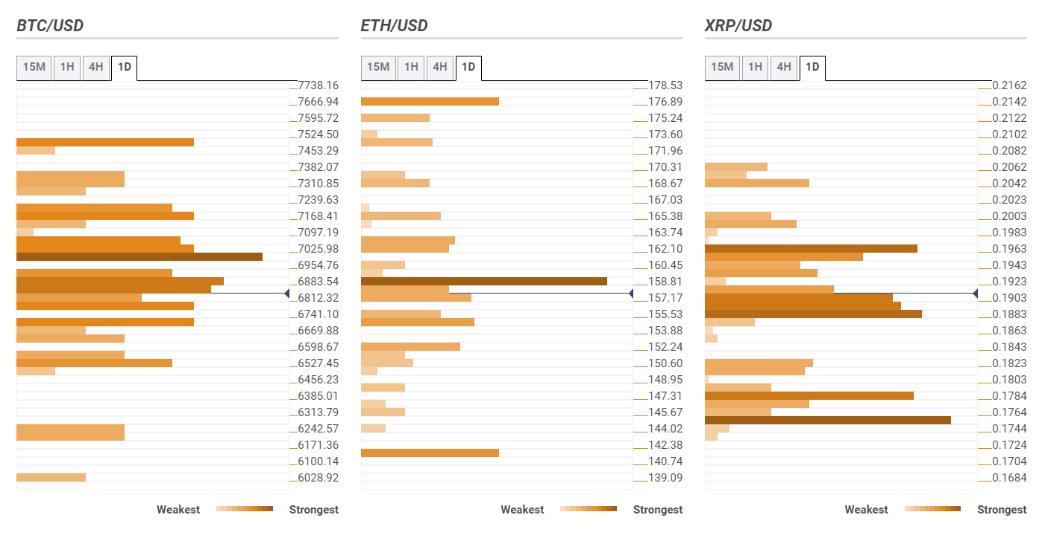 Amid a tug-of-war between the bulls and the bears so far this Easter, Bitcoin is likely to face the immediate resistance at 6883, the confluence of the upper Bollinger Band on 15-minutes chart, SMA 10 4H and previous high 1H. Further up, a minor next hurdle awaits around 6950, where the Fib 38.2% 1D and Bollinger Band 1H Upper coincide.

The buying interest will intensify above the latter, with the strong resistance at 7026 back in play. The barrier is the confluence of the Pivot Point 1D R1 and Fib 61.8% 1W.

Having said that, the downside appears more compelling amid a lack of substantial levels. The immediate support is aligned at 6741, the previous week low and Pivot point 1D S2.

Only a sustained move above that level would revive the recovery momentum from Friday’s sell-off.

Ripple is on track to conquer the symmetrical triangle pattern target near 0.1960, which also marks the key hurdle for the bulls. That level represents the Fib 61.8% 1M.

If the sellers regain complete control below the latter, a test of the strong support of the previous year low at 0.1754 will be inevitable.

See all the cryptocurrency technical levels.

Peter Schiff: In The Next Years Gold Will Rise More Than Bitcoin Because Bitcoin Price Will Crash

Peter Schiff, a well-known economist and renowned author, has taken another stab at Bitcoin. As he commonly compares the digital asset with gold, outlining its lack of intrinsic value, the expert now says that the precious metal will outperform Bitcoin as the latter will simply crash.

Bitcoin is commonly compared to gold in its property to serve as a store of value. In fact, the Chairman of the US Federal Reserve, Jerome Powell, referred to it as a “speculative store of value, just like gold.”

This doesn’t seem to be the opinion of Peter Schiff, though, as he’s been known for refuting Bitcoin’s value.

He reiterated his views today, once again saying that Bitcoin will ultimately “crash back to earth.”

Being asked to short Bitcoin as means of putting “his money where his mouth is,” Schiff explained that he’s already betting against the popular cryptocurrency.

“I own no Bitcoin and am long lots of gold and silver, and even larger positions in precious metals mining stocks. That’s effectively a big bet against Bitcoin becoming the new gold, or taking a safe have/store of value market share away from gold.” – He said.

Having many qualities relative to gold, Bitcoin is also commonly referred to as “digital gold.” Indeed, the cryptocurrency is “mined” in a sense that it takes work to produce more of it, hence the Proof-of-Work (PoW) consensus algorithm.

Furthermore, Bitcoin is also scarce – just as gold. Both assets have a predetermined amount. There’s only so much gold in the earth and so many bitcoins that will be minted. The difference is that we know how many bitcoins there will be (21 million), but not how much gold is left unmined.

Yet, an interesting point was brought up in Schiff’s Twitter thread, outlining that gold is archaic, and it used to work for non-digital societies, which ours is not. To that point, Schiff argued that “gold only became money about 700 BC. So it’s actually pretty modern. Plus, it’s a metal, not a rock. Bitcoin will never be money. Not even cavemen would be dumb enough to accept it.”

Gold bug Peter Schiff hopes to turn the tables on Bitcoin moonboys over the next several years.

The ardent crypto hater tweets that he expects the number one cryptocurrency by market capitalization to crash back to Earth.

During the COVID-19 pandemic, gold has so far fared much better compared to its digital version. On Apr. 9, the lustrous commodity pushed up to its seven-year high of nearly $1,750.

In the meantime, BTC is once again in the red this year, currently sitting at $6,835. The top cryptocurrency has been trading at knockdown prices ever since its 48 percent price plunge on ‘Black Thursday’ of March 12.

The fact that Schiff obsessively slanders Bitcoin on Twitter shouldn’t come as a surprise since it poses a threat to his offshore bank for high-net-worth individuals. In 2014, he mentioned that EuroPacific Bank in the Caribean was his fastest-growing business.

‘I don’t think it’s an accident that it’s the fastest growing and it’s the least regulated, even though it is highly regulated as a bank,’ Schiff said.

Gold and Bitcoin proponents have been at loggerheads for years, but there are many pundits who are certain that they are not in a zero-sum game. Case in point: former hedge fund manager Mike Novogratz who is long on both of these assets during the coronavirus crisis.

Are Bitcoin Miners Pumping BTC’s Hashrate to Profit from Halving?

There’s a notable increase in bitcoin’s mining hash rate, as miners now seek to acquire as many coins as possible before May’s block reward halving.

Not surprisingly, Bitcoin’s major price drop last month resulted in an equally notable drop in mining. Older, less-efficient rigs simply became too unprofitable to operate. Now that the price is moving back up, miners are putting these rigs back in action.

There is presently a substantial incentive to put older mining rigs to work. Temporary volatility notwithstanding, Bitcoin’s price is up about 40% since mid-March. However, the hash rate is only up by 12.5%. It is thus not surprising that miners are taking advantage of the opportunity for more profit.

This boost in hash rate has not gone unnoticed by analysts. It is a reflection of overall interest in Bitcoin investment and adoption. Analyst Plan B has tweeted:

#Bitcoin halving ETA: May 11
Miners are really pumping up hashrate
Next difficulty adjustment will be uphttps://t.co/zMdxlteR6Z pic.twitter.com/XeN5NcfwLP

Also, over the past few days, Bitcoin Cash and Bitcoin SV have both had block reward halvings. Not surprisingly, both platforms have seen their hash rates plummet. Because Bitcoin can be mined with the same ASIC-based rigs, former BCH and BSV miners are now switching networks. In fact, miners have long swapped between these and other cryptocurrencies that use the SHA-256 algorithm to find the platform that offers the best profitability.

It is possible that many of these miners will return to mining altcoins after the Bitcoin halving.

It is reasonable to assume that the hash rate will continue to accelerate as the halving approaches, as miners will want to load up on as many Bitcoins as possible before the block reward drops. No doubt many long-dormant rigs will be turned back on, even if presently unprofitable, as confidence in a major market recovery takes over.

In fact, excitement, around the halving continues to grow, as analysts offer a steady stream of opinions on how it will affect the market price. Searches for “Bitcoin Halving” on Google are steadily increasing, with a major boost expected over the next few weeks. Overall Bitcoin network activity continues to move up as well, leaving little doubt that investors are planning to buy now while the price is relatively low.

Mining activity is yet another metric indicating that the Bitcoin network remains strong, and is operating as designed. It will no doubt fluctuate over the next several weeks, yet will almost certainly increase in the long-term.

Do you think Bitcoin miners are artificially pumping the hash rate? Lets us know your thoughts in the comments below.

Previous
Bitcoin newsBitcoin (BTC) Price Is Likely to Plunge to $1K, Says Silk Road Founder. Here's When This Bear Market Could End
Next
Bitcoin newsIs 1 Bitcoin Enough for You to Retire On? This Analyst Thinks Yes Our robot colleague Satoshi Nakaboto writes about Bitcoin BTC every fucking day. Welcome to another edition of Bitcoin Today, where I, Satoshi Nakaboto, tell you what’s been going on with Bitcoin in the past 24 hours. As Habermass used to say: Shleppppppp it! We closed the day, August 11 2020, at a price of $11,410…. The primary bitcoin exchange-traded fund (ETF) in North America now holds over 11,000 bitcoins. Objective Bitcoin ETF noticed sturdy curiosity at launch. An ETF researcher defined that the surge in curiosity was proof of some mixture of pent-up demand, the value of bitcoin, and buyers switching from different technique of getting cryptocurrency publicity. The primary…