How can you be bearish Bitcoin here?

This week, Dave Portnoy, the founder of Barstool Sports and a celebrity day trader, bought Bitcoin with the help of the Winklevoss Twins. Analysts see this move as bullish for the cryptocurrency as his millions of followers will now be exposed to BTC on a regular basis.

Case in point: his Twitter video with the Winklevoss Twins has already been viewed over 700,000 times. Separate Portnoy interactions about Bitcoin have been liked and replied to tens of thousands of times as well.

I’m officially inviting the Winklevi twins to my office to explain bitcoin to me. Have to wear the rowing outfits though. #DDTG pic.twitter.com/owQr0aZVdn

This week, it was revealed that the Federal Reserve is looking into a digital/crypto dollar in collaboration with MIT.

Although it isn’t clear if this will materialize into an actual crypto asset, analysts say the digitization of finance will boost the value of Bitcoin.

As Arthur Hayes of BitMEX has explained, the abolishment of cash will lead to Bitcoin adoption due to the “moral and even psychological” need to keep information to oneself.

According to Charles Edwards, the market capitalization of Tether has increased 26% recently past $10 billion.

To analysts such as him, this indicates that there is an influx of interest in capital into the Bitcoin and Ethereum markets.

Edwards previously found that Tether’s market capitalization was strongly correlated to the price action of BTC throughout 2018 and 2019, with the correlation somewhat tapering off this year.

The last time this much of the BTC supply was inactive, the rally from the hundreds to $20,000 began.

Since Sunday, 1,043 more bitcoins were tokenized through Wrapped Bitcoin than were actually created by bitcoin miners as the Ethereum-based decentralized finance (DeFi) boom shows no signs of abating.

Bitcoin Breaking This Confluence Resistance Could Spark a Significant Surge

Bitcoin is trading in a bullish zone above the $11,650 level against the US Dollar. BTC is likely to accelerate higher once it clears the key $12,050 resistance zone.

In the past few days, there was a positive price action in bitcoin, Ethereum and ripple against the US Dollar. BTC remained well bid above the $11,200 level and the 100 simple moving average (4-hours).

It started a fresh increase from the $11,276 swing low and climbed above the main $11,500 resistance area. There was a break above a connecting bearish trend line with resistance near $11,600 on the 4-hours chart of the BTC/USD pair. 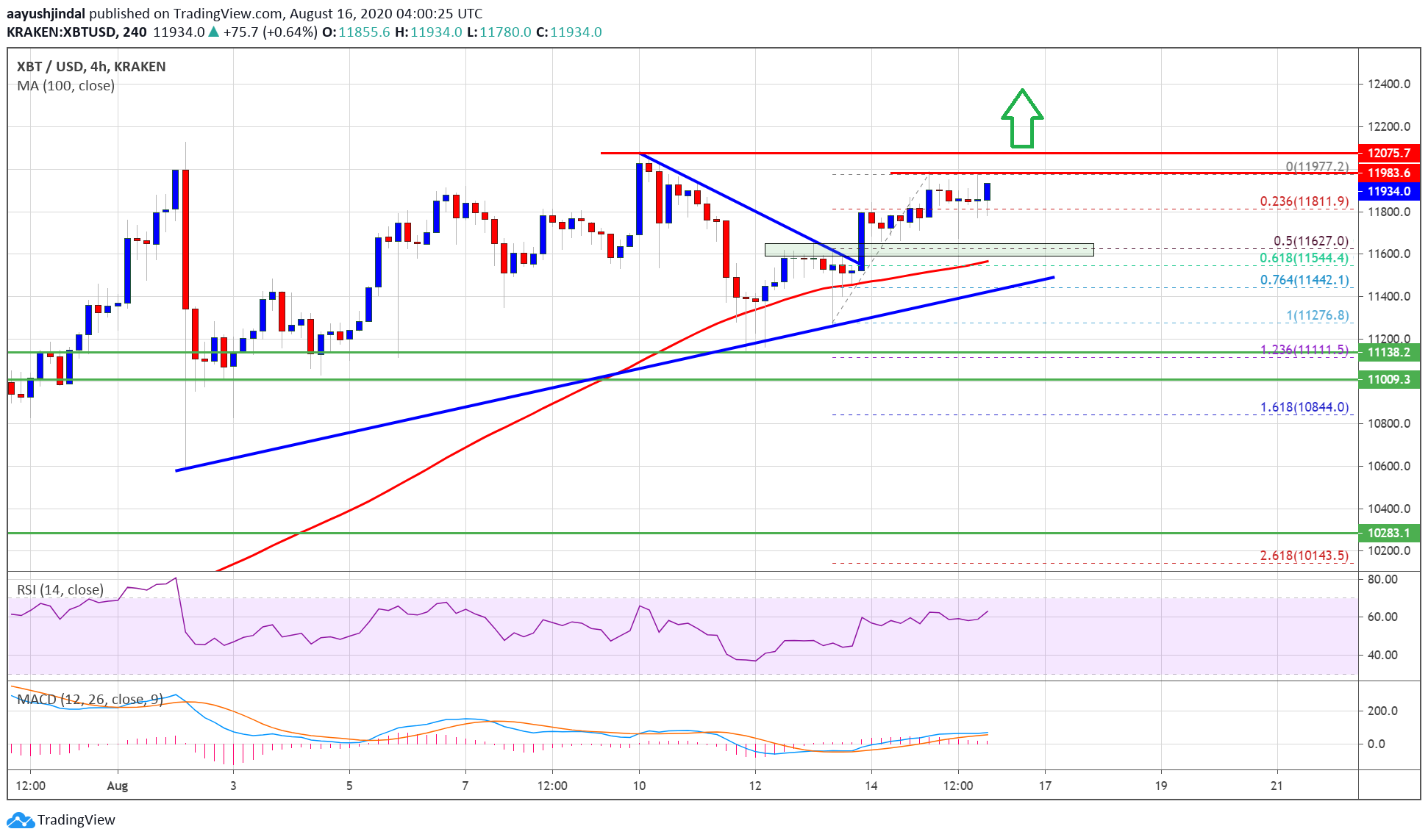 4 hours MACD – The MACD for BTC/USD is slowly gaining momentum in the bullish zone.

4 hours RSI (Relative Strength Index) – The RSI for BTC/USD is currently well above the 55 level. The Fear and Greed index has wallowed in extreme fear for more than a month. Historically, that’s been a good time to buy. Cumulative transaction fees paid to Ethereum (ETH) miners for 2020 are now close to double those of Bitcoin (BTC), clocking in at $276 million versus $146 million. A chart released by Coinmetrics highlights how Ethereum fees went on a steep ascent in the latter part of the year, coinciding quite closely with the release of… Bitcoin’s current fair value is around $27,000 according to one trend line, Stifel’s Barry Bannister says. But it could fall much further than that.