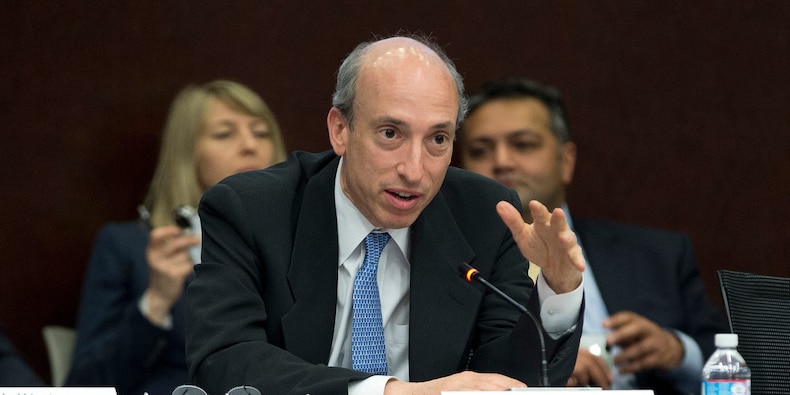 Gary Gensler took charge of the Securities and Exchange Commission in April.

Securities and Exchange Commission boss Gary Gensler has said cryptocurrency platforms have become so large that they need to embrace regulation or risk losing public trust, as he hones in on the booming crypto trading sector.

“At about $2 trillion of value worldwide, [the crypto market is] at the level and the nature that if it’s going to have any relevance five and 10 years from now, it’s going to be within a public policy framework,” Gensler told the Financial Times in an interview published Wednesday. “History just tells you, it doesn’t last long outside. Finance is about trust, ultimately.”

Gensler, who took charge of the markets regulator in April, told the FT he was focusing on cryptocurrency trading platforms because 95% or more of the activity in the “highly speculative” market takes place on them.

US lawmakers and regulators are increasingly concerned about cryptocurrencies – highly volatile digital assets that have become hugely popular with retail investors and even with some major institutions over the last year. The total value of all cryptocurrencies was more than $2.1 trillion on Wednesday, according to Coinmarketcap.

But there is some confusion about who should oversee the market. Regulators broadly think bitcoin – the biggest cryptocurrency – is more akin to a commodity than a security. Gensler has said many crypto tokens are securities, however, and has called for Congress to give the SEC more powers to govern the market.

Read more: A partner at Andreessen Horowitz reveals some of the secrets behind its big strategy to take crypto mainstream

Gensler told the FT he was disappointed with the industry’s reaction to his statement that crypto platforms should register with the SEC.

“Talk to us, come in,” he said. “There are a lot of platforms that are in operation today that would do better engaging and instead there is a bit of… begging for forgiveness, rather than asking for permission.”

Gensler said regulators would be able to oversee decentralized finance platforms, although a lack of central parties such as brokers would make it more difficult. He has previously said interest-bearing lending products should come under SEC oversight.

Cryptocurrency platforms are increasingly aware of the need to cooperate with regulators, especially in the wake of the crackdown on Binance by the UK and other governments.

He said regulators and exchanges need to work together to ensure new rules don’t add a lot of friction to crypto, “killing the use for it in the first place.” Bitcoin and Ethereum have led the market in the recent downturns that have rocked the market. These two digital assets are no doubt market movers … El Salvador officially adopted Bitcoin as legal tender this week, with the broader cryptocurrency market seeing a flash crash on Tuesday. Here is a rundown of other top stories US regulator probes Uniswap Labs The Securities and Exchange Commission’s (SEC’s) regulatory eye has now fallen on Uniswap Labs, developer of the largest decentralised finance (DeFi) […] On June 17th, Phemex co-founder and CEO Jack Tao participated in a live “ask me anything” session on Cointelegraph’s YouTube channel. The discussion explored trading the spot market versus trading the derivatives market — and much more.  The audience also asked about why crypto finance is different from traditional finance, what it takes for a…