Cochran says existing whales have increased their Ethereum positions by more than $550 million, or 4%, in the past six months, compared to the estimated total of $600 million in new capital influx Bitcoin had across all of last year.

And it’s not just existing whales who are accumulating, according to the DuckDuckGo executive.

“There are a significant number of new wallets in the top 10k who had their first transaction associated with fiat onramp exchanges that serve large scale customers (mostly Gemini, Kraken and Coinbase).

Combined, new and existing whales have bought more than $650 million in new Ethereum purchases across the past half year, more than the entire Bitcoin inflow total in all of 2019.

And the data indicates those big investors don’t seem interested in selling their ETH holdings, either.

“Right now, there is only 19.5M ETH listed on exchanges for sale. Even though 33.6M ETH is deposited in exchanges. That’s only 58% of deposits, so whales are accumulating, not selling.

Adam Cochran, partner at Metacartel Ventures released a Twitter thread outlining how his analysis of the top 10,000 Ethereum addresses & found a confluence of positive signs.

Unlike traditional assets, where each transaction is not recorded in a central database shared with the world, leading cryptocurrencies Bitcoin and Ethereum are almost entirely transparent.

While you may not know who is behind an address, firms and individuals all have access to every single transaction that takes place on these networks.

It is a nearly inescapable fact with public cryptocurrencies that many have used to their advantage, analyzing data to get an edge over other investors and users.

Adam Cochran, a partner at Metacartel Ventures and an adjunct professor at Conestoga College in Canada, recently made this much clear when he released a 109-part Twitter thread outlining how his analysis of the top 10,000 Ethereum addresses (by holding size) found a confluence of positive signs.

Here are some key points that he found from the data.

This is Cochran’s latest in-depth analysis of three Ethereum narratives. Previously, he examined how DAI could pose a true risk to the future of decentralized finance, and he analyzed how Ethereum 2.0 could create the “largest economic shift in society.”

Per previous reports from Blockonomi, he explained that the introduction of the blockchain upgrade is likely to cause a simultaneous supply shock and demand shock for Ether, pushing up prices at a rapid clip:

Ethereum 2.0 is the perfect combination of instant spikes, repetitive buying loops, competitive race conditions to drive up a short-term price, and just the right amount of background growth rate to catch that price before it falls, and offer a steady growing network thereafter.

Since 2013, Nick has shown interest in Bitcoin and cryptocurrencies. He has since become involved in the industry as a full-time content creator, working for NewsBTC, Bitcoinist, LongHash, among other outlets. Aside from covering the news, Nick is a Creative at Taiwanese technology company HTC. Contact NickC@blockonomi.com

The Bitcoin bulls are further extending to the north in the latter stages of the day, now holding chunky double-digits gains of some 12% at the time of writing. Momentum really picked up pace as the price shot through the $8400-500 price range. 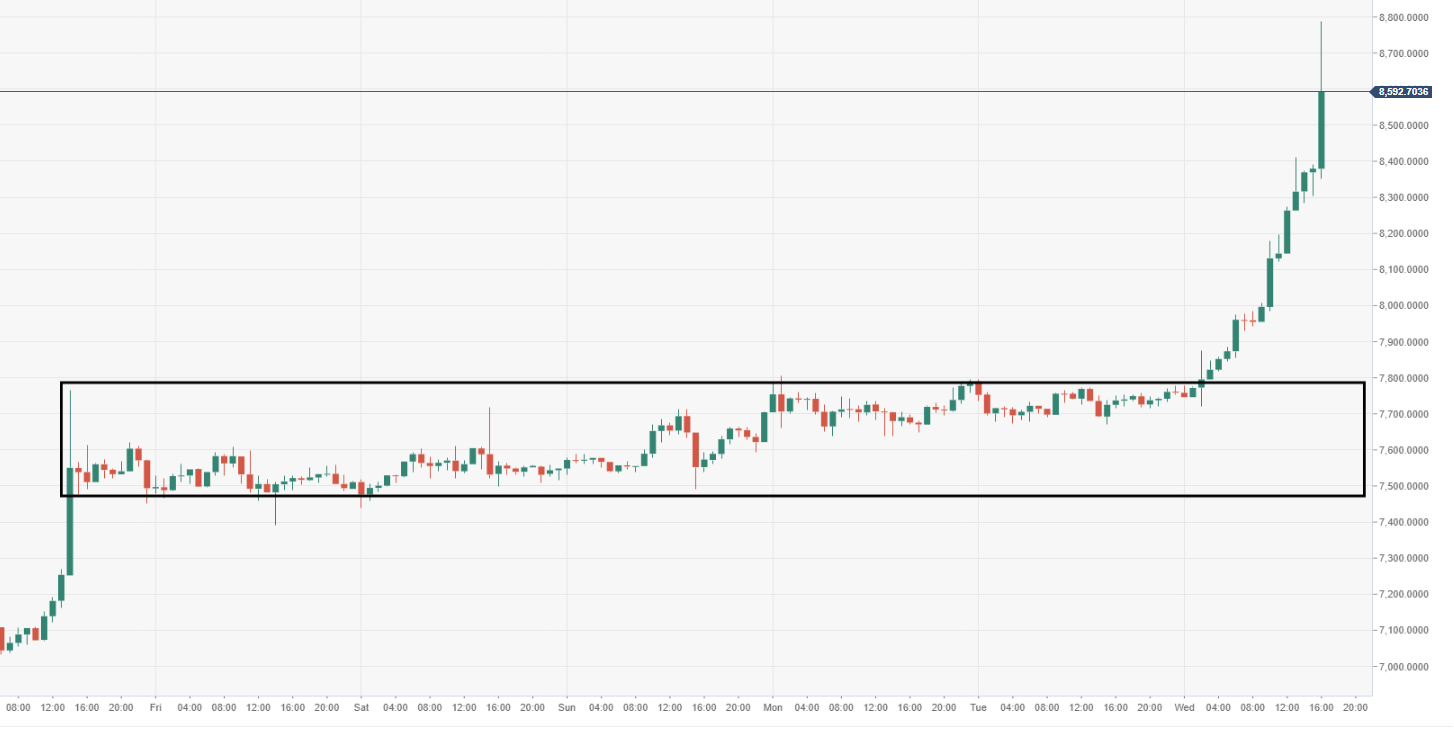 Following the move back above $200, there will be room for a fast return back up to $250, the next major upside barrier and then $280. It is also worth noting the bulls were able to break down a descending trend line, which had been in play since 15 February.

Litecoin price is trading in positive territory by 3.35 % in the session on Wednesday. LTC/USD can see another strong wave of buyers once April highs are broken. The next major barrier to the upside should be noted at $47.50, $50 and then $62.

How Are Bitcoin, Ethereum, Litecoin, BCH, BSV Hodlers Doing After the Rally?

The sentiment among investors in several major cryptoassets is on the rise, as a growing number of hodlers are seeing positive numbers on their account balance, on-chain analysis shows.

As defined by IntoTheBlock, holders that have a positive difference between the purchase price and current price are defined as being “in the money.” In cases where there is no difference, the holder is said to be “at the money,” while holders at a loss are “out of the money.”

For bitcoin specifically, a positive change of 4.07% in the number of wallets “in the money” shows that this asset is again producing profits for its holders, which contributes to the overall bullish rating that IntoTheBlock gives bitcoin.

Further, the underlying data shows that 75% of holders are currently (12:25 PM UTC) sitting on profits in fiat terms on their investment. Meanwhile, 19% are still “out of the money,” while 6% of holders are “at the money.” However, earlier today, when BTC was still above USD 9,000, 80% of the hodlers were profitable.

Out of the five biggest cryptoassets with on-chain data available, ethereum is the most bullish asset judging from the “In the Money” signal, with a positive change of 4.1% in the number of wallets with profits. Looking at the underlying data, we can see that 45% of holders in ethereum are currently profiting, while 49% are sitting on losses, and 6% are at break-even.

Ethereum also stands out as even more bullish than bitcoin from an on-chain analytics standpoint, largely due to a stronger “net network growth,” defined as the number of new addresses minus the addresses that go to zero.

Moving over to bitcoin cash, we get a different picture, with an overall bearish rating being assigned the asset by IntoTheBlock. Again, the contributing factor is largely the negative network growth revealed by the analysis.

However, the large majority of bitcoin cash holders that are currently seeing a positive account balance, with 85% of holders being “in the money,” and 13% being “out of the money.”

Bitcoin SV is largely reflecting the same situation as bitcoin cash, with a bearish overall rating, despite the fact that there is a growing number of holders that are sitting on profits. For this asset, however, IntoTheBlock’s data shows that there has been a large decline in the number of large transactions being made over the network, which has greatly contributed to the overall bearish outlook.

Based purely on the number of holders that are “in the money,” however, few assets can boast similar results as bitcoin SV, with a whopping 97% of holders currently in the green, the underlying data showed.

Lastly, litecoin is looking more like bitcoin from an on-chain analysis point of view, with an overall bullish rating thanks to strong growth in the number of holders that have profited from their investment. Interestingly, however, the “silver to bitcoin’s gold” differs in the way that a far lower share of the current holders actually have made money, with only 21% of holders being “in the money.” That leaves room for a large majority of 73% of investors, who are currently sitting on unrealized losses in their litecoin wallets, which is more than for any of the other assets we have analyzed.

BTC/USD dropped from the intraday $9,476 to $8,547. The first digital coin lost nearly $1000 in a matter of hours before recovering to $8,8820 by press time. Despite the sell-off, BTC is still 10% higher from this time on Wednesday. A sustainable move below $9,000 has created a strong bearish momentum; however, the coin is heavily bought on the dips.

Ripple’s XRP dropped from the intraday high $0.2357 to $0.2100. While the price has recovered to $0.2180 by press time, the XRP virtually erased all the gains of the previous day. From the technical point of view, XRP/USD retains the bullish bias as long as it stays above $0.2030-$0.2000. This former resistance area that includes 38.2%  Fibo retracement for the downside move from February 2020 high now serves as strong support.

Ethereum tested $227.36 during early Asian hours and retreated to $217.80 by the time of writing.  The second-largest digital asset has gained over 8% of gains on a day-to-day basis and 2% since the start of the day. Despite the downside correction, ETH/USD is still one o the best-performing assets in the recent seven days out of top-10. Ethereum’s market capitalization reached $24 billion, while its average daily trading volume is $28 billion. Ethereum had set a new ATH price at $1473 on Monday. It could not close a daily candle above the $1392 resistance and ended up rolling over the past few days. It continued to drop until support was found yesterday at $1200 (.236 Fib), which allowed the coin to rebound. It pushed higher today and… In today’s video, we’re joined by Carl from The Moon channel. For the first time, he gives us some Ethereum technical analysis. He will point out some very important Ethereum price targets and what we should be looking for when doing ETH analysis. At the end of this video, we’ll give you a reason to…