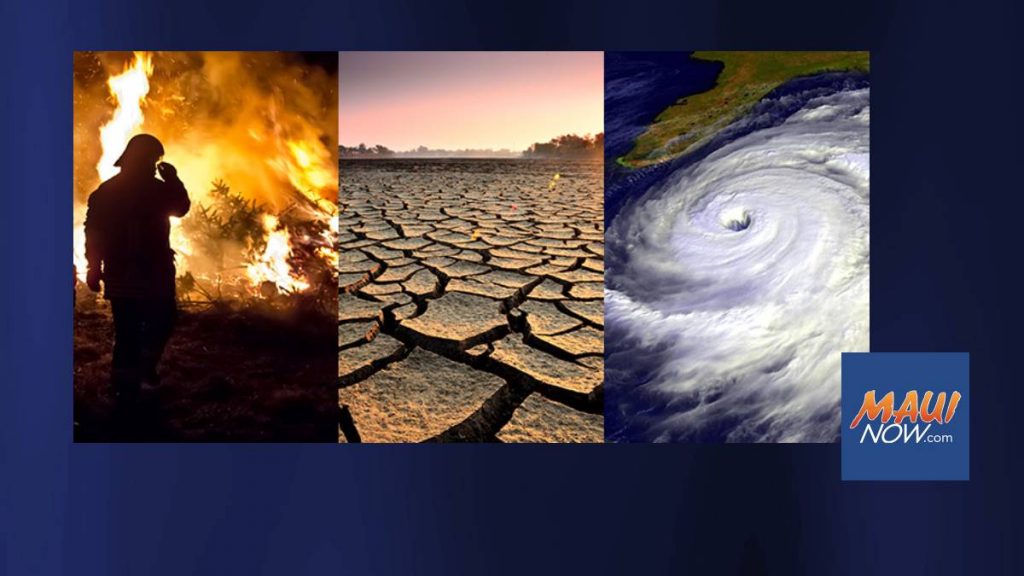 US Sen. Brian Schatz has introduced the Climate Change Financial Risk Act of 2021 that deals with potential future risk from more frequent wildfires, longer periods of drought in some regions and an increase in the number, duration and intensity of tropical storms. Photo Courtesy: NASA Climate Change

“Risk is risk,” Sen. Schatz said. “We should not be treating some risks different from others just because they’re hard to quantify. Our federal regulators are legally obligated to ensure a stable and efficient financial system, and that means reducing the risk of a climate-driven financial crisis.

“The Biden Administration recognizes that climate change poses systemic financial risks, but our regulatory agencies still lag their international peers in integrating climate into their supervisory work. This bill will push the Fed to start treating climate risks with the seriousness they warrant.”

Climate change is increasing the frequency and severity of extreme weather events like floods and wildfires. It is also changing long-term climate patterns in ways that will lower labor productivity; devalue and destroy assets; stress agricultural yields; and ultimately affect every sector of our economy. These impacts will pose risks for financial firms and the global financial system, according to a news release from Sen. Schatz.

Sen. Schatz and Rep. Casten originally introduced the bill in 2019.

“Climate change poses a grave and imminent threat to the stability of our financial system,” Rep. Casten said. “It is essential that our regulators establish parameters so that our financial institutions adequately prepare for and respond to these risks. Equipped with President Biden’s Executive Order to analyze and mitigate climate risks, our regulatory agencies must now take concrete steps.

“Our bill will move us forward toward safeguarding our financial system—from direct losses caused by droughts, wildfires and sea level rise to market volatility and erosion of investor confidence.”

Financial institutions face the risk of direct losses from severe weather events and fundamental changes like drought and sea level rise. These losses include lower property values from increased flooding. They also face risks from market instability, an erosion of investor confidence, and changes in carbon-intensive asset values resulting from government policies and consumer preferences. Unlike its counterparts in the United Kingdom, the Eurozone, and other jurisdictions, the Federal Reserve is not yet conducting climate scenario analysis as part of its supervisory regime.

The Climate Change Financial Risk Act would require the Fed to establish an advisory group of climate scientists and climate economists to help develop climate change scenarios for the financial stress tests.

With the input from the advisory group, the Fed will create three stress test scenarios: a 1.5 degree Celsius warming scenario; a 2 degree scenario; and a “business as usual” scenario, which assumes a higher level of warming if there are no climate policies in place.

For each scenario, the Fed will quantify the ways in which climate-related physical and transition risks could disrupt the economy and global business operations. The Fed will conduct stress tests every two years on the same large financial institutions that are currently subject to Comprehensive Capital Analysis and Review stress tests, including firms with more than $250 billion in total consolidated assets (and some with assets more than $100 billion, if the Fed deems it necessary to promote financial stability).

The biennial tests will require each covered institution to create and update a qualitative remediation plan, which will describe how the institution plans to evolve its capital planning, balance sheet and off-balance sheet exposures, and other business operations to respond to the most recent test results. Fed objections to a remediation plan would limit the institution’s ability to proceed with capital distributions until it improves its plan. However, institutions would not have to increase their current capital based on the results of a climate stress test.

Based on the same scenarios used for the stress tests, the Fed also will partner with the Office of the Comptroller of the Currency and the Federal Deposit Insurance Corporation to design a nonbinding exploratory survey, which will assess the ability of sub-systemic banks (those with more than $10 billion in assets) to withstand climate risks. The Fed will administer the survey every two years and report on the results in aggregate. Survey participants will remain anonymous in the report and will not face adverse consequences on the basis of their responses.

Companion legislation has been introduced in the House of Representatives by Rep. Casten and is cosponsored by Scott Peters (D-CA), Mike Levin (D-CA) and Mike Quigley (D-IL).

“The climate crisis is a systemic threat to our financial system and broader economy, but the time for merely acknowledging this risk has ended,” said Gregg Gelzinis, associate director for economic policy at the Center for American Progress. “The Climate Change Financial Risk Act would require the Federal Reserve to actually mitigate the risk and ensure the financial system is resilient to climate-related shocks.

“We need a financial system that can handle oncoming severe weather events and environmental changes, while serving as a source of strength to the economy during the clean energy transition. This bill is a major step in that direction.”

Fiona Reynolds, CEO of the UN-supported Principles for Responsible Investment, added: “Climate change poses a systemic risk to our global economy. The reintroduction of the Climate Change Financial Risk Act of 2021 sets out a series of sensible and necessary requirements to better account for climate-related physical and transition risks in the U.S. financial system, including three stress-test scenarios for large financial institutions.”

The Climate Change Financial Risk Act is supported by the Center for American Progress, the nonprofit Ceres, the UN-supported Principles for Responsible Investment, Public Citizen and Americans for Financial Reform.

A summary of the bill is available here.

Cryptocurrency ban to be made explicit; Govt to introduce Bill soon Sen. Ted Cruz (R-TX) claims Democrats “can’t admit” their gratitude over his Supreme Court victory that challenged federal limits on the amount of funds candidates can raise from donors to CAIRO (AP) — An Egyptian appeals court on Sunday said it lacks jurisdiction to look into the Suez Canal Authority’s demands to uphold financial claims that led to the the seizure of the massive Ever Given ship after it blocked the waterway in March. On Thursday, US Labour Department data had unveiled that the number of Americans filing for initial jobless claims dipped to the lowest since March 2020 pandemic-led shutdown