Prices: Bitcoin fell to a fresh two-year low as crypto traders speculated over the future of Genesis Global, a victim of the fallout from the recent collapse of Sam Bankman-Fried’s FTX exchange.

Catch the latest episodes of CoinDesk TV for insightful interviews with crypto industry leaders and analysis. And sign up for First Mover, our daily newsletter putting the latest moves in crypto markets in context.

Crypto markets are on edge as traders speculate over the fate of yet another victim of the fallout from the collapse of Sam Bankman-Fried’s FTX exchange.

Genesis Global, a once-mighty crypto trading and lending firm, was reportedly in talks to raise fresh capital, after it halted customer withdrawals last week. The case is being closely monitored by digital-asset traders partly because Genesis is owned by Digital Currency Group (DCG), which also owns Grayscale Investments, manager of the Grayscale Bitcoin Trust (GBTC), which is the largest publicly traded bitcoin fund. The speculation is that Genesis’s financial straits might put DCG in the position of needing to dispose of assets, which under various scenarios might affect GBTC and spill over into the bitcoin market. (CoinDesk is an independent subsidiary of DCG.)

“We expect the DCG/Genesis capital raise will be the big market moving event this week,” Nauman Sheikh, head of treasury management at Wave Financial. “A favorable outcome would lead to a market squeeze and an unfavorable outcome has the potential to do some serious damage.”

A Bloomberg report that Genesis had mentioned bankruptcy as a potential option briefly sent bitcoin (BTC) to a fresh two-year low of $15,480, but the price was back to about $15,900 as of press time.

“We have no plans to file bankruptcy imminently,” a Genesis spokesperson said. “Our goal is to resolve the current situation consensually without the need for any bankruptcy filing. Genesis continues to have constructive conversations with creditors.”

Mike Dershewitz, head of risk committee at Arca Funds, wrote Monday: “DCG can also sell off a portion of its Grayscale equity. Assuming $300M in annual net income, this cash flow stream should be worth at least $2.5B, depending on how a would-be investor/buyer values the longevity of this cash-flow stream.”

The collapse of the FTX exchange forced the Monetary Authority of Singapore last week to address what it characterized as “questions and misperceptions” about its prior regulatory treatment of Sam Bankman-Fried’s crypto-trading venue.

One narrative centers on whether FTX received favorable treatment from the island nation’s central bank. Singapore’s state investment fund, Temasek, had a $210 million investment in FTX that it has now written off entirely.

A key question is why Binance.sg – an affiliate of Binance, the world’s largest crypto exchange by trading volume – was placed on an Investor Alert List (IAL), while FTX was not.

Recently, the regulator released a 15-point statement addressing the issue. Central to the regulator’s argument is that Binance was actively soliciting Singapore residents, while FTX was not.

Except, this is not entirely the case.

MAS says one of the reasons is that Binance supported the Singapore dollar (SGD) in order to onboard Singapore-based users, and FTX didn’t.

FTX began support for the SGD as an asset class a few weeks before its demise according to a list of supported assets. Users would still have to wire in USD, unlike Binance.SG, which supported local payment gateways.

FTX-owned Liquid also supports the StraitsX XSGD stablecoin to, in the words of the exchange, “better serve our Singapore trading community.”

MAS also said that Binance solicited Singaporean users because of advertising campaigns directed at them.

And yet FTX did the same.

Token 2049, a major crypto conference that took place in the halcyon days of September 2022, counted FTX as one of its sponsors. The exchange’s logo-adorned swag was visible throughout the venue to anyone in attendance. 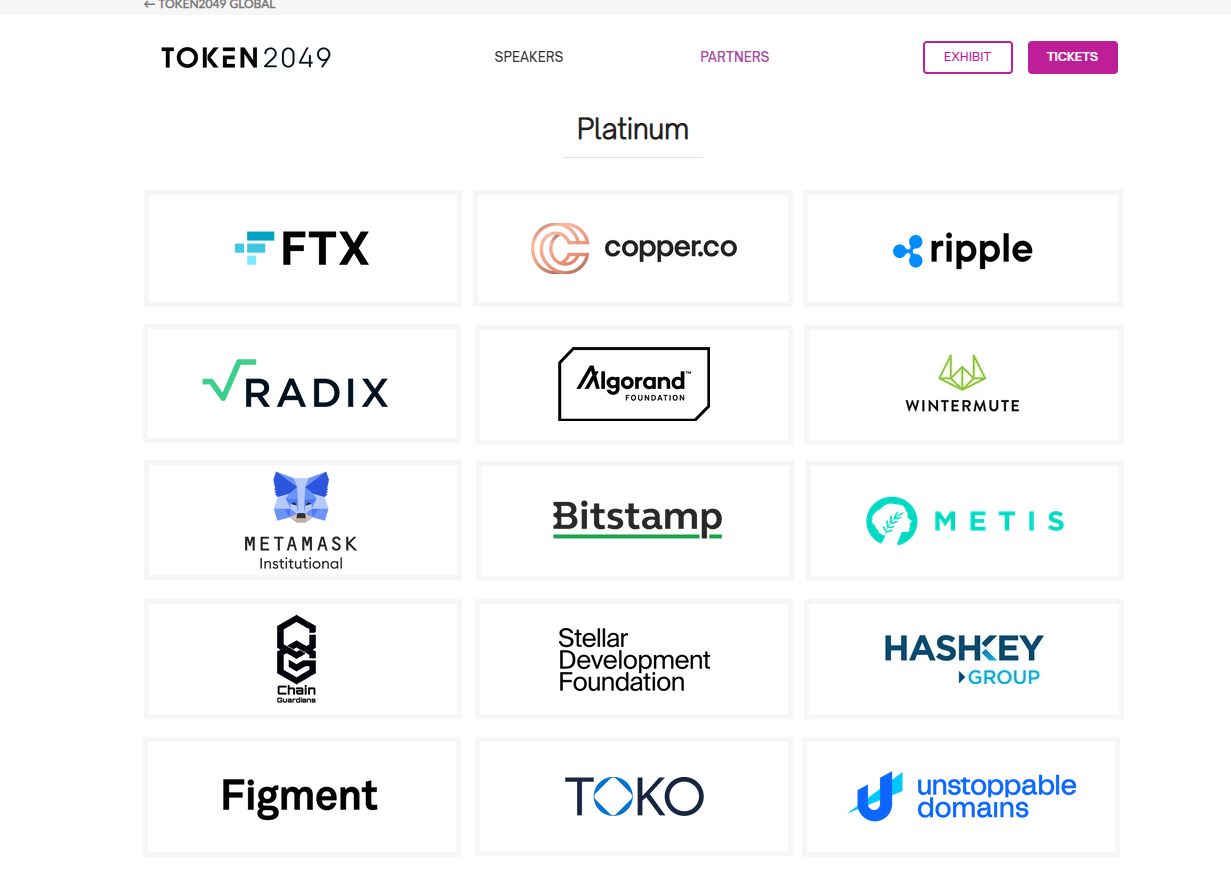 Days after the Token 2049 conference was the Singapore Formula 1 Grand Prix, which saw the FTX-sponsored Mercedes-AMG Petronas team compete — complete with the exchange’s logos available on the car and drivers’ hats for everyone to see.

It wasn’t too long ago that MAS put DeFiance Capital on the same list without giving much of a reason. While the inclusion on the list doesn’t necessarily mean there was legal impropriety, DeFiance Capital officials said they were flummoxed by the decision.

In case you missed it, here is the most recent episode of “First Mover” on CoinDesk TV:

Crypto Exchange Coinbase Shares Sink to All-Time Low: The most prominent U.S. crypto exchange went public in April 2021 in a high-profile listing, but shares have lost nearly 90% of their value over the past year, with the FTX contagion causing the latest leg down.

Kenya Proposes Bill to Tax Crypto: Roughly 8.5% of the African country’s population owns cryptocurrencies, according to a United Nations report.

More Than 50% of Bitcoin Addresses Are Now in Loss: Previous bear markets ended with the majority of addresses being out of the money, on-chain data shows.

FTX Japan Preparing to Allow Withdrawals by Year End, Report: The payment system for withdrawals is still suspended for now.

FTX Exploiter Transfers $200M in Ether to 12 Crypto Wallets: The exploiter had previously drained hundreds of millions of digital assets from FTX on the same day as the embattled crypto exchange filed for bankruptcy protection.

Catch the latest episodes of CoinDesk TV for insightful interviews with crypto industry leaders and analysis. And sign up for First Mover, our daily newsletter putting the latest moves in crypto markets in context.

First Mover Asia: Bitcoin Climbs Back Past $19.5K Amid Fresh Hopes for a Fed Retreat; Binance’s Failed Plan to Boost the Price of Luna Classic

BTC/USD bulls and bears maintained a back-and-forth throughout Friday to take control of the market. The fear and greed index shows that the BTC/USD market is currently experiencing “extreme fear.” BTC/USD dropped from $7,510.78 to $7,477.75 as the bears took control after four consecutive bullish days. The price has encountered resistance at the upper curve… There could be sharp price moves over the next few days.