Ever since its inception, bitcoin has been dubbed “digital gold,” given it is durable, fungible, divisible and scarce like the precious metal.

However, while gold has a strong track record of rallying in times of stress in the global equity markets, bitcoin is yet to build a similar reputation as a safe-haven asset.

In fact, in recent months, the cryptocurrency has been increasingly correlated with the S&P 500, Wall Street’s equity index and benchmark for global stock markets. Now, data suggests that relationship is stronger than ever, likely denting its appeal as digital gold.

The one-month bitcoin-S&P 500 realized correlation rose to a record high of 66.2% on June 30 and stood at 65.8% on Thursday, according to crypto derivatives research firm Skew, which began tracking the data in April 2018.

“While bitcoin and S&P 500 correlation is always a very good indicator of market movement, it never really maintains a consistent position. Bitcoin behaves more like a highly leveraged position and follows the market trends in a more volatile, dramatic up and down swings,” said Wayne Chen, CEO and director of Interlapse Technologies, a fintech firm.

The one-month metric oscillated largely in the range of -30% to 50% for 12 months before rising to record highs above 60% on June 30. The data indeed shows that bitcoin’s correlation with the S&P 500 is somewhat inconsistent.

The one-year correlation has also risen to lifetime highs above 37%, according to Skew. One should note, though, that readings between 30% to 50% imply a relatively weak correlation between variables.

“Bitcoin, by all accounts, is still a risk asset. Despite those who may tout its fundamental similarities to gold, it has not yet proven to be a sufficient hedge or a flight to safety in times of risk-off sentiment,” said Matthew Dibb, co-founder of Stack, a provider of cryptocurrency trackers and index funds.

Risk assets are the those with fortunes tied to the state of the global economy. For instance, prices of stocks and industrial metals like copper tend to rise when the global economic growth rate is expected to pick up pace and falter during an economic slowdown.

Bitcoin has more or less behaved like a risk asset this year. The cryptocurrency’s price fell from $10,000 to $3,867 in the first half of March, as global equities cratered on coronavirus fears. It then rose back toward $10,000 in the following two months as the S&P 500 saw its fastest bear market recovery on record.

However, being treated as a risk asset may be a blessing in disguise for bitcoin.

“Given that the correlation between BTC and equities is still so high, our expectation is that this is only bullish for bitcoin price in the short term, as global markets benefit from an unprecedented amount of monetary stimulus,” said Dibb.

Indeed, the U.S. Federal Reserve (Fed) and other major central banks are injecting massive amounts of fiat liquidity into their respective economies to counter the COVID-19 slowdown. As of last week, Fed’s balance sheet size was $7.01 trillion – up 67% from $4.24 trillion in early March, according to data provided by the St. Louis Federal Reserve.

While bitcoin is struggling to establish itself as a haven asset, some investors remain undeterred.

“HODLers” or long-term holders of bitcoin, as gauged by the number of addresses storing bitcoin for at least 12 months, rose to a lifetime high of 20.3 million in June. That surpassed the previous high of 19.52 million reached in May, as per IntoTheBlock, a blockchain intelligence company.

“With the halving just recently complete, many holders believe that Bitcoin’s median price should be a lot higher than the current value. This creates more of a hodl type of behaviour until the market starts building steam again,” said Chen.

The metric set a new record high for the 12th straight month in June. Notably, the number of holders is up 22% year-on-year, even though bitcoin’s price is down 25% over the same period.

At press time, the cryptocurrency is trading at $9,110, having dipped to lows near $8,930 during the U.S. trading hours on Thursday.

Disclosure: The author holds no cryptocurrency assets at the time of writing.

Gold ‘Harder to Confiscate’ Than Bitcoin as Searches Spike

Bitcoin (BTC) loses to gold when it comes to how easy it is to transport and confiscate, says Peter Schiff.

In a tweet on July 29, the gold bug and infamous Bitcoin skeptic claimed that it was easier to move and preserve ownership of the precious metal.

“Gold is absolutely transportable and harder to confiscate than Bitcoin,” Schiff wrote.

In addition to being physically bulky and therefore harder to transport, gold has long been extremely difficult to store privately. As Saifedean Ammous noted in his popular book, “The Bitcoin Standard,” government gold confiscation in the early 20th century effectively put an end to individual sovereignty based on physical gold reserves.

Schiff did not back his assertions about gold immediately, but is already well known for his support of gold as a superior asset to any cryptocurrency.

As XAU/USD is seeing record highs of $1,958 against the U.S. dollar, Schiff was in a celebratory mood, having little time for arguments in Bitcoin’s favor during a debate with Morgan Creek Digital co-founder, Anthony Pompliano, this weekend.

Responding to his tweet, however, Robert Breedlove, CEO of Parallax Digital, was not so forgiving.

“Literally every US dollar in existence is the echo of confiscated gold,” he retaliated, referring to 20th-century government policy.

Gold’s USD successes have nonetheless served it well when it comes to mainstream attention. According to data from Google Trends, search interest in “How to buy gold” spiked as all-time highs came into view.

Bitcoin has also increased its publicity profile, but gold has seen a divergence over the past week.

As Cointelegraph reported, BTC/USD hitting yearly highs of $11,400 has surprised analysts, but has yet to translate into a retest of historical highs of $20,000. 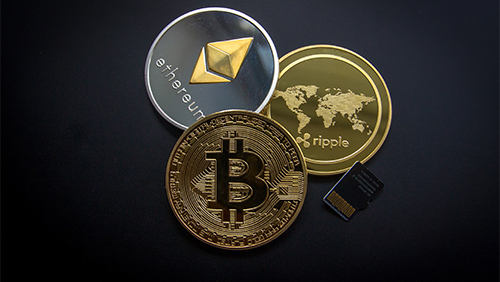 Bitboss has been hard at work to deliver a great gambling experience on Bitcoin SV (BSV) to the world, and customers can now get it in their hands. Dragon BSV Casino has launched on Android devices, giving gamblers a whole new way of experiencing BSV gaming at home or on the go.

The gambling games developer took to Twitter on July 28 to make their big announcement:

At launch, Dragon BSV has two of the more popular casino games in the world to play: Roulette and Baccarat. It teases that Blackjack is the next game to come. Judging from their website, Sic Bo might be the next game down the line, as its pictured in promotional materials, and a peek at Bitboss’ site indicates we might be able to expect lottery games and sports betting down the line. “We are always expanding this library so you can add, remove, or trade out games anytime to make your own personal casino more enjoyable,” their website notes.

Android users will notice that installing the app is fairly easy. It’s simply a matter of installing the .APK file and, once the app is ready to launch, creating or restoring a BSV wallet. Impressively, the wallet doesn’t let you finish the process until you’ve proven you can back it up, if the worst should happen. That’s an improvement on most digital currency wallets we’ve seen.

Those of us with iPhone will have to wait a bit to try it out. They promise it is “Coming soon to Apple iOS.”

As Bitboss has promised in the past, this BSV experience is user friendly and keeps most of the digital currency in the background. While you play, all funds are displayed in a fiat currency of choice, with the app doing the conversion math in the background for you.

And the focus appears to very much be on providing the user a fun, trustworthy experience. Their website notes:

And provably fair gameplay is a big part of that. If the ball lands on red a little more than you think it should, or the Dealer seems to be unbeatable, you’ll always have access to test the random seed for yourself. They explain how BSV makes this possible:

“Blockchain encryption allows us to generate the secret outcome of the next round, and gives you access to it before you bet. That guarantees the game cannot possibly change the outcome to disadvantage you based on your bets. After each round, you receive the key to unlock the secret and prove the game was unbiased and legitimate every time. So you can safely enjoy gambling for actual cash, knowing that the casino always plays fair, and you can prove it.”

For other games developers and operators looking to get into the action, another visit to BitBoss’ website details some of the code they used to create this app, and how it was accomplished entirely on the BSV blockchain, thanks to its ability to massively scale, transmit data and keep costs low. They may be able to help you accomplish your goals too.

Due to current regulations in the gambling space, the app isn’t yet available everywhere. Players from the U.S., France, Hong Kong and other countries will receive a message that they are geoblocked if they try to play any of the games right now.

But for those who can try it, it’s definitely worth a peak. BitBoss is bringing some of our favorite games to the Bitcoin SV blockchain, and BSV gambling to the world. A resurgent bitcoin is rekindling Indian interest in cryptocurrencies with reports suggesting many dormant holders are back to trading. A report in Livemint is also attributing the piqued interest to a recent Indian supreme court decision to overturn a prohibition that barred banks from dealing with cryptocurrency exchanges. The ban was imposed by the Reserve… One year ago, a single token of Bitcoin (CRYPTO:BTC) was valued at roughly $5,800. Today, it’s trading at approximately $57,600 per coin — up a staggering 877.5% across the stretch.  With the cryptocurrency putting up incredible gains and potentially powering a lasting economic shift, three Motley Fool contributors weigh in on Bitcoin’s outlook. Read on… After Tesla announced it has invested US$1.5 billion in bitcoin BTC and expects to start accepting the cryptocurrency as a payment for its electric vehicles in the near future, the bitcoin price went soaring. It went from around US$39,400 to an all-time high of over US$48,000 in less than 24 hours. The price is now… Justin Sun, the founder of Tron, a smart contract-enabled cryptocurrency platform, announced yesterday he would fly to space next year to fulfill one of his childhood dreams. The space trip will be done in a Blue Origin spaceship, the company owned by Jeff Bezos, founder of Amazon, which also made an inaugural flight last July….