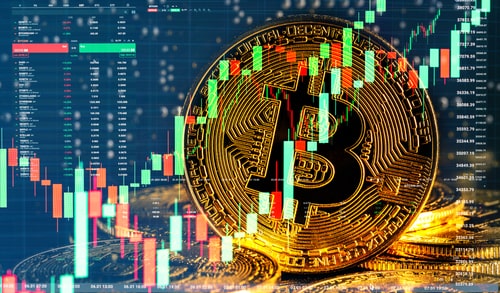 (Kitco News) Despite markets gearing up for an aggressive Federal Reserve in the first half of this year, the U.S. central bank will likely have to pause once the U.S. economy slows. This is when Bitcoin will go “to the moon,” said Galaxy Digital founder Mike Novogratz.

The comments were made during Bitcoin 2022 conference taking place in Miami.

Novogratz is expecting a 50-basis-point rate hike from the Fed soon as Chair Jerome Powell remains “very hawkish for a while” during his fight against four-decade high inflation. According to the CME FedWatch Tool, market participants see a 76.6% chance of a half-a-point hike at the May meeting.

Many, including Goldman Sachs, are also projecting another 50-basis-point hike at the June meeting.

“We now forecast 50bp hikes at both the May and June meetings, followed by 25bp hikes at the four remaining meetings in the back half of 2022 and three quarterly hikes in 2023Q1-Q3,” Goldman economists said in March.

This is quite an aggressive stance, especially with Powell indicating that the U.S. economy could handle tighter monetary policy. However, the big fear markets have is how much the U.S. economy will suffer as the Fed raises rates.

Deutsche Bank warned this week that the U.S. will experience a “major hit” in 2023 and 2024 as the Federal Reserve slows growth prospects with its aggressive tightening plan.

“The U.S. economy is expected to take a major hit from the extra Fed tightening by late next year and early 2024,” the economists said. “We see two negative quarters of growth and a more than 1.5% pt rise in the U.S. unemployment rate, developments that clearly qualify as a recession, albeit a moderate one.”

And once the Fed is forced to pause due to slower economic growth, “Bitcoin goes to the moon,” Novogratz said during his fireside chat on Wednesday. “We’ll have an industrial recession maybe, but the jury is out on how quickly it slows,” he added.

Bitcoin’s eventual long-term price target is $500k and $1 million, according to Novogratz.

“I go to bed, and I pray that the stewards of the U.S. economy don’t screw it up,” he said. “And so I really do pray that the dollar is going to be strong and it doesn’t go to infinity because Bitcoin going to infinity means the rest of the Western world has really fallen apart.”

During the first quarter of the year, Bitcoin has been mirroring the performance of U.S. stocks as investors react to changing risk-on/risk-off sentiment due to increased geopolitical uncertainty following Russia’s invasion of Ukraine.

However, Novogratz added that Bitcoin could be sending some decoupling signals. He explained that Bitcoin’s purpose is to preserve wealth. “Traditionally, when countries had horrible stewardship and started having hyperinflation, people would find U.S. dollars and put them into their pillowcases. We are moving to a digital world. You are going to see stablecoins and Bitcoin as part of that,” he said.

As 25,000 attendees flocked to Miami for the annual Bitcoin event, the world’s largest cryptocurrency was down nearly 4% on the day and last trading at $43,984.

Crypto billionaire Mike Novogratz says bitcoin holding at $40,000 shows the market is in good shape – and recommends buying the dip A panel of experts at the United Nations says that North Korea has amassed $316 million in cryptocurrencies from various cyberattacks on crypto exchanges and financial institutions. The panel also investigated North Korea’s involvement in the $281 million hack of a crypto exchange. A United Nations panel of experts has submitted a draft report reviewing… U.S. Representative Patrick McHenry is pro-bitcoin. He is now hosting the Bitcoin whitepaper on his official congressional website and has called on other lawmakers to embrace innovation like Bitcoin. He believes that the cryptocurrency is unstoppable and governments cannot kill it. A growing number of U.S. lawmakers have recently spoken in support of Bitcoin. Among…