Bitcoin price is trading in negative territory, down 0.50% in the second half of the session. BTC/USD bulls are running at seven straight days in the green, as the move higher continues. The next major barrier is viewable at the psychological $8000 mark. 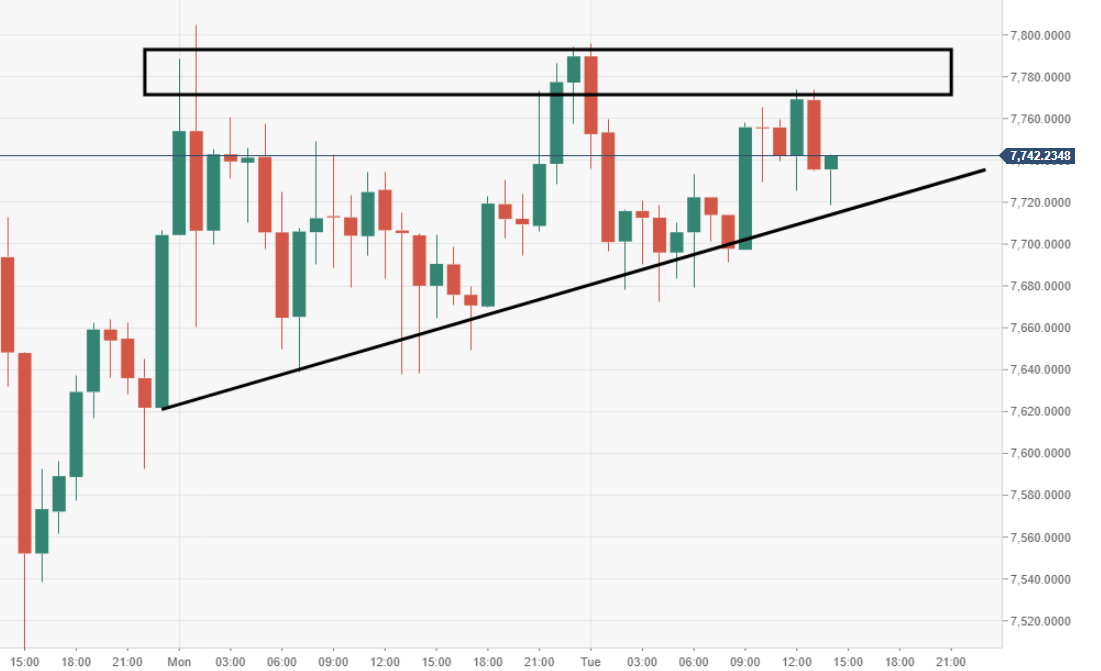 Ethereum price is trading in the red by 0.35% in the session on Tuesday. ETH/USD is consolidating just underneath the big $200 price mark. Should the bulls push above the noted level, it will likely restore buyer confidence. 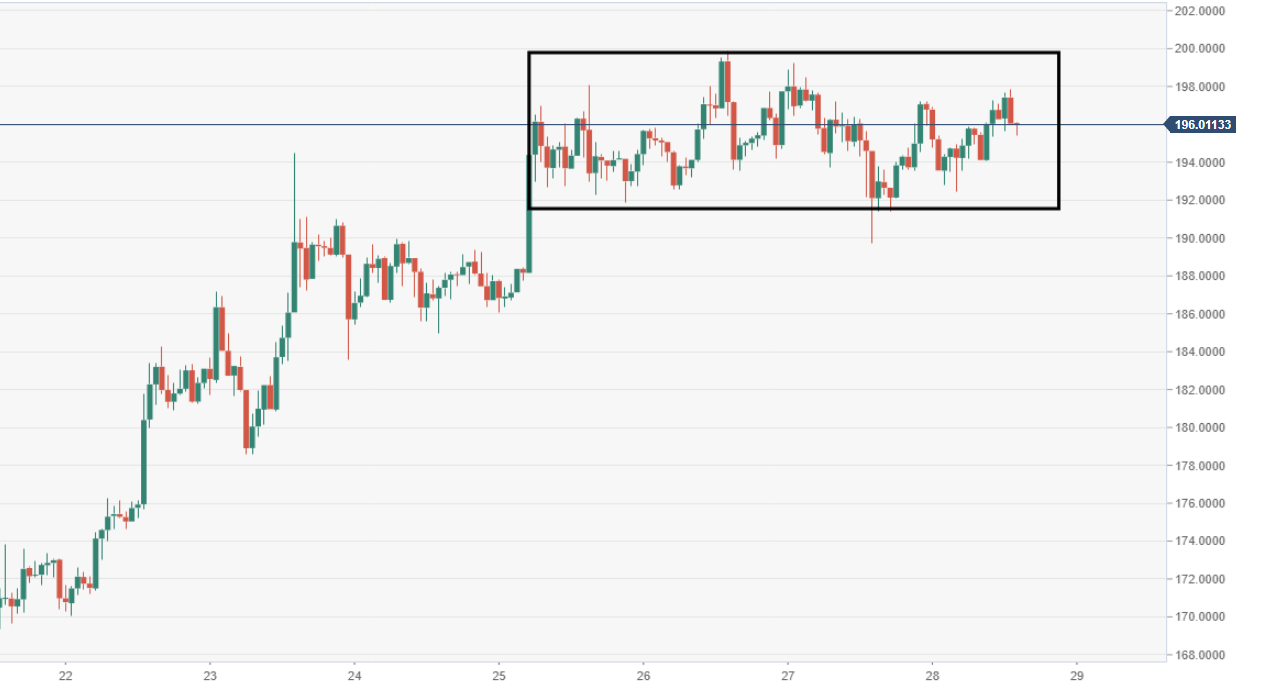 Litecoin price is trading in negative territory by 0.45 % in the session on Tuesday. LTC/USD is a small step away from an explosive move north, barrier at $45. A return back into the $50 territory could quickly be seen and restoring buyer faith. A district court in China has reportedly ruled that Ethereum’s cryptocurrency is legal property with economic value. This ruling follows a couple of other verdicts on the legality of cryptocurrency, including bitcoin, by various Chinese courts. While cryptocurrency is not legal tender in China, people can hold and transfer them like property.

The Shenzhen Futian District People’s Court in Guangdong Province, China, has ruled that ether is legal property, protected by Chinese law, local media reported last week. This means that the Chinese are not barred from owning or transferring the cryptocurrency, local publication 8btc explained, adding that according to the court ruling:

The crypto assets represented by ETH have economic value and can be traded publicly.

The theft case involved a blockchain engineer, known by the name Li, who worked at a company called Shenzhen Xinyijia Technology Co. Ltd. in March last year. The following month, he participated in a project called “Haode Star,” a joint venture between his company and Shenzhen Haode Trade Co. Ltd., the plaintiff of the case. Li was in possession of the project’s private key and payment password.

He left his employer on May 31 last year after his probationary period ended. Unhappy with the termination, Li used the Haode Star project’s private key and payment password on June 20, 2019, to log into Haode Trade’s account at the cryptocurrency exchange platform Imtoken. He allegedly stole 3 ETH and 4 million Haode coins. The court also found that on July 15, 2019, Li stole an additional 0.4 ETH from the same account using the same credentials, the news outlet detailed. He proceeded to transfer the plaintiff’s cryptocurrency to his own accounts at Okex and Imtoken.

According to the transaction records provided by Haode Trade, the value of the supposedly stolen ETH was more than 6,000 Chinese yuan ($846). Li has returned all of the Haode coins and the 0.4 ETH he took. In addition to paying the plaintiff 5,536.99 yuan, he was sentenced to seven months in prison and ordered to pay a fine of 2,000 yuan.

This is not the first time a Chinese court has ruled that cryptocurrency is property. In 2018, the Shenzhen Court of International Arbitration ruled in favor of protecting an “equity transfer agreement” involving bitcoin, bitcoin cash, and bitcoin diamond. In the same year, the Shanghai Hongkou District Court found that ETH was property protected by Chinese law in the general legal sense. While China does not recognize the monetary properties of cryptocurrencies, including bitcoin and ether, the court said at the time that “we cannot deny the fact that ether should be protected by law as a general property.”

What do you think about the Chinese court’s ruling on ethereum? Let us know in the comments section below.

Ethereum is approaching the psychological level of resistance at $200 after rallying by 10.16% over the past five days.

Breaking out above $200 would indicate a period of continuation to the upside, with $212 emerging as a potential target as it was a level of support in February.

A break out would also mean that Ethereum has completely recovered from the gruelling sell off on March 13, with it surging by 115% since it crashed to as low as $90.

The recent recovery can be attributed to a number of fundamental and technical factors, the first of which being the relative recovery of global stock markets as economic fears surrounding coronavirus begin to subside.

Another reason that specifically focuses on cryptocurrencies is the upcoming Bitcoin halving, which will see rewards for miners slashed from 12.5BTC per block to 6.25BTC per block.

While the halving is thought to have more of an impact on Bitcoin itself, it has historically caused a notable rise in the price of altcoins like Ethereum.

However, for the past 18 months it has been consolidating below the $350 level of resistance, printing consecutive lower highs in the process.

In order for Ethereum to take the bull by the horns in a macro sense it needs to break above key levels of resistance at $290, $350 and $487. Best Gaming DealsThe best deals on games, consoles, and gaming accessories from around the web, updated daily. God of War (PlayStation Hits) | $14 | Amazon This console generation is winding down (although we still can’t pre-order the new ones… what’s up with that?), so now is the time to pick up some of the… Source: thecryptoreport.com ContentsHacker Receives Jail Time For Crypto TheftEthereum Transaction Fees Are Going Parabolic as DeFi Continues AscentEthereum DEX Trading Reached Half A Billion In A Day Hacker Receives Jail Time For Crypto Theft A woman in Australia will go to jail for the theft of more than 100,000 Ripple digital currency tokens over two… Rocket LP DAO is a 4-month old loan provider which is the cryptocurrency news today for using non-fungible tokens (NFTs) as collateral. As we can see this week, this firm issued the first loan of $1,000 backed by only one Ethereum domain name – brantly.eth. The loan was issued for 90 days with a 15%… https://www.newsbtc.com/wp-content/uploads/2020/12/ethereum-active-addresses-altcoin-season-Depositphotos_328170434_xl-2015-460×306.jpg Early signs that Bitcoin’s bull market was brewing was tipped off by a slow and steady increase in BTC address activity, and now that trend is taking place across ETH wallets. Wallet activity has now reached a level not seen since this summer’s DeFi surge. But what exactly does this mean for the second-place… The economic landscape in 2020 is completely global. Goods are produced and shipped all over the world at record speeds, requiring an intricate network of coordination and communication between manufacturers, suppliers, shippers, logistics companies, and retailers. While the internet-of-things (IoT) was an important step in connecting these channels, blockchains and cryptocurrencies are set to be…