Bitcoin has made a lower high on the 4-hour chart after rejecting the 55 EMA on the daily timeframe. Zooming in on the 4-hour now the lower high that was created and it stopped exactly on the 61.8% Fibonacci retracement. Now tracking the projections lower, the extension of 161.8% confluences with the 61.8% of the larger wave in blue. This makes the zone very strong and the probability of the target being tested is now higher.

Ethereum price is trading in the red by 3.35% in the session on Monday.

ETH/USD is back under pressure by the bears, with the critical $150 at risk of a breach.

The next major area of interest to the upside for the bulls will be eyed at $200.

Litecoin price is trading in negative territory by 0.30 % in the session on Monday.

LTC/USD has lost upside momentum over the last five sessions.

The bulls failed to break down the supply in a run into the $50 mark, inviting more downside pressure. 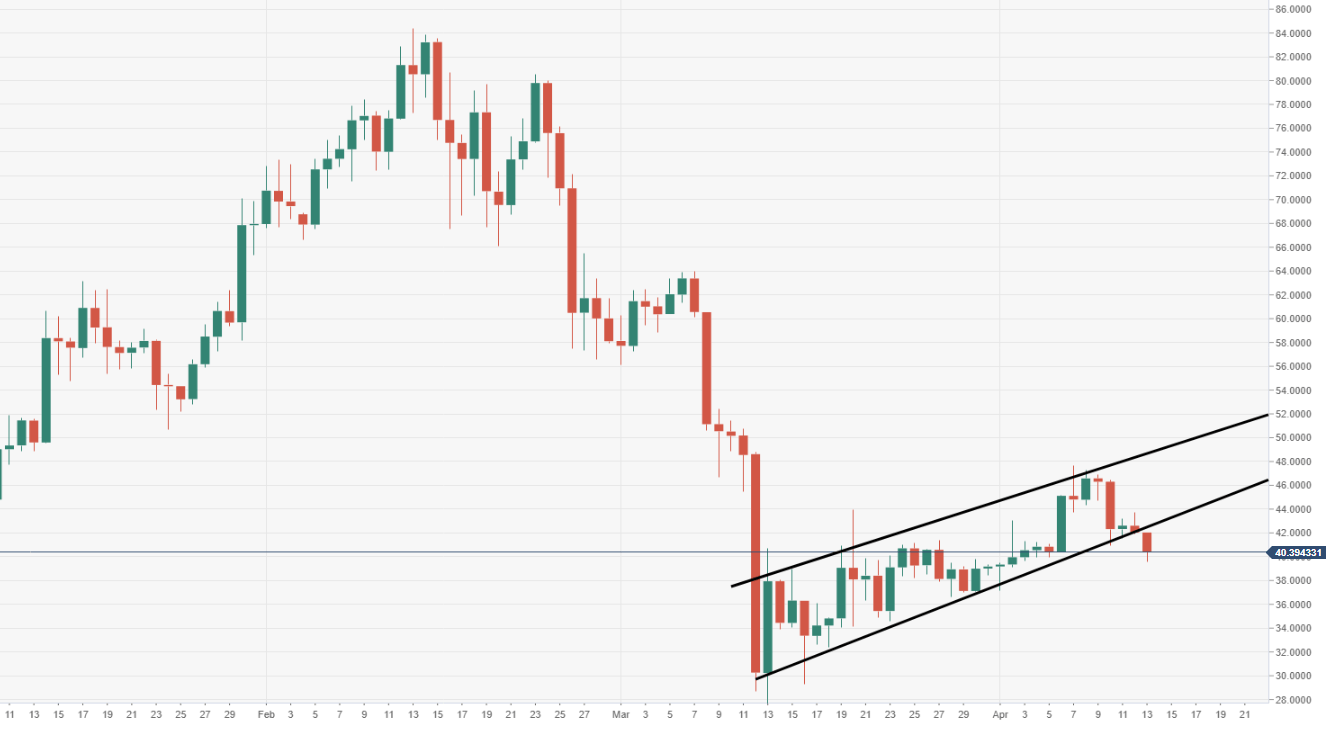 What is your assessment of XRP / EUR?

Revealed by a Reddit user “MagoCrypto”, the so-called “community points” will feature a new subreddit system, giving extra benefits to the users of the platform.

According to the post on the “Cryptocurrency” subreddit, the new rewards system is based on Ethereum blockchain.

My favorite proposal for a simple meaningful ethereum integration @reddit could do was one of @virgilgr‘s ideas: they should allow subreddits to set an arbitrary smart contract address as their moderator

If Time is Money, Why Don’t Funds Move Fast Enough for Traders?Go to article >>

Confirming the prospect, a Reddit spokesperson said: “We continuously experiment with ways to support communities on Reddit. In this instance, we’re working with one community to test a feature that represents a user’s involvement in a community. We value and seek out community feedback as we continue to explore features that engage our users and communities.”

The spokesperson, however, did not say anything about the usage of Ethereum.

Reddit is one of the favorite platforms for crypto users with many subreddits for discussion on specific topics.

Now, the platform’s pilot for a new rewards system is not an abrupt decision as it was mulling for the same for a while.

“Points are a measure of reputation and contribution within a community. To highlight the most important members of a community, points balances will be displayed next to usernames on posts and comments in the subreddit,” the FAQ section in the Reddit post detailed.

Reddit already awards Karma to its users for engagement on the platform, but that only shows the reputation of the user on the platform, nothing else. With the new rewards system, Redditors will have points with real value.

“Users can spend Points to buy Special Memberships in their community. A special membership unlocks exclusive features in the community,” the post detailed. “The points are destroyed (“burned”), making everyone else’s shares of Points go up. This ensures that buying memberships rewards the community as a whole.” Ethereum spent most of 2020 outperforming Bitcoin by a large margin, thanks to the burning hot DeFi trend and the related tokens’ reliance on the second-ranked crypto asset. Bitcoin has been surging for the last few weeks while altcoins have struggled to come anywhere near close to the top crypto asset’s bullish momentum. A surge… The Swiss canton of Zug now allows its residents to pay taxes in cryptocurrencies like Bitcoin (BTC) and Ether (ETH). Bitcoin Suisse, a local crypto broker that enabled the new opportunity in partnership with the canton, announced Feb. 17 that the crypto payment option has rolled out this week. The administration of the canton of… Initial Exchange Offerings (IEOs) have largely replaced Initial Coin Offerings (ICOs) as a way to launch a new token or blockchain project. The world’s largest crypto exchange, Binance, announced its latest and greatest update earlier this week, which is a new crypto token called CTSI, or Cartesi. The latest Launchpad offering will promote a token… Get your daily, bite-sized digest of cryptoasset and blockchain-related news – investigating the stories flying under the radar of today’s crypto news. CI Global Asset Management said it has filed and obtained a receipt for a preliminary prospectus for CI Galaxy Ethereum ETF (exchange-traded fund) to be traded on the Toronto Stock Exchange. “When launched,…