The price extended the decline and tested the $45K support against the US dollar but the price is now recovering the losses while the $52K zone could act as a strong resistance. BTC dropped heavily below $50K and tested the $45K support zone. However, the price is now recovering well but bitcoin could struggle at $52K again with the key bearish trend line forming at the $51,200 resistance on the hourly charts of the pair. The previous support near $51,800 could act as a stronger barrier.

The coin is now testing the $50K resistance but it is still well below the 100 hourly simple moving average. There’s also a key bearish trend line that is forming with the resistance of $51,200 on the hourly charts of the pair with the first one forming near $51,800. The 50% fib retracement level from the downward move at $58,400 high to the $44,960 low is near the $51,800 so a new close above these resistances is a level that has to be hit for a fresh increase towards $55K.

If BTC Fails to continue higher above the trend line resistance of $51,800, there are even more chances of a dip. The initial support on the downside is closer to $48,000 level. The main support is now forming near the $45K zone so if there’s a clear break below these supports, the price could drop by 10% in the near-term with the next major support standing at $40K. The hourly MACD for the pair is gaining momentum in the bullish zone while the hourly RSI is above the 50 levels.

Digital asset markets are seeing some turbulence on Tuesday as the entire crypto market capitalization has lost 11% in value during the last 24 hours. Bitcoin has slid to a low of $44,846 during the morning trading sessions (EST) losing more than 18% during the last day.

Cryptocurrency proponents are watching markets closely after the price of bitcoin (BTC) started sliding early Sunday morning after coasting along at the $55k range. 12 hours prior the crypto asset had reached an all-time high at $58,354 per unit. Since then BTC touched a low of $44,846 on Tuesday and has been very volatile during the last 24 hours.

Today, BTC’s market valuation is under the $1 trillion mark it once held at $909 billion at the time of publication. There’s a whopping $47 billion in global BTC trades among the overall $177 billion in swaps across the entire crypto economy.

The second-largest market cap is still held by ethereum (ETH) but ether is down 8% at the time of writing. Currently, ETH is swapping for $1,576 per coin and has a market valuation of around $180 billion.

Tether has regained the third-position in the top ten rankings, while binance coin (BNB) now holds the fourth spot. BNB is down 14% and trading for $227 per token. The fifth position is held by polkadot (DOT) which is down over 5% and swapping for $34 per unit.

Meanwhile, as crypto assets took a dive during the last 24 hours, stocks have slid as well while the Federal Reserve Chair Jerome Powell testified to Congress. Powell didn’t seem phased by the dreadful U.S. economic outlook and rising bond yields.

The Fed Chair noted that inflation was “soft” and the central bank would be there with continued fiscal policy. The cryptocurrency analyst Ben Lilly explained in a recent blog post that this is bullish. “If the Fed does scale up their purchase of Treasuries, then this can be bullish for bitcoin,” Lilly stressed.

Simon Peters, the crypto-asset analyst at the multi-asset investment platform Etoro also says the sell-off is part of a global downfall. Today’s correction for crypto assets is part of a wider sell-off in markets globally,” Peters wrote in a note to investors.

“Being driven by profit-taking,” Peters continued. “Investors are closing positions, which will have generated significant gains for many of them. However, as positions are being closed and prices fall, Etoro data shows even more new investors are coming on stream for the first time and buying bitcoin, with 26% more opened positions than closed ones in the last seven days (to Monday).”

The sell-off will attract more investors long-term. However, in the short-term some we will see some volatility, as we are today. We still see great potential for bitcoin and peers as we move through the year.

Meanwhile, after the fall under the $45k handle, BTC has managed to jump back above $48k for the time being. So far, people are curious as to where the crypto asset will be headed next after a crazy run-up to the $58k+ territory last week.

The business intelligence firm said it now owns close to 90,531 bitcoins and will continue to buy more.

Major bitcoin corporate backer MicroStrategy Inc said on Wednesday that it bought another 19,452 bitcoin, worth around $1.03bn, swelling its holdings of the cryptocurrency and sending the company’s shares eight percent higher in premarket trading.

The company, whose Chief Executive Officer Michael Saylor is one of the most vocal proponents of bitcoin, bought the cryptocurrency in cash at an average price of about $52,765 each.

The company earlier this month engaged in an almost $1bn convertible note offering with the proceeds used for buying bitcoin.

Square Inc Chief Executive Jack Dorsey promised on Tuesday to “double down” on the payment firm’s commitment to bitcoin, the world’s biggest cryptocurrency.

The company’s bitcoin holdings are valued at about $4.48bn, according to a Reuters news agency calculation.

“We will continue to pursue our strategy of acquiring bitcoin with excess cash,” MicroStrategy’s Saylor said.

Microstrategy has purchased an additional $1.026 billion worth of bitcoin, raising the total number of bitcoins it has accumulated to about 90,531. Its CEO explained that his company remains focused on its two corporate strategies of growing its enterprise analytics software business and “acquiring and holding bitcoin.”

Microstrategy Inc. announced Wednesday that “it had purchased an additional approximately 19,452 bitcoins for approximately $1.026 billion in cash at an average price of approximately $52,765 per bitcoin, inclusive of fees and expenses.” The announcement continues:

The company used the proceeds from its $1.05 billion convertible note offering which it completed last week to purchase the additional bitcoins.

The pro-bitcoin CEO Michael Saylor explained that his company “remains focused on our two corporate strategies of growing our enterprise analytics software business and acquiring and holding bitcoin.”

The amount of bitcoin the company holds reaffirms its “belief that bitcoin, as the world’s most widely-adopted cryptocurrency, can serve as a dependable store of value,” Microstrategy explained.

What do you think about all the bitcoins Microstrategy has been buying? Let us know in the comments section below.

The digital token rose as much as 7 percent on Wednesday, climbing to near $50,000 after sinking 13 percent on Tuesday.

Bitcoin rebounded from its sharp selloff of the past few days as additional purchases by MicroStrategy Inc. and Square Inc. helped to ease concern investors were starting to exit the famously volatile cryptocurrency.

Square said it had purchased $170 million in Bitcoin, raising its holdings to about 5% of the company’s cash and equivalents. MicroStrategy said it paid an average $52,765 for nearly 20,000 tokens last week after issuing $1.05 billion in convertible bonds. 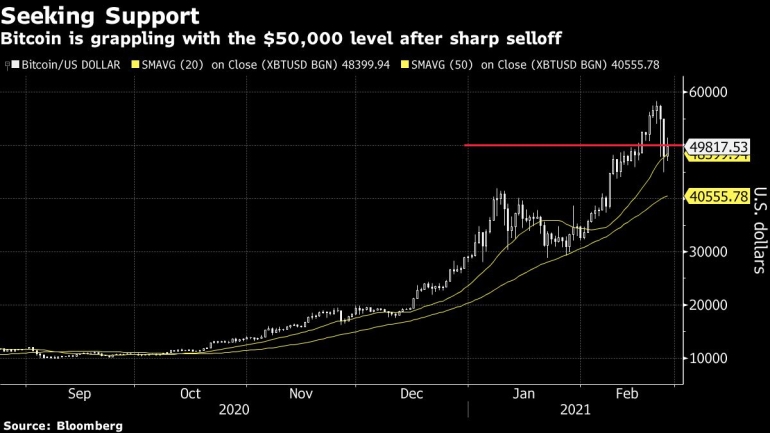 Overall investor sentiment has also been boosted by comments Tuesday from Federal Reserve Chair Jerome Powell, who signaled the central bank is nowhere close to unwinding its easy policy. Cryptocurrencies have been buoyed by a tide of monetary and fiscal stimulus to fight the impact of the pandemic.

“The rebound was helped along by a concurrent recovery in stocks as the Fed chair reassured the market of the central bank’s ongoing commitment to pursue ultra-accommodative monetary policy,” said Joel Kruger, cryptocurrency strategist at LMAX Digital.

The cryptocurrency rally is at the center of one of the hottest debates in financial markets. Believers see an emerging asset class being embraced by long-term investors, not just speculators. Critics fear Bitcoin is in a bubble that will inevitably burst. What the two sides seem to agree on is that the world’s largest digital asset’s famed volatility is likely to continue.

Globally, regulators are keeping a close watch. The Bank of Portugal on Wednesday reiterated previous advisories to consumers about virtual assets like Bitcoin due to their recent volatility. That follows a warning from Sweden’s financial watchdog about selling exchange-traded crypto-tracking products to average consumers. Meanwhile, the Biden Administration also signaled concerns with Treasury Secretary Janet Yellen calling Bitcoin an “extremely inefficient way of conducting transactions” earlier this week.

Bitcoin and Ethereum Show Signs of Recovery Despite Recent Correction

A Bullish Pattern Is Formed Despite Bitcoin’s Recent $ 3,000 Correction-$ 16200 Is Important Support Level

Ethereum Posts Massive Losses as Likelihood of a Recovery Decreases Crypto market has been in the doldrums this past week, as the Bitcoin price lost more than 10% of its value during this time, dragging many altcoins with it