The price chart for cryptocurrency ethereum displays bullish patterns despite the recent correction.

Going back to 2019, ethereum price has (for the most part) been contained within parallel price channels.

Looking at the chart below, we can see price following the downward sloping price channel from June 2019 to July 2020 (orange highlights).  When prices did finally rally in March 2020, ETHUSD clearly paused at the resistance trend line of the channel as Ethereum price was paying its respect to the formation.

However, ethereum prices eventually popped up outside of this channel and began to carve its own new channel (blue highlights). 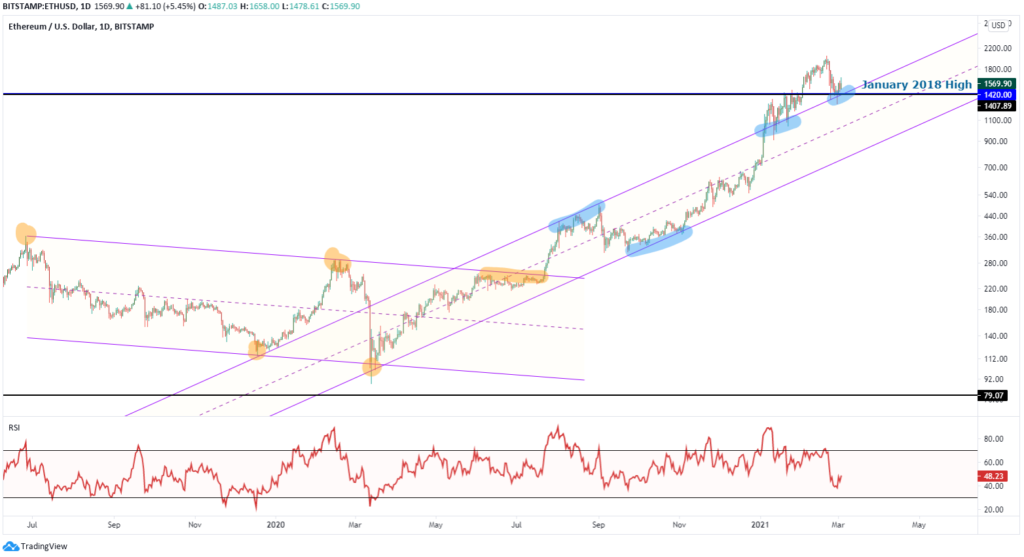 Sure enough, beginning in 2021, this old resistance channel line is behaving like a new support line for ETHUSD pricing.

On February 28, ETHUSD prices hit a low of $1293, then bounced hard to the upside.  There was a strong technical reason for the bounce.  First, ETHUSD price was guarded by the resistance channel trend line as we mentioned a moment ago.

Secondly, previous all-time high in ETHUSD prior to January was $1420.  When ethereum prices broke higher into new all-time high territory, this broken resistance at $1420 would act like new support.  Sure enough, when prices dove lower on February 23 and February 28, both days experienced a strong rebound as this new support level is helping to hold prices up.

Receive clear analysis and education on chart reading.  Get access now by joining the Trading Price newsletter for no charge.

We don’t know for sure if ETHUSD prices will continue higher.  However, the price low of $1293 from February 28 is an important level.

So long as ETHUSD holds above $1293, it is possible to see this cryptocurrency work higher into new all-time highs.

In fact, if we look at the king of crypto, Bitcoin’s price retracement simply dropped it to support too.

If ETHUSD prices fall below $1293, then you would have prices breaking down below the channel support line AND breaking below previous support near $1420.

A breakdown below $1293, though not expected, would be a huge red flag and call into question if the uptrend is still in force.

Bottom line, look for new all-time highs while holding above $1293.

Interested in learning more about how to read charts of Ethereum, bitcoin and other markets?  Become a TradingPedia Insider by joining the Trading Price Newsletter and receive clear analysis and education twice per week.

Bitcoin (BTC) and Ether (ETH) appear to be experiencing something of a slowdown, as on-chain data shows a dramatic decrease in the U.S dollar value of coins being sent across both blockchains in the past week. At the same time, transaction fees for both chains have receded from recent highs, or in Ethereum’s case, an all-time high.

Data from Bitinfocharts shows $46.68 billion worth of BTC was sent across the Bitcoin blockchain on Feb. 25. For some context, that’s around 5% of the total Bitcoin market cap, which stands at $925 billion at time of writing.

Over on Ethereum, the slowdown was equally pronounced. In the four days between Feb. 23–27, the total value of coins sent across the Ethereum blockchain fell 65%  from $11.1 billion to $3.84 billion.

The average fee statistic can often be misleading, as it is heavily weighted by the mass of large transactions that incur super-high fees. The typical Ethereum user may be more interested in the median transaction fee value, which also fell 72% down to $5.23. For context, the recommended fee for making a “rapid” Ethereum transaction is currently around $2.80 according to GasNow.org.

Such a sizable slowdown in activity on both blockchains could be interpreted by some as a sign that the current bull run is grinding to a halt. Yet a glance at the recent history of both chains shows that such pullbacks are not uncommon.

In January, the dollar value of Bitcoin transactions fell 72% over a two-week period, before picking back up again to soar even higher in February. Likewise, the average Bitcoin transaction fee dropped 58% in the same time period. The same general pattern was observed on Ethereum.

With this in mind, it is in all likelihood too early to assume that the current slowdown is indicative of the end of the crypto bull run, at least based on these metrics alone. Indeed, in the seven days since these metrics bottomed out, they have since begun to rise once more, as the ebb and flow of the cryptocurrency market continues.

Ethereum Fundamentals Signal $2,000 ETH Price Is Closer Than It Seems “Having received such data, you can find out how much a certain account received a loan and at what interest rate. This architecture is bad for the interoperability of assets also. If for some reason a smart contract is not popular, the investment funds participating in it lose their reputation.” I battle to grasp your… Popular social media platform Reddit is in the news today after it announced a partnership with the Ethereum Foundation, with the development establishing Reddit’s first-ever blockchain partnership. The goal behind the same is to accelerate the scaling process and resources for the Ethereum ecosystem and bring the value of blockchain technology to Reddit’s community of over 50… The whole crypto space is on fire these days ahead of the halving. Bitcoin is scheduled to witness its third halving on May 12, and at the moment of writing this article, the most important coin is trading in the green. Currently, BTC is priced at $9,275.95 on CMC. The online publication the Daily Hodl… Analysts say that the unknown hacker behind the KuCoin breach is selling the stolen ERC-20 tokens on Uniswap. Although selling tokens on the Ethereum-based decentralized exchange allows the hacker to obtain Ether (ETH), it doesn’t mean it’s laundered. All transactions made on the Ethereum blockchain network are traceable using blockchain explorers, meaning even if the…