With the stablecoin market remaining at record-high levels for well over a month, more analysts are taking it as a sign that crypto traders have not given up on higher prices, but are simply waiting for an opportunity to enter bitcoin and other digital assets once again.

As reported, many crypto investors sought refuge in popular stablecoins like tether (USDT) and the Coinbase-backed USD coin (USDC) as the crypto market saw one of its largest sell-offs ever on March 12 and 13. However, the market capitalization of the major stablecoins have not decreased even as volatility in the crypto market has returned to normal levels. On the contrary, stablecoin market capitalizations have continued their rise, causing some to speculate that all of this capital is eagerly waiting to enter bitcoin (BTC) or altcoins again.

“We’ve got more dry powder held in the crypto economy than ever before,” Selkis concluded.

The same trend was also pointed out by the blockchain analytics firm Glassnode, saying that yet another all-time high in tether balances held on exchanges was recorded on Friday, up from the previous all-time high just the day before. It thus appears as if people’s appetite for stablecoins is still not being satisfied, with the market continuing to grow by the day.

Also, the market capitalization of all stablecoins combined has continued to increase despite almost no change in total trading volume in the crypto market. According to CoinGecko’s latest quarterly report, this divergence may be yet another indicator that “traders have decided to sit out of the markets while holding stablecoins to weather out the storm.”

The big question, obviously, is when exactly investor’s appetite for stablecoins will be replaced by a growing appetite for riskier cryptoassets.

As previously reported, some of the biggest players in the crypto space claim that they do believe that time will eventually come, and have taken advantage of the lower prices to add more coins to their portfolios. To name a few, they include macro investor and Real Vision founder Raoul Pal, who has previously said “I can not express how bullish I am on bitcoin,” Galaxy Digital founder Mike Novogratz, who revealed that he is short stocks and long bitcoin, and Pantera Capital’s Dan Morehead, who believes the crypto market is about to “explode higher.”

The recent recovery in Bitcoin price has bulls breathing a sigh of relief, hoping that the worst part of the coronavirus market panic is now behind us. But an ominous fractal has appeared on Bitcoin price charts, potentially warning of a repeat of the record-breaking drop last month.

The economy started off 2020 stronger than ever. Major stock indexes reached all-time highs, and Bitcoin price had reclaimed $10,000 and all signs pointed to a new bull run as the asset’s halving approached.

But a black swan event arrived with the coronavirus pandemic, causing a massive shock to the economy and highlighting just how broken the current monetary system is, and how vulnerable humanity is to something like a virus.

Production has been crippled due to the lockdown, and nearly every industry has been hurt by the outbreak. Jobless claims have skyrocketed into the tens of millions. The resulting panic fearing a recession, caused nearly every asset to experience a massive selloff, including Bitcoin.

Stocks, gold, oil, and others also tanked, but cryptocurrencies fell by between 50-70% in most cases, due to how volatile the speculative assets are. Bitcoin price fell to below $4,000.

And while the first-ever cryptocurrency has made as strong recovery, nearly doubling in value from the extreme low, an ominous chart pattern and fractal has appeared on Bitcoin price charts, hinting at a repeat of the catastrophic collapse.

Panic hit the cryptocurrency market in a big way, with a historic selloff that beat even the impact the pandemic had on the stock market, which saw the worst decline since 1987 – long before crypto ever existed.

Before the drop, Bitcoin price formed a pattern that appeared similar to a head and shoulders, with an extra right shoulder at the end. The same pattern has since appeared on charts once again, and it could be foreboding another dangerous drop.

In the chart below, the previous price pattern has been overlayed on top of the current price action, showing just how similar the movements have been. 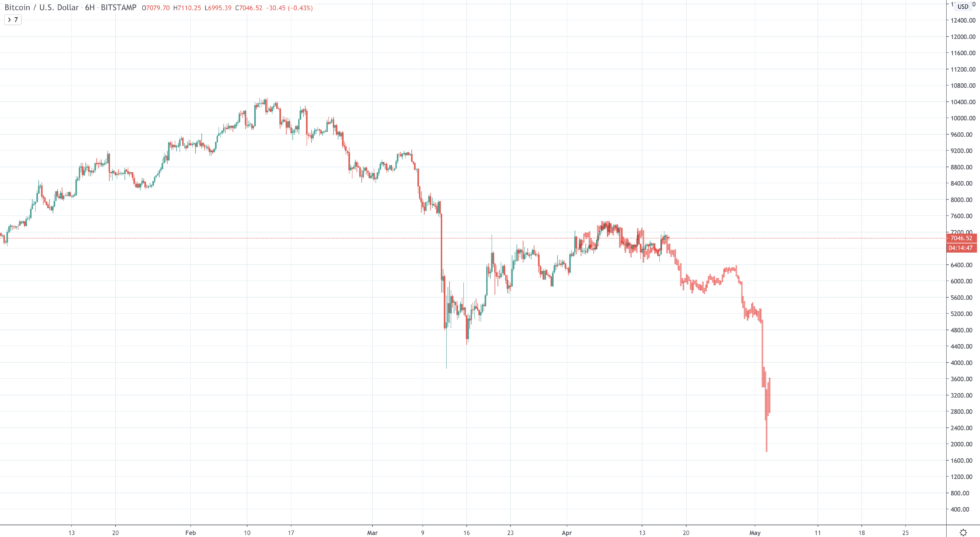 After breaking through resistance, a spike forms a left shoulder, then Bitcoin falls back down to support – only to pop back up and form the head. A right shoulder is later formed, but as traders prepare for the drop ahead, another shakeout pump wipes out shorts, ahead of the real drop downward.

The same pattern has just formed, and the second, right shoulder shakeout just happened ahead of yesterday’s daily close. But does Bitcoin price break down again, or does the asset push higher this time around, now that traders have been shaken out of their positions?

Queries about the highly anticipated event peaked in the week ending April 11, the highest in bitcoin’s (BTC) 11-year history. It moved down 18 percent as of press time but remains at elevated levels. It remains double what it was for the week ending March 21.

The sharp rise is indicative of an “increase in retail interest,” according to Mike Alfred, CEO of fintech and data company Digital Assets Data.

The cryptocurrency is set to undergo its third-ever reward halving next month, following which the per block reward would drop to 6.25 BTC from the current 12.5 BTC.

The popular narrative is that halving is a price-bullish event. Bitcoin’s price has witnessed a solid rally over the past few weeks. The top cryptocurrency is currently changing hands near $7,050, representing over 80 percent gains on the low of $3,867 registered on March 13.

As such, one may associate the recent price rally with the uptick in the search interest for bitcoin halving. However, it is doubtful anybody would be able to establish just how much of that rise in interest has translated into actual purchases of bitcoins.

It’s quite possible that the retail community is merely searching for information about halving and its impact on price, but is sitting on the fence. Even the analyst community is divided on the prospects of a post-halving price rally.

However, crypto asset analytics company Coin Metrics, in its recent “State of the Network” report concluded that miner-led selling pressure around bitcoin is likely to increase in the coming months.

Queries for the phrase “buy bitcoin” have not seen a similar spike.

The search term “buy bitcoin” is nearly a third down from when bitcoin suffered its “Black Thursday” crash on March 12.

Thus increasing retail interest in the upcoming halving may not translate into additional buying pressure around the cryptocurrency.

Yet, some observers cite the recent rise in the number of bitcoin addresses holding at least 1 BTC and at least 0.1 BTC as evidence of accumulation by retail investors ahead of halving.

The number of unique addresses holding at least 0.1 BTC also rose to a record high of 2,984,777. The number began rising sharply in February and maintained its ascent even during the March price crash.

“We are hearing and seeing increased retail interest. The unprecedented era of stimulus and money printing has pushed many people toward bitcoin as an alternative monetary system,” said Mike Alfred, CEO of Digital Assets Data.

The Federal Reserve cut interest rates to zero and launched an open-ended asset purchase program to counter the coronavirus-led economic slowdown. The balance sheets of G4 central banks – the Fed, Bank of Japan, European Central Banks and the Bank of England – have expanded to 40 percent of their respective nation’s combined gross domestic product, as noted by popular analyst Jeroen Blokland.

While the rise in the number of unique addresses does suggest accumulation, it should be noted that a single user can hold 50,000 coins in 50,000 different addresses. Therefore, these metrics do not necessarily represent retail accumulations.

The Top 10 Crypto Exchanges in 2020: Read this before choosing one Coming every Sunday, Hodler’s Digest will help you track every single important news story that happened this week. The best (and worst) quotes, adoption and regulation highlights, leading coins, predictions and much more — a week on Cointelegraph in one link. The halving has been and gone — and so far, it hasn’t been the… Around 20,000 devices with a total capacity of 70 megawatts were imported by unknown buyers and immediately started mining the cyrptocurrency. Igor Runets, CEO of BitRiver, Russia’s largest Bitcoin mining venue, told Kommersant newspaper the equipment arrived from Asia and was quickly installed in its own data centre facility in the Siberian industrial city of… Geoffrey Schwartz Top 3 price predictions for BTC, ETH, and XRP, Chris Hemsworth embroiled in a crypto scam, and the number of BTC available is less than you think. Today appeared to be a mixed day for all three major indexes. The Dow Jones Industrial (DJIA) rose 39.44 points (0.17%) to close at 23,515.26. The…