Ethereum continued to fall from the $170 resistance level, provided by the 100-days EMA, but managed to remain above $157 during the weekend. In today’s trading session, ETH fell beneath this to reach the $150 support provided by a .5 Fib Retracement.

The momentum seems to have shifted for ETH, largely caused by Bitcoin dropping to $6,700, and it is likely to see ETH beneath $150 at some point during the week.

The RSI has dipped slightly beneath the 50 level as the sellers take control of the market momentum. If it continues lower, ETH is likely to break the $150 support. Additionally, the Stochastic RSI produced a bearish crossover signal to send the market downward.

Against Bitcoin, Ethereum struggled to climb above 0.0235 BTC this week, causing the cryptocurrency to roll over and reach the support at 0.0229 BTC, provided by a short term .236 Fib Retracement.

The buyers are battling to defend this area, but if they break beneath, ETH is likely to head below the 0.022 BTC level.

The RSI remains above the 50 level, which shows that the buyers still are in control of the market momentum. If it can remain above 50, ETH can be expected to rebound soon and head toward 0.024 BTC.

Ethereum failed to clear the $162 resistance and declined recently against the US Dollar. ETH price is now approaching the main $145 support, where the bulls might take a stand.

Recently, Ethereum started a decent upward move from the $150 support area against the US Dollar. ETH price climbed above the $155 and $160 resistance levels.

However, the price faced a strong resistance near the $162 level and the 100 hourly simple moving average. There are also two key bearish trend lines forming with resistance near $161 and $165 on the hourly chart of ETH/USD. 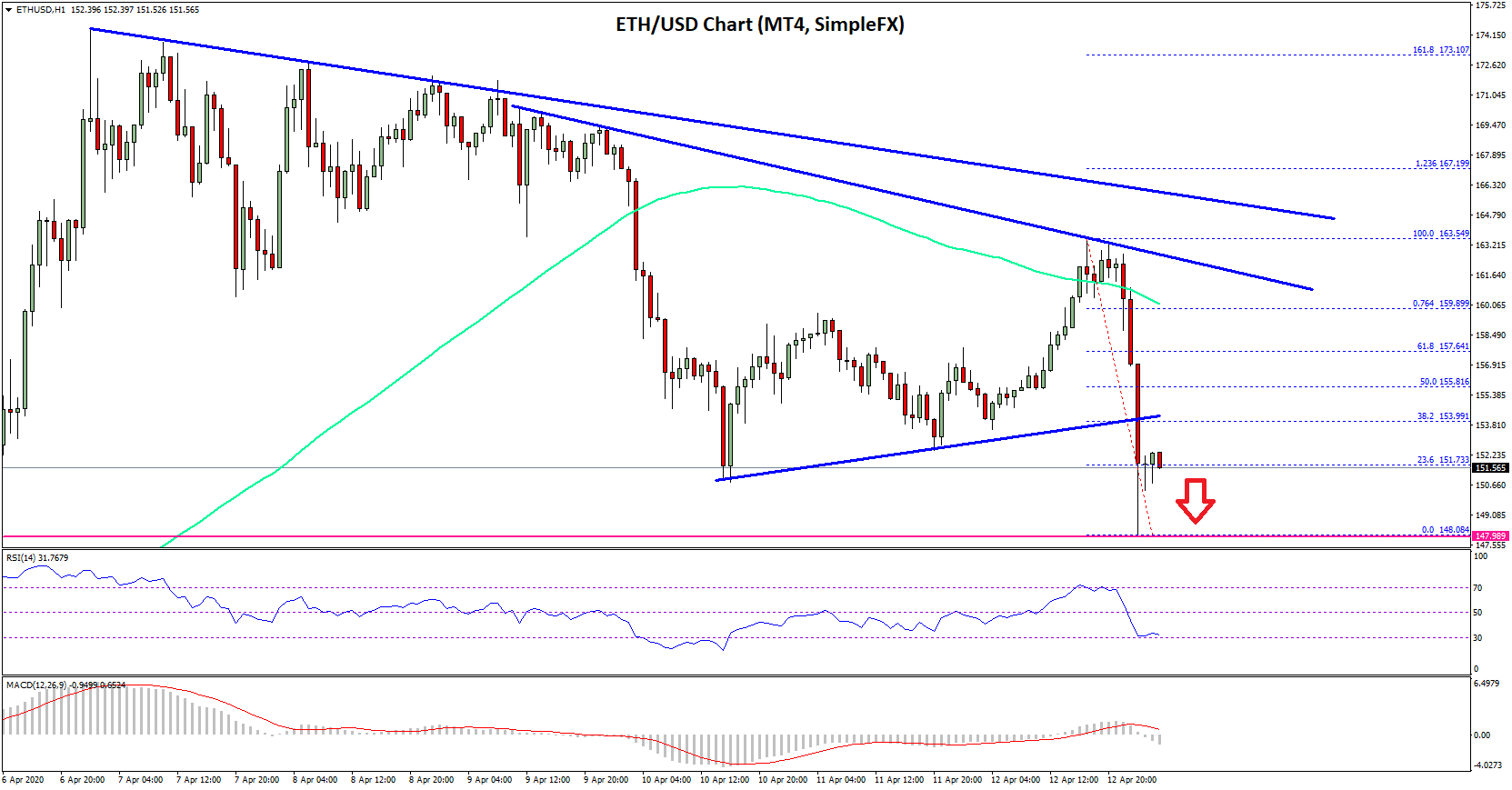 A swing high was formed near $163 and the price declined heavily. It seems like Ether was rejected above the $162 resistance and the 100 hourly SMA. The recent decline was such that the price even broke the $150 support and traded to a new monthly low at $148.

It is currently correcting higher and trading above $150. Besides, it is testing the 23.6% Fib retracement level of the recent decline from the $163 high to $148 low.

A successful close above the $162 resistance zone is needed to start a strong increase in the coming sessions. The next major resistance is seen near the $168 and $170 levels.

On the downside, there is a major support waiting near the $145 area (as discussed in the weekly analysis). If there is a bearish break below the$145 support, the price could dive towards $120.

Conversely, the bulls are likely to aim a strong recovery wave above $162 as long as the price is above $145.

Hourly MACD – The MACD for ETH/USD is slowly moving in the bearish zone.

Hourly RSI – The RSI for ETH/USD is currently just above the 30 level.

Why Ethereum Might be the Coin of the Year ⋆ ZyCrypto 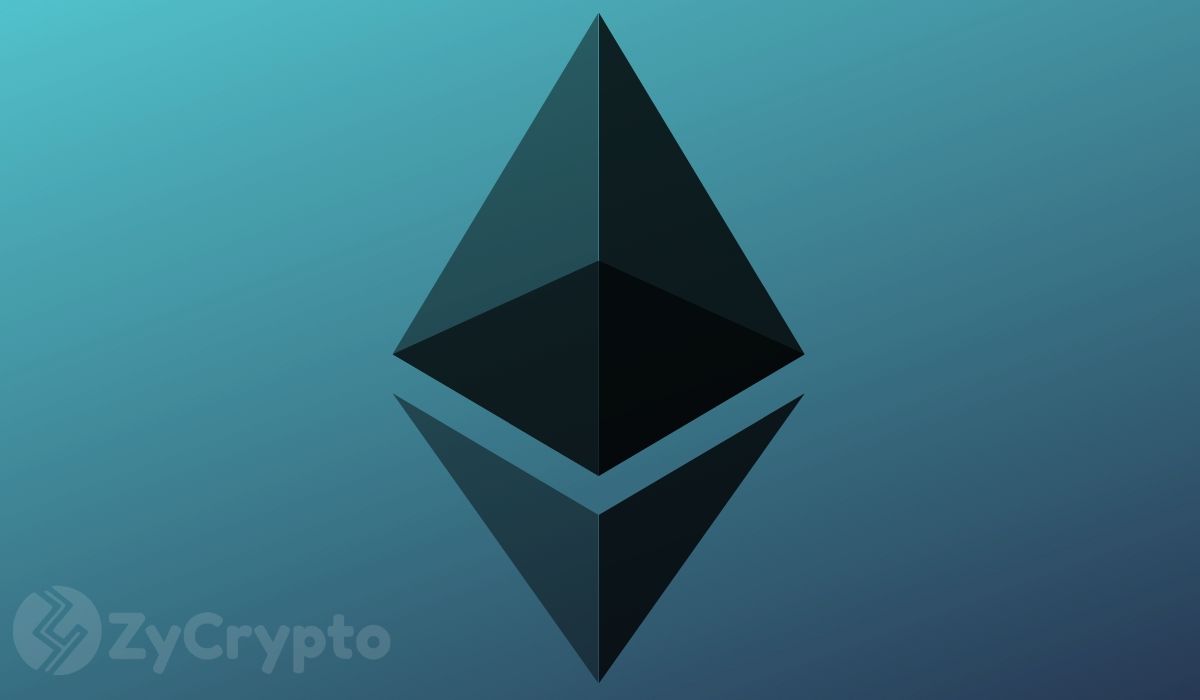 Ethereum is currently struggling to bounce back to its three-months-high of $281 in February 2020. However, experts have a strong hope that the digital asset will be the coin of the year ahead of all the popular assets.

The cryptocurrency has never been the same again after its early 2018 market bull-run. For some reasons, its response to price change has been a little slower since that impressive run, and failed to move with a huge margin when Bitcoin increased by over 50%.

Despite all these downsides, Ethereum is very popular among the various cryptocurrency predicting websites. According to CoinSwitch, Ethereum will probably finish the year with a trading price of $1449. This is a bit too much when its current price and rate of price change is considered. However, anything is possible in the world of cryptocurrency.

Bobby Ullery, a cryptocurrency expert also showed a strong belief in the Ethereum technology and explained why the digital asset can be the coin of the year. In his analogy, the cryptocurrency market capitalization will take a significant step to reach over $1 trillion in 2020.

The major contributors would be Bitcoin and Ethereum, making up to 25% of the total market cap. This means Ethereum would trade around $11,375 by the end of the year.

The global pandemic seems to have hit the cryptocurrency market very hard, but Ethereum is still making incredible progress in its adoption. The rate of adoption affects the price in the long run. In fact, its decentralized applications (dApps) recorded 1.4 million active users in 2019, better than its 800,000 users recorded in 2018.

Also, the ETH 2.0 project is another factor that can do magic. The project expected to be launched this year will have an impressive impact on the price as the team seeks to transition from proof of work to proof of stake. In addition, block validators will be required to stake 32 ETH in a bid to stake on the network instead of maintaining mining rigs.

This will likely cause a spike in demand and eventually push up the price. Also, it is possible that investors and miners who seek to benefit about 5% to 18% staking will hold their assets till the launching of the ETH 2.0, and the investors’ behavior will be a massive gain to the market performance of the digital asset.

In addition to the project adoption, Ethereum has gathered enough momentum over the year in preparation to stage a positive upshot. JACK GUEZ/AFP via Getty Images Bitcoin will rise in value no matter who wins the US election, according to Jeff Dorman, chief investment officer at cryptocurrency hedge fund Arca. A string of positive headlines for Bitcoin last week have lowered the fear-factor for investors to enter the digital market, Dorman told Business Insider in an… Lured by the sirens’ call, traders are wrapping their Bitcoin at record levels in order to yield farm and trade DeFi tokens. Published on September 17, 2020 After failing to hold the $11K mark and exposing what some analysts have described as a general apathy to trade BTC at these levels, Bitcoin (BTC) price is…