Bitcoin’s performance over the past few days has had a significant impact on the rest of the crypto-market. While the collective market cap surged, individual tokens on the charts prospered as well. However, this wasn’t the case universally as quite a few cryptocurrencies chose to move in the opposite direction. The cases of Monero, Ethereum Classic, and Decred highlighted such opposing behavior.

Monero, the crypto-market’s premier privacy coin, was one of the many alts to register positive movement in the month of September. However, late-October and November have been a different story, with XMR falling dramatically on the charts. In fact, while Bitcoin, a cryptocurrency Monero shares a high correlation with, surged on the charts, Monero fell, with the altcoin down by almost 8% on the charts over the week.

At the time of writing, XRM was trading well below its local top, with the privacy coin registering YTD returns of 142%, at press time.

The ensuing bearishness in the XMR market was evidenced by its technical indicators as while the Parabolic SAR’s dotted markers were well above the price candles, the MACD line, on the wrong side of the Signal line, was heading below the histogram.

Monero made headlines a few days ago after it was revealed that it was the target of a “clumsy,” Sybil attack.

Ethereum Classic, the 35th-ranked cryptocurrency on the charts, has fallen on the charts since the month of August, a month that saw the ETC network come under a series of 51% attacks. While ETC’s price wasn’t immediately affected, the market-wide depreciation towards the end of August fueled losses across the board for those owning Ethereum Classic bags.

While Bitcoin’s recent movement did push ETC’s value up by almost 10%, the bears in the market were quick to pull down the value of the crypto again, with ETC falling by over 5% soon enough.

As far as the indicators are concerned, both the Bollinger Bands and Awesome Oscillator implied that more movement to the downside may be in the works. While the fairly uniform bands were drooping downwards, the AO was in the negative.

The network was in the news a few weeks back after Chainsafe and ETC Labs announced the launch of an ETC-DAI Bridge.

Decred had been trapped in an endless cycle of sideways movement in October. However, November brought new joy to the altcoin’s market as DCR has surged over the past two weeks. In fact, in the previous week alone, DCR has climbed by over 30% on the charts. It should be noted, however, that at the time of writing, Decred was still trading well below its resistance level, a price point it last touched in mid-August.

Decred’s positive price movement was supported by the findings of its indicators as while the Chaikin Money Flow was well above zero and highlighted the strength of capital inflows, the Relative Strength Index was hovering right near the overbought zone.

Bitcoin has strongly outpaced Ethereum in the past month. In the past 30 days, BTC has gained approximately 50% as ETH has only rallied by 20-30%. While that’s far from anything to scoff at, it’s clear that a divergence has formed between the performance of Bitcoin and the performance of altcoins.

Analysts think that this gap will be closed in the months ahead as Ethereum is boosted higher by technical and fundamental trends.

One crypto-asset analyst shared the image below, which shows Bitcoin’s price action over the past few years in relation to Ethereum’s price chart. There has been a divergence as the charts indicate, with ETH trading far below its all-time high relative to Bitcoin.

This analysis suggests that in the weeks and months ahead, ETH will rapidly move higher as it attempts to catch up to Bitcoin.

For context, BTC is around 20% from its all-time high. Ethereum reaching a similar level would mean it would need to recover to at least $1,000, which is over 100% the current price.

There are also signs indicating that Bitcoin dominance could soon fall, which would increase the chance an altcoin rally plays out. Analysts are optimistic that an altcoin rally would especially benefit ETH. 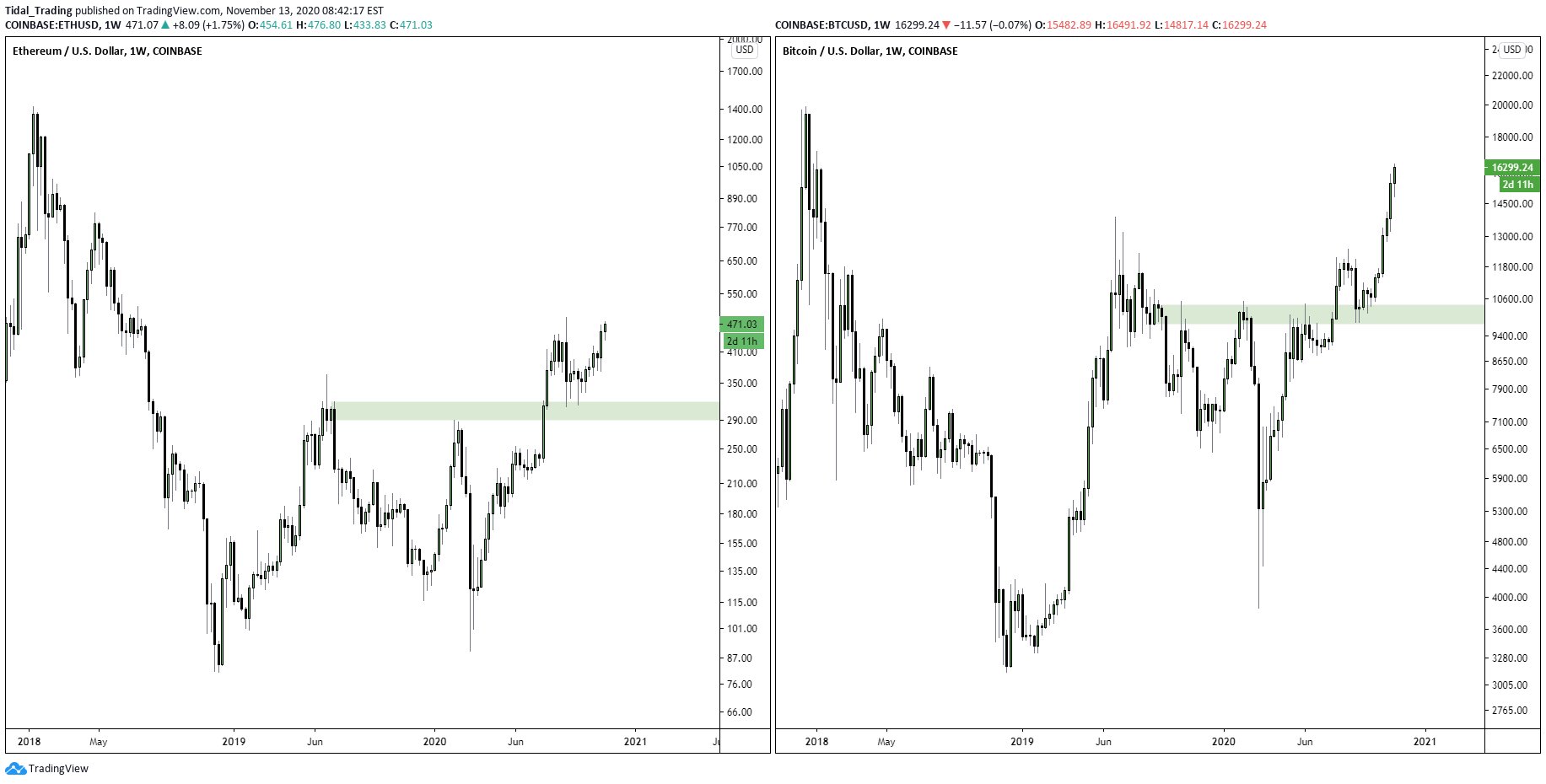 Data shows that there is a large amount of Ethereum accumulation that corroborates the bull case mentioned by analysts.

Grayscale reported a strong week for Ethereum institutional purchases earlier this month. The company also recently reported that it now has over $1 billion worth of ETH under management for its clients, which is a rapid uptick from the AUM (ETH) just months ago:

“MILESTONE: Grayscale #Ethereum Trust has just hit $1 billion AUM! As the first publicly-quoted $ETH investment product in the US and the second #digitalcurrency investment product to become an SEC reporting company, we’re proud of the milestones so far.”

Ethereum is set to continue higher as well due to the introduction of ETH2 staking, which incentivizes investors to take positions in the cryptocurrency. ETH2 users can earn a regular yield paid in ETH by running a validator node, which replaces miners on this new chain.

Geth had fixed the bug in early October following a disclosure, but it still existed in prior versions of Geth. The bug temporarily caused 80% of the network that runs on Geth to go down a different path than other clients.

Now, developers are reordering the disclosure process for security vulnerabilities in the aftermath of what some developers have called the biggest threat against Ethereum since 2016’s attack on The DAO.

Yet, blockchains, at their very core, are financial settlement mechanisms. The traditional methods of disclosing bugs in OSS can lead to undesirable outcomes for other players with money on the line.

In Friday’s All Core Developers’ call, Ethereum developer Micah Zoltu and Geth team leader Peter Szilágyi both disagreed with the issuance of a notification list for critical vulnerabilities. Zoltu claimed such a list would create an uneven playing field for projects, while Szilágyi said that every bug disclosure creates a weak point in Ethereum’s infrastructure.

For example, disclosing the bug early to service provider Infura – which most of decentralized finance (DeFi) uses to connect to the Ethereum blockchain – would be an unfair advantage against its competitors. Moreover, the consequences for the larger ecosystem could be severe if privileged information from the list leaked to adversarial parties.

Given the option again, Szilágyi said he would go about the recent disclosure in the same manner – meaning, keeping the consensus bug under wraps (although he said at one point during the call they should have let users know a past version of Geth held a vulnerability). Geth has done so for other consensus vulnerabilities, he said.

“Disclosure is a complex topic and user safety is paramount,” Prestwich concluded.

PayPal is updating its late-October promise to offer cryptocurrency usage to all of its US customers. As of Thursday, all US-based PayPal users can buy, sell, and hold Bitcoin (BTC), Ethereum (ETH), Bitcoin Cash (BCH) and Litecoin (LTC). Up until now, the service was only accessible to 10% of PayPal’s client base.

The company has plans to expand its crypto services even further in early 2021. According to PayPal’s press release, the online payments platform will allow its user base to pay with their cryptocurrency holdings at its 26 million merchants around the globe beginning in early 2021.

Coming in the first half of 2021, PayPal will extend its crypto services access to Venmo and some international users. The feature is made possible through PayPal’s partnership with fintech firm Paxos Trust Company.

PayPal’s expanding cryptocurrency rollout pushes it further down the path toward meeting its goal to “increase consumer understanding and adoption of cryptocurrency.”

Sparkpool, the largest ETH mining pool by hashrate, charges 1% fees, as does the Ethermine ranked at #2.

Binance Pool users can mine ETH with no fees for the first month. The pool uses the full pay-per share method for reward payouts, distributing both block rewards and transaction fees to pool members.

The expansion of a major exchange into crypto mining raises questions around the centralization of the Bitcoin and Ethereum hashrates, as mining pools dictate which updates and transactions are approved on Proof-of-Work (PoW) blockchain networks.

While Ethereum is poised to transition to Proof-of-Stake (PoS) as part of the ETH 2.0 network update, this is likely at least a year away.

Ethereum and the aggregated cryptocurrency market have been consolidating for the past few days, with Bitcoin’s recent swing past $16,000 helping to provide a base of support for ETH and other altcoins.

The crypto market’s ongoing uptrend is driven almost entirely by Bitcoin, but ETH and most other major altcoins are still woefully underperforming the benchmark digital asset.

There have been some early signs of a capital rotation event away from BTC and into altcoins, with a few DeFi tokens, in particular, seeing immense momentum throughout the past several days.

Some of these tokens were able to post gains clocking in at 100% or more in a mere matter of hours, signaling that they had previously been oversold.

That being said, where they trend next – and whether they can mark their recent lows as a long-term bottom – will depend almost entirely on Ethereum.

While speaking about ETH, one trader explained that he believes it could soon help altcoins rocket higher. For this to happen, ETH/BTC will have to print some large green candles in the near-term, or else further downside could be imminent.

At the time of writing, Ethereum is trading up just under 2% at its current price of $470. Earlier this morning, its price plunged to lows of $466 in a sharp downwards movement, but buyers rapidly stepped up and reverted this decline.

$470 appears to be an important level for ETH, and a high time frame close above it could help open the gates for it to see further upside.

If it can post a weekly candle close above this level, it could soon see some major momentum that sends it past $500.

One trader explained in a recent tweet that altcoins could extend their recent momentum and further confirm their recent lows as a long-term bottom if ETH/BTC can rally.

He notes that Bitcoin seeing some slowing momentum while Ethereum rallies will provide an ideal backdrop for higher risk tokens to grow upon.

“The only explanation I have for alts pumping with BTC is that BTC will stall here and ETH / BTC is prepping another scam candle. In other words, number go up. All numbers go up.”

It may all depend on where Ethereum’s Bitcoin pair trends.