Home › Ethereum news › Bitcoin doesn’t care who wins the US election — it will rise in value regardless of the outcome, a cryptocurrency fund chief says | Currency News | Financial and Business News

Bitcoin and other risk assets are not reliant on who wins the US elections, as they will shrug off market uncertainty regardless of the outcome, according to Jeff Dorman, chief investment officer, at cryptocurrency hedge fund Arca.

“They just want to know that there’s a winner,” Dorman told Business Insider in an interview on Thursday.

He said while a majority of investors expect a hung election, or one in which neither party has an overall majority, it doesn’t matter who wins because all risk assets will see a huge rise.

It benefited from a stream of supportive headlines last week. PayPal said it would enable users to buy, sell, and transfer Bitcoin, investor Paul Tudor Jones called it the “best inflation trade,” and fintech firms including Square, Microstrategy, and UK fintech Mode disclosed that they had bought Bitcoin as part of their cash reserves.

Dorman, who has been in the asset management business for 17 years, said a billionaire investor like Tudor Jones investing in Bitcoin won’t necessarily ignite a bull market, but it has lowered the fear factor of entering the digital asset market.

Dorman, who calls himself a Bitcoin bull, said fintech firms are disrupting the traditional finance industry, as they have the ability to move quicker on offering services for digital assets.

“Look at the stock prices of traditional banks versus fintech this year and see how high the PayPals and Squares and the likes are doing relative to JPMorgan and Bank of America,” he said. “It is a huge deal. It’s a bigger negative to banks than it is a positive to bitcoin, in the sense that you’re now offering an additional service that banks can’t provide,” he said about the potential of fintechs.

Dorman does not think Bitcoin is a safe-haven alternative to the US dollar, but said it could provide a hedge against inflation.

Why Bitcoin price and volume rising together is bad news for Ethereum, altseason

Bitcoin broke out of the $13,000 resistance level merely a week ago, which means those expecting Ethereum and altcoin prices to rise may have to wait a few months.

Bitcoin (BTC) is sucking up the volume from the entire cryptocurrency market as it continues to rally. This is causing the alternative cryptocurrency (altcoin) market to pullback, which has seen rising selling pressure and low buyer demand.

On Oct. 30, researchers at Santiment pinpointed the growing volume and dominance of Bitcoin, while Chainlink (LINK), Ether (ETH) and Binance Coin (BNB) struggled. They wrote:

“The dominance involving #Bitcoin is continuing to display itself, particularly via trading volume. When comparing other top blockchains in the past day, note the decline in $ETH, $XRP, $LINK, and $BNB trading volume, while BTC’s levels stayed high.”

At least in the foreseeable future, traders believe the so-called “altseason” is not returning, especially as Bitcoin outperforms altcoins.

Historically, during bull markets, the cryptocurrency market saw Bitcoin experience a rapid uptrend first. Then, altcoins followed, after BTC surged to a local peak or an all-time high.

Traders foresee a similar pattern playing out in the current price cycle, generally expecting altcoins to recover in 2021. But until BTC stabilizes and completes its rally, traders do not see a proper altcoin uptrend happening.

However, Michael van de Poppe, a full-time trader at the Amsterdam Stock Exchange, said an altseason in the first quarter of 2021 is possible. He said:

“Dominance hit the red zone here. Still waiting until December for a top structure on this one. After that -> Quarter 1 altseason.”

The problem with altcoins is the current dynamic of the cryptocurrency market. When Bitcoin rises quickly, altcoins fall as capital cycles back into BTC. If BTC drops, then altcoins drop in tandem, putting altcoins in a precarious position.

A pseudonymous trader known as “DonAlt” said he has been short Ether for several days. He said that if ETH does not recover against Bitcoin, then a broader altcoin market pullback is a possibility. The trader noted:

“I’ve been short ETH for a couple days now. That said ETHBTC is approaching support. So there is a good chance it bounces here, if it doesn’t the entire altcoin market gaps down quite aggressively.”

Similarly, a trader recognized as “CryptoCapo” said that the technical structure of altcoins is not compelling in the near term. For traders, that makes Bitcoin more attractive, given that it has portrayed strong momentum throughout October. He emphasized:

As long as the price of Bitcoin continues to surge rapidly and Ether lags behind, an altseason is highly unlikely in the near term.

A strong sign of an altseason would be a consolidation of the ongoing Bitcoin rally followed by a breakout in the price of ETH.

Considering that BTC/USD broke out of the $13,000 resistance level merely a week ago, technically, an Ether and altcoin market uptrend could still potentially be several months out.

So far, the capital in the altcoin market still seems to be shifting towards Bitcoin, however. As Cointelegraph reported, decentralized exchanges, or DEXs, have continued to bleed volume in October. This indicates that the demand for DeFi tokens is slowing down likely due to Bitcoin’s curren momentum.

The post Why Bitcoin price and volume rising together is bad news for Ethereum, altseason appeared first on BTC Ethereum Crypto Currency Blog.

Ethereum Could Rally Towards $432 if Bulls Flip One Key Level – news.kuaidiantou.vip

Bitcoin has been sucking all the oxygen out of the markets throughout the past couple of weeks, being one of the only cryptocurrencies to post consistent gains while most altcoins – including Ethereum – stagnate.

ETH’s lackluster price action as of late has been quite surprising, as it typically moves in lockstep with BTC.

Its inability to rally has also stopped many smaller altcoins from gaining any momentum, as they have been closely tracking Ethereum’s price action.

This trend may soon shift, however, as ETH is in the process of testing its $390 to $395 resistance.

One analyst contends that a break above this level could be all that is needed for its price to rocket up towards $432.

At the time of writing, Ethereum is trading up just under 2% at its current price of $389. This is a slight climb from its sub-$380 daily lows set just a handful of hours ago.

The cryptocurrency has long been struggling to break above $390 and $400 – with these two levels both acting as strong resistance in the past.

There’s a decent chance that they’ll continue suppressing its price action in the short-term, but a break above them could put a firm end to the pattern of consolidation and stagnation seen as of late.

While sharing his thoughts on where Ethereum might trend in the near-term, one analyst explained that a break above $395 could send the cryptocurrency up towards $432.

If this breakout does occur, it will also lead ETH past $420 – which is where an influx of selling pressure halted its latest rally.

“If ETH can flip $395 back to support, I think it’s headed straight to $432,” he said while pointing to the below chart.

The coming day should provide some insights into where Ethereum will trend in the days and weeks ahead.

The bulls are controlling ETC price. The movement of ETCUSD in the daily chart has been in a ranging format within a wide price level. The coin is moving in a zigzag way. The price action formed an ascending channel in which the price is touching the upper trend line and return to test the lower trend line. Last week, the bears dominate the market; the price tests the $5.7 resistance level but could not break it up, ETC declines to test the support level of $5.1.

The coin is trading over and around the two EMAs as it follows the price direction moving up and down within the channel. There will be a bearish price reversal should the bears can push down the price to break down the support level of $5.2. The price will decline to $5.2 and $4.8 level. In case the support level of $5.2 holds, trading within the channel will continue. However, the resistance level above $5.5 level is $5.7 and $5.9.

The relative strength index period 14 is yet to show the specific direction which indicates that ranging movement may continue.

Ethereum Recovers above the Critical Support at $380, May Resume Uptrending 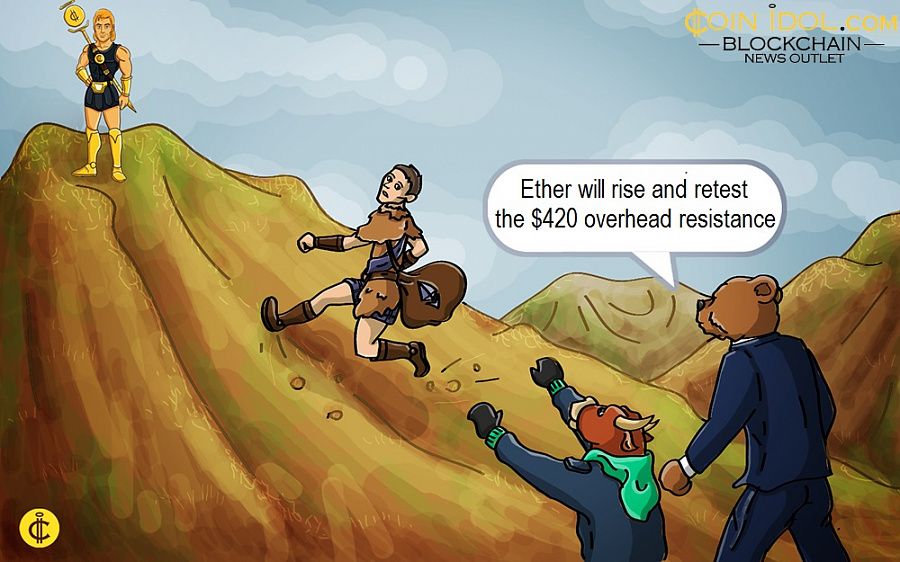 For over a week, Ethereum has been on a downward move. This current downtrend was caused by the bull’s inability to push ETH above the $420 resistance level.