Mode, a London Stock Exchange-listed company that brands itself as a “bitcoin banking app,” has revealed it now holds around £750,000 ($980,000) worth of bitcoin after announcing plans this week to put 10% of its cash reserves into the cryptocurrency.

Mode joins the likes of MicroStrategy and Square in making bitcoin part of its treasury investment … [+] strategy.

“We made the decision to start buying bitcoin about ten days ago,” Mode founder and executive chairman Jonathan Rowland said, speaking over the phone. “We wanted to put our money where our mouth is.”

Custody of Mode’s near-$1 million worth of bitcoin is being shared between U.S. cryptocurrency companies BitGo and Coinbase.

Mode, which now boasts 25,000 users of its iPhone-only bitcoin-buying app, according to Rowland, announced this week it planned to buy bitcoin as part of a long-term strategy to “protect investors’ assets from currency debasement” and said it would convert “up to 10% of its cash reserves into bitcoin.”

Earlier this month, Mode raised £7.5 million when it floated on the London market and is aiming to use the funds to reach 1 million users within three years.

Rowland said he expects Mode stock to move with the price of bitcoin in the future.

“There’s an element of Mode trading on the price of bitcoin,” He said. “Mode shares can give people a proxy to owning bitcoin. It gives people an option to get exposure without buying bitcoin.”

MORE FROM FORBESBitcoin Price: What Next After Fresh Surge Toward $14,000?By Billy Bambrough

The bitcoin price has soared over the last week, pushed higher by the chair of the Federal Reserve … [+] Jerome Powell’s remarks on digital currencies and PayPal’s addition of bitcoin-buying and spending services.

After a difficult couple of years, bitcoin has found fresh support in 2020 due to a return to ultra-low interest rates around the world and as a potential hedge against the inflation some see on the horizon—attracting the attention of some big-name investors.

“We met with Jack Dorsey and spoke to him about adding bitcoin to treasury assets last year,” said Rowland, who added he believes bitcoin will eventually become “the only real global currency.”

Bitcoin Breaks To New 2020 High on PayPal News: This Was The Weekly Crypto Market Update

This week was particularly interesting in the cryptocurrency markets. Bitcoin’s price charted a new 2020 high, surging to as much as $13,217 on Binance. The entire market cap surged and gained almost $40 billion throughout the past seven days.

The catalyst for this major move was PayPal. The world’s largest online payment processor announced that it would allow its customers to buy, sell, and store cryptocurrencies as soon as the next few weeks for US-based users. The rest of the world would have to wait for the first half of 2021.

To anyone wondering, PayPal has millions of merchants in its network, and the CEO of the company said that they would work actively into incorporating digital currencies in their system. Moreover, it’s also interesting to see how banks and regulators will react to the news. Almost every bank accepts PayPal transfers, but almost none of them accept Bitcoin transfers.

Almost immediately after that, reports started circling, indicating that PayPal is in talks with BitGo, a leading Bitcoin custodian, over a potential acquisition deal.

In general, the shift towards online payment processing and digital currencies becomes even more apparent in 2020. Whether it’s because of the global pandemic or for other reasons is something that remains to be determined, but here’s an overall outlook of the performance of major companies and banks. 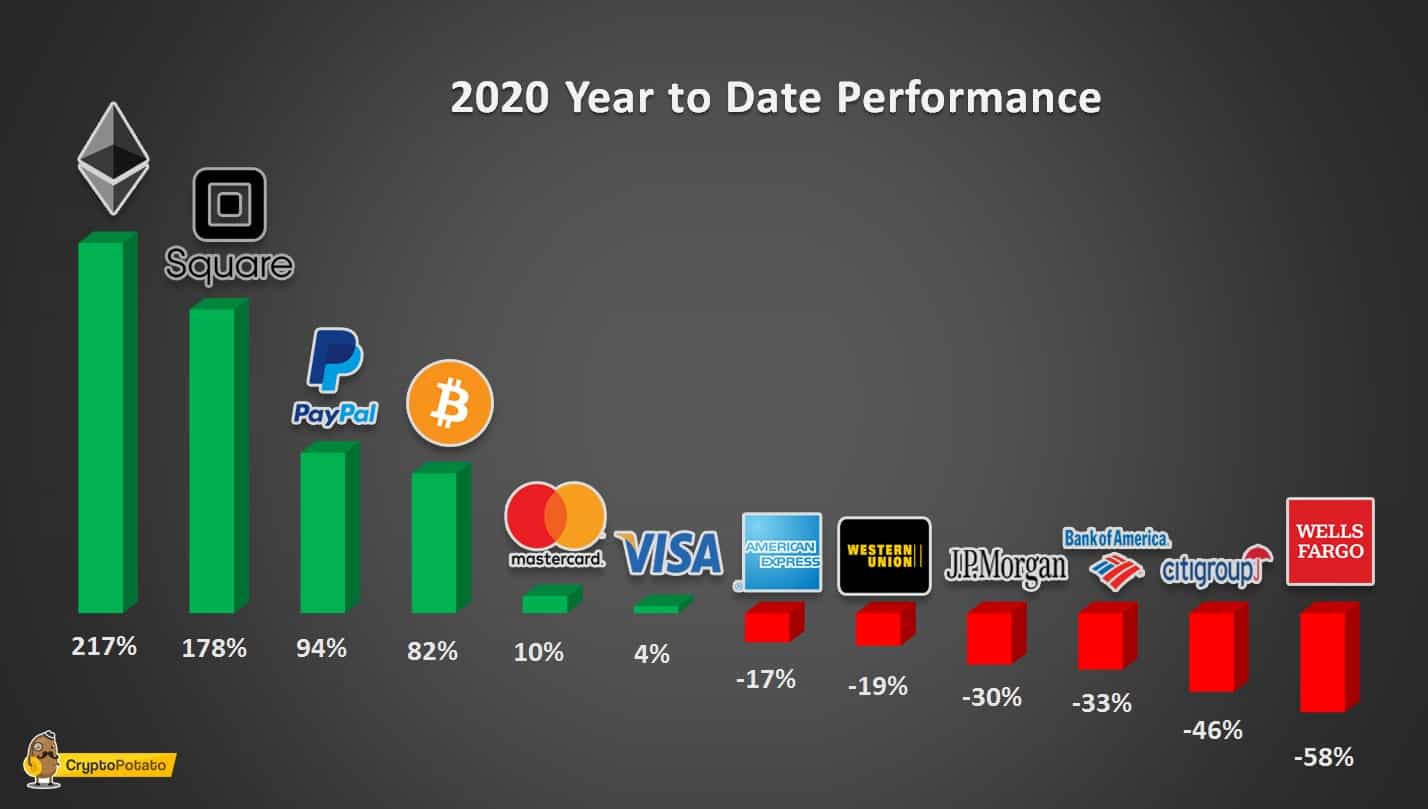 Elsewhere, the billionaire investor Paul Tudor Jones III doubled-down on his Bitcoin bet, saying that he likes the cryptocurrency even more following the latest rally and that it’s the best “inflation trade.”

It’s also worth noting that regulators continue their increasing involvement in the field. This week, a Bitcoin mixer was fined $60 million by FinCEN.

It surely was an intensive week, and it’s very interesting to follow the market as we are about to enter the last two months of 2020.

PayPal to Enable Bitcoin and Crypto Purchasing and Selling. The world’s largest online payment processing company, PayPal, has announced that it will allow its users to buy, sell, and store cryptocurrencies. The US-based customers will be able to do so in the coming weeks, while the rest of the world would have to wait until the first half of 2021.

Bitcoin Could Register Second Highest Monthly Close in History: Peter Brandt. Bitcoin might be in for the highest monthly close in its relatively short history, according to popular analyst Peter Brandt. That is, of course, if it manages to upkeep its momentum until the end of October.

HODLers: Most Crypto Investors Hold Majority In Bitcoin Over Altcoins, Survey Finds. According to a recent survey, the majority of cryptocurrency investors hold most of their portfolio in Bitcoin. This comes somewhat expectedly, given the latest developments on the market and BTC being able to chart a new 2020 high.

The Biggest Concern of Bitcoin Investors Until The End Of 2020: Will Trump Get Reelected (Survey). In a survey conducted by CryptoPotato, investors revealed that their biggest concern related to the price of Bitcoin in 2020 is the upcoming US 2020 Presidential Election and whether or not Donald Trump will get reelected.

Bitcoin Mixer Penalized by FinCEN With $60 Million in Fines. The United States Financial Crimes Enforcement Network has managed to strike another blow to privacy enthusiasts. The watchdog fined a Bitcoin mixer with as much as $60 million in civil penalties.

This week we have a chart analysis of Bitcoin, Ethereum, Ripple, Litecoin, and Bitcoin Cash – click here for the full price analysis.

Virgil Griffith, the former Ethereum Foundation researcher accused of conspiring to violate U.S. sanctions against the Democratic People’s Republic of Korea, filed a motion on Thursday to dismiss the charge against him on the grounds that prosecutors from the Southern District of New York have failed to properly state Griffith’s crime.

Griffith, 37, was arrested by FBI agents on Nov. 28th, 2019 following a presentation at a conference in North Korea in April.

Prosecutors allege that at the conference Griffith rendered services to the North Korean government in the form of “valuable information” he provided to DPRK officials, and that he “participated in conversations” about how to use blockchain technology to avoid sanctions.

Griffith, meanwhile, contends that his presentation was a “highly general speech based on publicly available information.”

Thursday’s motion to dismiss the charge now hinges on whether or not planning and giving this presentation can be interpreted as a conspiracy to violate sanctions.

In the motion, Griffith argues that because he was not paid for his attendance and was not under contract as a consultant, he was not providing a “service” to the DPRK, and that his speech is protected from U.S. government prohibition under the First Amendment.

Additionally, Griffith argues that his presentation explicitly falls under an exemption in the International Emergency Economic Powers Act for the sharing of “information” and “information materials.”

“If the speech Mr. Griffith purportedly gave is not ‘information,’ then nothing is.”

As Cointelegraph has previously reported, Griffith’s case has divided the crypto community.

“I don’t think what Virgil did gave DPRK any kind of real help in doing anything bad. He delivered a presentation based on publicly available info about open-source software. There was no weird hackery ‘advanced tutoring.’ […] Virgil made no personal gain from the trip. […] I hope U.S.A. […] focuses on genuine and harmful corruption that it and all countries struggle with rather than going after programmers delivering speeches.” Bitcoin Trading Near Make-or-Break Levels: Here’s Why $9,400 Holds The Key

Ethereum Holds Strong Above $200, Can ETH Follow Bitcoin’s Rise
Did the article help? Rate it