Ethereum’s 2.0 (ETH2) upgrade is expected to begin to roll out in the near future. The upgrade has long been awaited by crypto investors across the industry, with it facing a number of delays.

There was a scare a number of weeks ago after a testnet for Ethereum 2.0 failed to launch properly due to some consensus issues related to some client bugs. Those have since been fixed, meaning that the actual launch is nearing.

A blog post shared by Ben Edgington, an Ethereum 2.0-focused developer at development studio ConsenSys, believes that the rollout of the upgrade is right around the corner.

He wrote that a “v1.0.0 release candidate 0 has been published.” Should the candidate be accepted, it will be rolled out when developers think it is necessary.

This new candidate has a number of changes compared to the previous iteration, which should help to eliminate “pain points” that were present in “the previous genesis runs.”

Along with the publishing of a candidate for ETH2, the deposit contract for the upgrade’s staking mechanism is expected “any day now”:

Basically, as I understand it, we are good to go: deposit contract in the next few days; beacon chain genesis 6-8 weeks later. (This is not an official statement!)

“Meanwhile, be careful out there. Many fake deposit contracts and Launchpad front-ends will erupt in the coming days. Look out for the official anouncements: do not send Eth to random contracts; this is not DeFi.”

Regarding testnets for Ethereum 2.0, he wrote that testnets aren’t cutting it for users, referencing declining participation:

“Medalla, meanwhile, is suffering from very low participation. I think people are getting a bit bored of testnests. It’s time to move on. See this week’s Implementers’ call for some discussion about its future. I wrote a thing about why the testnets don’t really cut it any more, and we need to launch Phase 0 asap.”

Analysts think that the ETH2 launch will trigger a strong rally for the Ethereum price.

The upgrade is a validation of Ethereum’s long-term potential, some say. This is especially pertinent as Ethereum faces competition from newly-launched platforms.

LTC/USD are traded at the level of 47.64 and continue to move within the growth and ascending channel. The capitalization of the Litecoin cryptocurrency at the time of the publication of the forecast is $3,162,044,716. Moving averages indicate a short-term bearish trend for Litecoin. Prices returned below the area between the signal lines, which indicates pressure from the sellers of the asset and a potential continuation of the fall from the current levels. At the moment, we should expect an attempt to develop a decrease in the value of a digital asset and a test of the support level near the 46.55 area. Where can we expect a rebound again and continued growth in the Litecoin rate with a potential target above the level of 61.85. 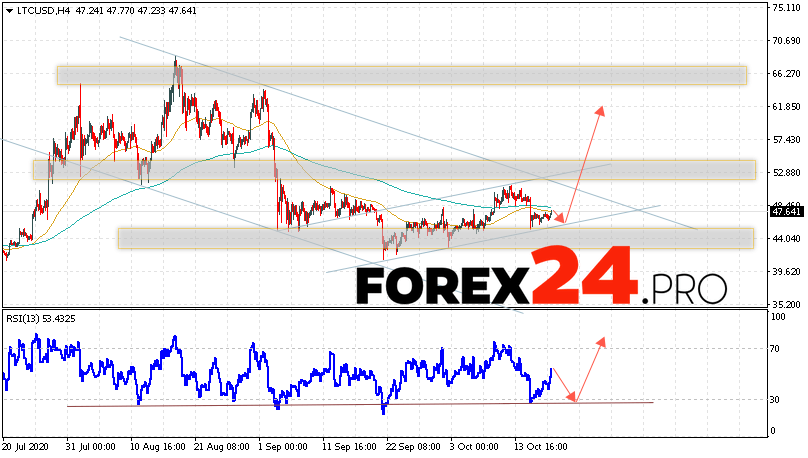 Litecoin Forecast and LTC/USD Analysis October 20, 2020 suggests an attempt to correct and test the support area near the level of 46.55. Where can we expect a rebound and continued growth in LTC/USD to the area above the level of 61.85. An additional signal in favor of Litecoin rise will be a test of the trend line on the relative strength index (RSI). Cancellation of the growth option will be a fall and a breakdown of the 42.55 area. This will indicate a continued decline in cryptocurrency with a target below 37.55. A great number of Non-fungible tokens (NFTs) have been selling on various marketplaces this year creating tens of thousands of dollars in NFT sales. One particular platform called The Sandbox has been selling virtual land parcels for thousands of dollars worth of ether. The Sandbox is a virtual world that lets players create and own blockchain-backed virtual items in the metaverse built on the Ethereum network. On October 18, Sandbox revealed two 6×6 estates had been sold for 210 ether ($76,931) or 28x the original price.

In the future, digital currencies will be an integral part of the online world individuals call the “Metaverse.” The Metaverse is essentially a persistent virtual space converged with virtual reality. Current blockchain applications allow people to not only create 3D virtual spaces and items, but also own them in an immutable fashion as well.

At the end of July, news.Bitcoin.com reviewed the virtual world dubbed “Decentraland,” and observed all that has been built since it was invoked over four years ago. However, there’s another virtual ecosystem being constructed called The Sandbox. The player-created online world has been the fifth-largest seller in terms of NFT trade volume, according to today’s nonfungible.com data.

The Sandbox blockchain-based game was created by the startup TSB Gaming, a subsidiary of the firm Animoca Brands. Data shows that the game has seen an aggregate total of 42,420 sales worth $2.2 million to-date. During the last 30 days, $555k worth of Sandbox NFT sales were recorded by nonfungible.com.

Basically The Sandbox game leverages a voxel editor so users can create 3D assets and develop on land parcels that can be purchased with the project’s native token SAND. The assets participants create can also be sold in the Sandbox marketplace for SAND as well. On Sunday, the project’s official Twitter account revealed two 6×6 estates had been sold for 210 ETH worth over $76k.

The cofounder of The Sandbox, Sébastien Borget, said the two 6×6 estates sold were a record sale on the platform. The 6×6 estates were sold next to the virtual Atari theme park region. The established video game maker Atari joined forces with the blockchain game back in March, and detailed a number of Atari favorites will be made available in the 3D Sandbox world.

Additionally, Atari detailed that Sandbox visitors will be able to obtain Atari-issued in-game assets. The firm also announced atarichain.com and the Atari Token (ATRI) offering last week, but it’s uncertain if ATRI will be available to use in the Sandbox game after launch.

Sandbox is betting big on the blockchain-based virtual ecosystem, but it remains to be seen how popular the platform will become. Decentraland’s popularity has waned since the virtual world’s initial launch, and the app has dropped to the seventh-most used NFT-based ether app in terms of NFT trade volume.

Most of the virtual worlds online like Altspace-VR lack participants and it may take a while for blockchain-based VR attempts to catch on. Besides Roblox and Minecraft, hundreds of VR and voxel-based worlds have seen lackluster adoption and only a small amount of users. However, Sandbox is adding well known partners to the equation and it may give the platform a boost.

Sandbox’s parent firm Animoca Brands recently announced a partnership with Cloudco Entertainment, the owner, content producer, and global distributor of the Care Bears. In addition to Atari and Cloudco, other well known firms like Square Enix, Shaun the Sheep, and Rollercoaster Tycoon World have also partnered with Sandbox.

Here is how other cryptocurrencies have performed in the last 24 hours:

Markets tend to behave in massive cycles. One of those cycles is the previous Bitcoin (BTC) price cycle from 2014 to 2017. However, within those cycles, are multiple smaller cycles that could often repeat.

A similar approach and analysis can be made for Ethereum’s Ether (ETH), which is outperforming BTC year-to-date, as the majority of its impulse upward moves have corrected heavily to retest previous resistance levels.

When is the best period to buy ETH/USD and what potential levels can be hit in the next move? Let’s take a look at the charts.

The weekly chart shows a clear breakout above the 100-week and 200-week moving averages (MAs) earlier in the year. A breakout that also caused the price to break above the crucial resistance level of $300.

This $300 barrier has been a resistance zone for close to two years, ever since the bear market for Ethereum began in February 2018.

Since this accumulation period, the price of Ether has been hovering between $80 and $300. Finally, after almost two years, ETH/USD broke above $300, rallying toward the next resistance zone around $500.

However, a breakout during this run is unlikely as the crypto markets still appear to be consolidating within a new cycle. This buildup is relatively dull and doesn’t provide massive volatility.

Another clear signal of this accumulation period is the incentive to continually back-test every previous resistance zone as support. These retests add further momentum for more upside later on.

a higher high is already established as the chart is showing regarding the current trend. After such a higher high, the market is looking for a clearcut higher low to confirm the existing trend switch.

However, the crucial question in this regard is at which level can a higher low be established? The most profound answer to this question is the previous resistance at $300 becoming support.

But even if the $300 level doesn’t support, the 200-week MA at $220-245 can sustain and confirm the higher low. These two zones should be watched for investors to see whether buyers are stepping in. The $300 level already held as support, increasing the likelihood of Ether holding above this level.

Second, as the markets tend to move in substantial cycles, new potential resistances can be defined. The impulse move usually lasts the shortest as accumulative and corrective movements tend to take the most prolonged period.

If the $300 area sustains support, new resistances and levels can be defined through horizontal price levels and the Fibonacci extension tool.

The next levels of potential resistance can be found through these indicators and tools at $600 and $775-825.

This would mean that Ethereum could surge more than 100% in the next impulse move, driving the markets to the next level. If Ethereum 2.0 gets released, the strength will only increase, indicating that the second level has been most likely reached.

Multiple arguments and analysis can be derived from the ETH/BTC chart. One of them is the range-bound construction between the 100-Week and 200-Week MA, which indicates that the upwards move was rejected at the 100-Week MA.

However, another indication is made that the price of Ethereum provided weakness throughout the fourth quarter of the year.

If the bottom construction is finished and history repeats itself, potential resistance zones can be found at 0.058 and 0.072 sats, similar to the USD values.

The daily chart of ETH/BTC is showing clear support at the 0.03 sats level. However, this support level has seen several tests, meaning another test would likely cause the price to drop further south.

This isn’t horrible, however, as the lower support level didn’t see a confirmation test (a support/resistance flip) yet. Traders should watch 0.026 sats if the level of 0.03-0.031 sats is lost for support.

In general, tremendous opportunities may be arising in the markets in the coming weeks/months as 2020 comes to a close, particularly if history repeats itself.

Moreover, the further you get into a cycle, the bigger the impulse moves will be. Another run of 100%+ for Ether is, therefore, likely to occur if the $450 breaks.