Tyler and Cameron Winklevoss, noted internet entrepreneurs and crypto billionaires, believe weakness in the U.S. financial system and other factors mean bitcoin could one day reach $500,000 per coin.

This week was quite eventful for crypto and traditional markets and investors will note that as central banks introduce new monetary expansion policy, Bitcoin (BTC) and altcoins have begun to forge their own path.

Before reading the rundown, catch up on the most-read stories centered around the price of Bitcoin, the macroeconomic picture, and the DeFi phenomenon gaining traction.

Central bank policies first crafted in the wake of the Great Recession, which were then seen as extraordinary, have become ordinary — and concerns are creeping in from all corners of the globe.

Quantitative Easing, low-interest rates for prolonged periods, stimulus payments, and other actions have increasingly been used to prop up the economy, jobs, and financial markets ailing from governments’ response to the COVID-19 pandemic.

This has caused the Federal Reserve and U.S. Treasury to once again rewrite fiscal policy rules to keep the country from sinking under the weight of what seemed to be almost certain financial collapse.

The scope of these efforts is a sharp turn from previous measures such as TARP that focused largely on the financial industry — and they’ve led us to a seminal moment for Bitcoin and other digital assets.

That chill you feel isn’t the end of summer, it’s a collective shiver after remarks made this week by Fed officials in Jackson Hole.

Federal Reserve Chairman Jerome Powell acknowledged the Fed’s new approach this week, explaining that the onus is on bolstering the U.S. labor market with fewer worries about an uptick in inflation.

Tellingly, Powell acknowledged that past declines in unemployment led to concerns about rising inflation and prompted the Fed to raise interest rates — the central bank will no longer take such actions.

This is a potentially frightening prospect for anyone interested in the value of money and has seen the disastrous effects of an unrestrained expansion of the money supply in countries like Venezuela, Russia, Brazil and elsewhere.

The reason why it matters for digital assets is two-fold: technology and anti-inflation potential — an ability to tap into unbanked communities and spread the “credit and confidence.”

Going forward, it is worth keeping an eye on the broader commodities complex and also how expectations develop. Correlations that may apply now may no longer be true, especially those related to inflation.

Not surprisingly, Bitcoin (BTC) and gold traded in lock-step for much of the session, initially spiking higher, before reversing and falling to new session lows.

Another week brought another wave of capital inflows to DeFi projects. The total amount locked is now at $7.22 billion, and the top three assets, which include the likes of Aave, Maker and Curve, with over $1 billion locked each. 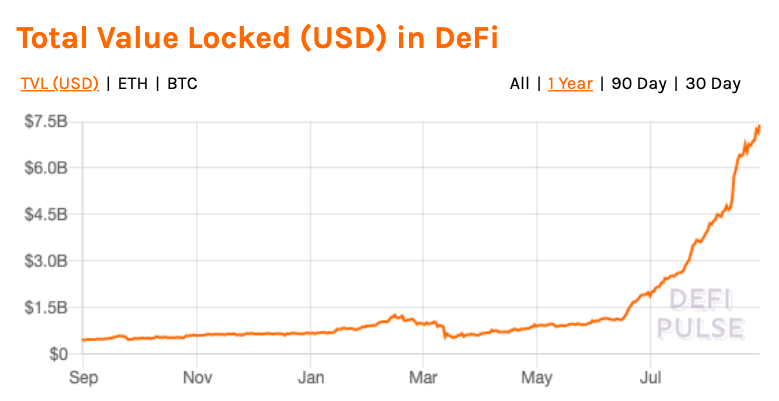 The total number of Bitcoins locked in the ecosystem has now risen to 46,086, with wBTC accounting for 30,798, followed by renBTC with 8,408. Surprisingly, even though transaction costs on the Ethereum network have fallen from recent highs, it failed to translate into a meaningful rise in trading volumes on decentralized exchanges.

This suggests that the market likely pressured out smaller participants and it is now dominated by larger funds and token holders.

As such, future growth is more of a byproduct of innovation and further development of the underlying infrastructure — capital flows do not seem to be an issue, as evidenced by ongoing growth across just about every known DeFi platform.

According to the latest post by the CME, the number of unique accounts that have traded Bitcoin futures since launch exceeds 5,400. As new participants enter the market, the number of Large Open Interest Holders (LOIH) continues to grow. And, on that note, a record number of 94 holders was established the week of Aug. 18. 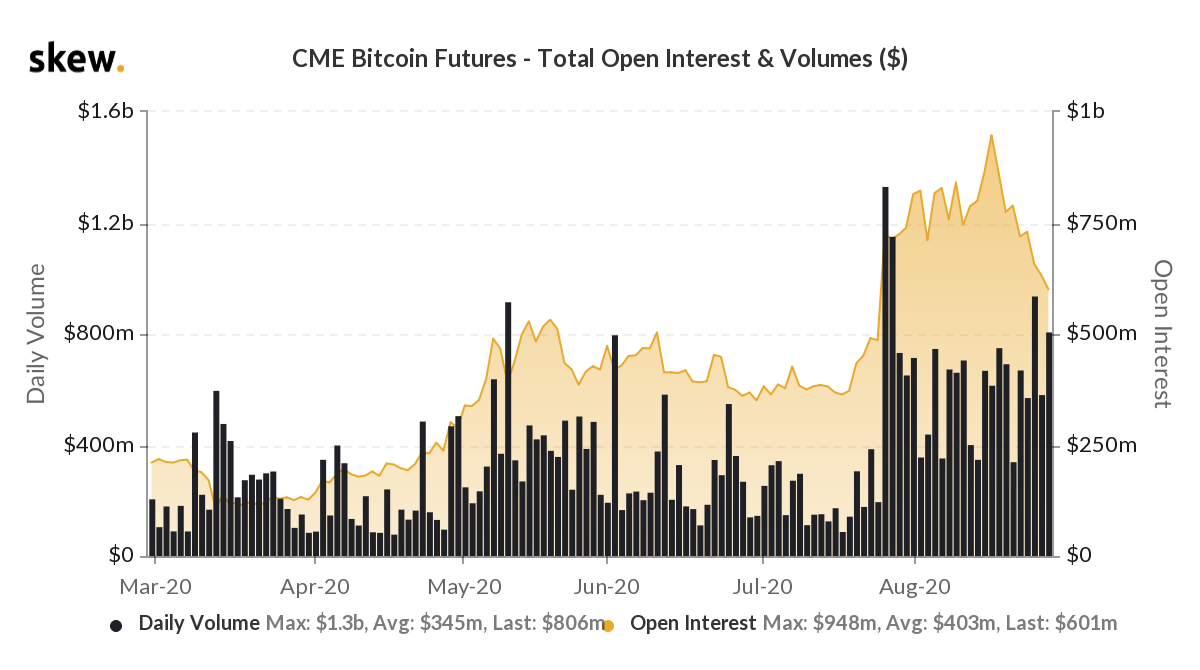 Furthermore, the number of LOIH has risen sharply since Q4 2019, which indicates growing institutional interest because an LOIH is a holder of at least 25 contracts. A record number of 94 holders was established the week of Aug. 18.

In addition to that, along with the rise in LOIH, average daily open interest has been steadily increasing since March and for the last four months has exceeded average daily volume (ADV).

Ripple Labs Inc. is being sued in an Australian court docket for allegedly infringing a trademark belonging to a number of native banks. A lawsuit filed by the New Funds Platform Australia (NPPA), a three way partnership between the Reserve Financial institution of Australia and 13 home banks, claims that Ripple copied its PayID model.

NPPA’s service has been in existence for greater than two years, serving to to facilitate immediate funds throughout 68 million Australian financial institution accounts.. Ripple, issuers of the XRP cryptocurrency, launched its cross-border funds service, additionally referred to as PayID, in June, in partnership with 40 companies.

Based on a report by The Age, an area publication, NPPA is looking for each damages and a everlasting injunction stopping Ripple from utilizing the PayID model in Australia. The funds platform alleges that the American crypto agency lifted its registered trademark to supply intently associated providers.

Ripple has provisionally agreed to geoblock its service from Australia, in an preliminary listening to on the nation’s Federal Courtroom this week, the paper reported.

“Ripple’s service is clearly supplied below a mark that’s considerably similar with or deceptively just like the NPPA PayID registered trademark and in relation to the identical or related providers,” mentioned NPPA in its lawsuit.

The banks, which embody ANZ, Westpac and NAB, declare Ripple’s PayID service infringes the native Emblems Act. They are saying it “constitutes deceptive and misleading behaviour” below Australian Client Legislation and the Australian Securities and Funding Commissions Act.

NPPA mentioned the service might “irrevocably harm” its model. It alleges Ripple’s PayID might also could possibly be used to facilitate unlawful actions “reminiscent of cash laundering, terrorism financing and human rights abuse”.

Ripple’s XRP digital forex is the world’s third largest, with a market capitalization of $12.25 billion. Throughout the April to June 2020 quarter, the San Francisco-based firm reported that over-the-counter gross sales of XRP soared 1,760% to $32.55 million from $1.75 million the earlier quarter.

What do you consider Ripple’s alleged trademark infringement? Tell us within the feedback part under.

Bitcoin bounced back from Thursday’s drop at a time when more of the cryptocurrency is locked in DeFi than ever before.

Bitcoin’s price trended upward Friday, going as high as $11,552 on spot exchanges such as Coinbase. “Bitcoin has rotated around the most traded price at $11,500,” said Daniel Koehler, liquidity manager at cryptocurrency exchange OKCoin. “Looking down, the next significant support levels are $10,800 and $10,550.”

Related: The End of an Era? Why Bitcoin and MMT Won the Week

“After its recent fake breakout above the $12,000 resistance level, bitcoin saw a short-term trend reversal in its broader bullish trend started in June,” said Pavageau. “On the long term the Fed’s comments are very positive for bitcoin and the crypto markets as a safe heaven because of their limited supply.”

On the derivatives side, the market saw lots of expirations Friday, with over $740 million in bitcoin options expired on the Deribit platform alone. The expirations were expected to induce some volatility; instead, bitcoin’s price steadily trended upward during the day.

“There’s still an element of absorbing what has happened recently in the DeFi markets and the situation after Powell’s statement,” said Chris Thomas, head of digital assets for Swissquote Bank, referring to decentralized finance. He was “surprised there wasn’t a more aggressive move in the last few days, but it’s also good to have some calm for a while.”

The amount of bitcoin locked in DeFi, has hit a new high. Over 55,500 BTC is now “locked” in DeFi, which means it is being used for liquidity, gaining a percentage return or yield. This locked amount is the highest yet.

Jean-Marc Bonnefous, managing partner for Tellurian Capital, which has been investing in crypto projects since 2014, says “fear of missing out,” or FOMO, is one reason so many “hodlers” are locking their bitcoin in DeFi.

“I assume the BTC holders want to participate in the DeFi opportunities so they will need to wrap their bitcoin into those applications to get some yield,” he said. “Too tempting I guess.”

Bitcoin mining is big business. In just ten years, bitcoin mining, where bitcoin tokens are rewarded to those that maintain the bitcoin network, has morphed from a bedroom-based, money-making hobby into a billion dollar industry.

With bitcoin miners in China dominating the network, the move is expected to go some way to rebalance the distribution of those that maintain the bitcoin network—though Foundry chief executive Mike Colyer doesn’t see China as “a major threat” to bitcoin, despite recent warnings from some in the crypto industry the Chinese government could “effectively block or reverse [bitcoin] transactions.”

China accounts for around 65% of the bitcoin network computing power, but Digital Currency Group is … [+] investing $100 million in bitcoin mining in North America to change that.

“Over the past three or four years the story has been on China dominating [bitcoin mining],” Colyer said, speaking over the phone.

In May, research from University of Cambridge revealed China, where bitcoin mining pools have prospered thanks to cheap, renewable electricity, accounts for 65% of the bitcoin network’s computing power, with the U.S. the second-largest bitcoin mining country, contributing 7%.

“I personally don’t view that as a major threat to bitcoin,” Colyer said. “The economic investment that [an attack on bitcoin] would require is immense.”

It’s thought it would require almost $700,000 per hour to launch an attack on the bitcoin network, according to calculations made by Crypto51.

Last week, the executive chairman of payments network provider Ripple, Chris Larsen, warned in an opinion piece published in The Hill that as the majority of bitcoin network computing power is located in China, the “Chinese government has the majority needed to wield control over those protocols and can effectively block or reverse transactions.”

Others in the bitcoin and cryptocurrency community have dismissed the idea.

“Just because there are mining operations in China, it does not mean that hardware can be seized,” Samson Mow, chief strategy officer at bitcoin development company Blockstream, told the BTC Times.

Meanwhile, Colyer expects interest in bitcoin mining, which is currently driven by energy and infrastructure costs, to surge over the next three years.

“This isn’t about the U.S. dominating the hash rate, that will never happen,” Colyer said. “There are going to be nation states that want to participate [in bitcoin mining], especially those countries that have access to low-cost energy infrastructure and a great investment environment.”

Digital Currency Group is betting that Foundry, which it says it “quietly” formed last year, can succeed where other bitcoin mining hopefuls have failed.

China-based bitcoin mining giant Bitmain had planned to create hundreds of mining jobs in Rockdale, Texas, in 2018 before abandoning the idea.

Just this year, Layer1 announced it raised $50 million to build a bitcoin mining operation in the U.S. but has recently been accused of misleading investors about the makeup of its “founding team.”