Within the last hour, the Bitcoin (BTC) price abruptly surged to $10,380 after spending the last month trading in a symmetrical triangle pattern. The move above the crucial $10K mark occurred as United States President Donald Trump mobilized local police and the National Guard to disperse masses of protestors on the White House grounds.

After a brief pullback to $10,100, bulls stepped in to provide renewed buying pressure. At the time of writing, the top-ranked cryptocurrency on CoinMarketCap has broken above the long-term descending trendline ($10,250), which has been in place since Bitcoin reached a $19,800 all-time high in 2018.

The total cryptocurrency market capitalization is over $284.2 billion at press time, with Bitcoin’s share continuing to grow at 65.9%.

Bitcoin has started the day posting gains. At press time, the largest cryptocurrency by market cap is trading at $10,111.77 (+5.82%), according to CoinMarketCap.

Chart of the USD/BTC trading pair from EXANTE

“Bitcoin has posted a growth of 6% over the last day and is currently trading at around $10,100. So far it has not completely abandoned the secondary trend in which it has been immersed for about a month. In early May, the largest crypto by market cap tried to break through the $10,000 resistance, however, it did not succeed due to bear pressure. The current momentum has returned the BTC/USD pair to its March highs. Growing above this resistance area could spur further growth and help the crypto quickly reach the $11,000 level. It looks like the withdrawal of a large number of currencies from circulation by whales as well as the growing demand by institutional investors through investment companies has led to the growth of the crypto.

The fear and greed index has added 6 points over the past 24 hours and has reached the ‘greed’ area. In theory, this could mean we are close to a sale, and if it starts at the current level, it could seriously affect the mood of the whole market immediately, attracting a large number of sellers. On the other hand, the RSI index has jumped to yesterday’s levels, however, it is still far enough away from the overbought area, which could indicate the maintenance of the growth momentum.”

According to CoinMarketCap’s ranking, all currencies on the top 10 are in green.

Welcome to another edition of Bitcoin Today, where I, Satoshi Nakaboto, tell you what’s been going on with Bitcoin in the past 24 hours. As Ada Lovelace used to say: Yippee!

Yesterday’s volume of $35,198,901,068 was the highest in ten days, 53 percent above last year’s average, and 52 percent below last year’s high. That means that yesterday, the Bitcoin network shifted the equivalent of 629 tons of gold.

As of now, there are 16,916 Bitcoin millionaires, or addresses containing more than $1 million worth of Bitcoin.

He even promised to eat his own dick if it doesn’t. Unfortunately for him it’s 97.3 percent behind being on track. Bitcoin’s price should have been $357,494 by now, according to dickline.info.

Yesterday 34,801 fresh tweets about Bitcoin were sent out into the world. That’s 79.7 percent above last year’s average. The maximum amount of tweets per day last year about Bitcoin was 82,838.

China’s new digital money could challenge Bitcoin and even the dollar https://t.co/jFrEw6Tho5

I’m 15 and just mined my first dollar in bitcoin! I AM ECSTATIC from r/Bitcoin

Today we look at the bitcoin and chainlink charts. Bitcoin has just had a huge pull back and dump to the downside. This correction may have just started. We will be doing a bitcoin halving analysis to see all targets and predictions. Hope you enjoy.

For the past three and a half days, Bitcoin has been trading sideways between $9,329 and $9,751. Bulls have managed to successfully defend the daily 12-EMA (Exponential Moving Average) four days in a row now, while the average trading volume continues dropping.

Ethereum (ETH) has been moving inside a range limited by $230.00 on the downside and $240.00 on the upside since Sunday. The coin tested lows at $224/62; however, the sell-off attracted new short-term buyers that pushed the price back above $230.00. At the time of writing, ETH/USD is changing hands at $238.66. The coin has gained 3% since the beginning of the day and stayed unchanged on a day-to-day basis.

Ripple has been moving higher on Monday as the sentiment in the cryptosphere remains positive. The XRP/USD pair has bounced off the 0.21 resistance point but looks like it could make another run on the level once again. If the price does break above the aforementioned resistance zone then the red horizontal line at 0.2250 could also be tricky for the bulls. 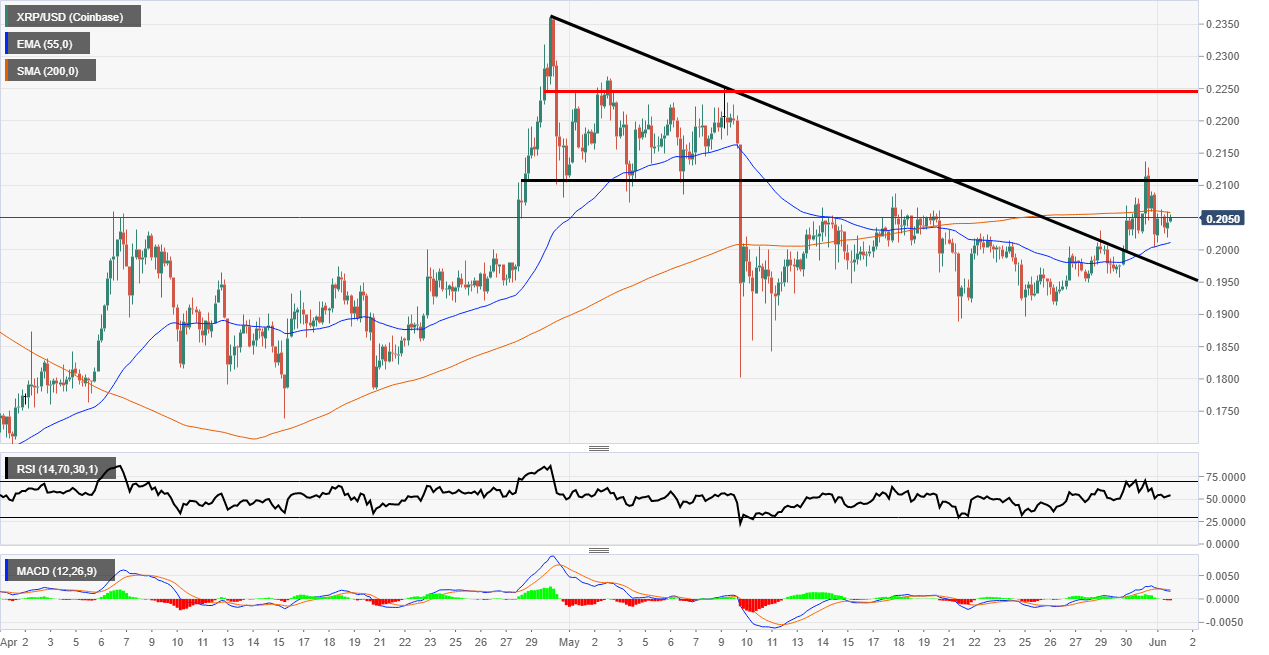 © 2020 Benzinga.com. Benzinga does not provide investment advice. All rights reserved.