After days of stagnating, both Bitcoin and Ethereum have registered strong gains over the past 48 hours.

While it is normally BTC leading the pack, this time, it’s ETH.

The second-largest cryptocurrency and largest altcoin is up 7% in the past 24 hours. Ethereum trades at $221 as of the time of this article’s writing, a price just shy of the late-April of $227.

Ethereum chart since the March capitulation lows from TradingView.com

Bitcoin, by comparison, is up 3.5% in the past 24 hours. The cryptocurrency is also trading 6% below its late-April high.

Some may see this as a sign of underlying weakness in the crypto-asset market. However, a top analyst thinks it’s a sign Bitcoin could soon set a fresh year-to-date high.

Although not an explosive rally per se, Ethereum’s recent upswing has allowed it to break past a key level.

The chart shows that Ethereum breached a downtrend that formed during April’s surge to $227. The level held as resistance on multiple occasions until today, when ETH cleanly broke past it in a convincing fashion.

Ethereum closed above the downtrend on the Thursday candle, indicating that it is now officially invalidated.

As Sorout’s image indicates, Bitcoin has not had similar luck.

The flagship cryptocurrency is still trapped underneath a similar downtrend formed after the late-April peak.

As Ethereum led Bitcoin higher during February 2020’s rally, chances are BTC is about to break past the level indicated in Sorout’s chart too. Should this happen, BTC could reach ~$10,100 in the coming day or two.

The fundamentals support the expectations of an imminent breakout.

One prominent digital asset analyst and investor recently explained that Bitcoin’s post-halving price action is very similar to that seen after 2012’s and 2016’s halvings:

“This capitulation is almost identical to the 2012 and 2016 halving capitulations (all within 21 days of the halving). This is a massive bull flag. The rallies from the Hash Ribbon Buy were almost vertical.”

The bullish sentiment was shared by Matt D’Souza — CEO of Blockware Mining.

He recently shared four macroeconomic happening and trends that will boost Bitcoin in the coming days. They are as follows: 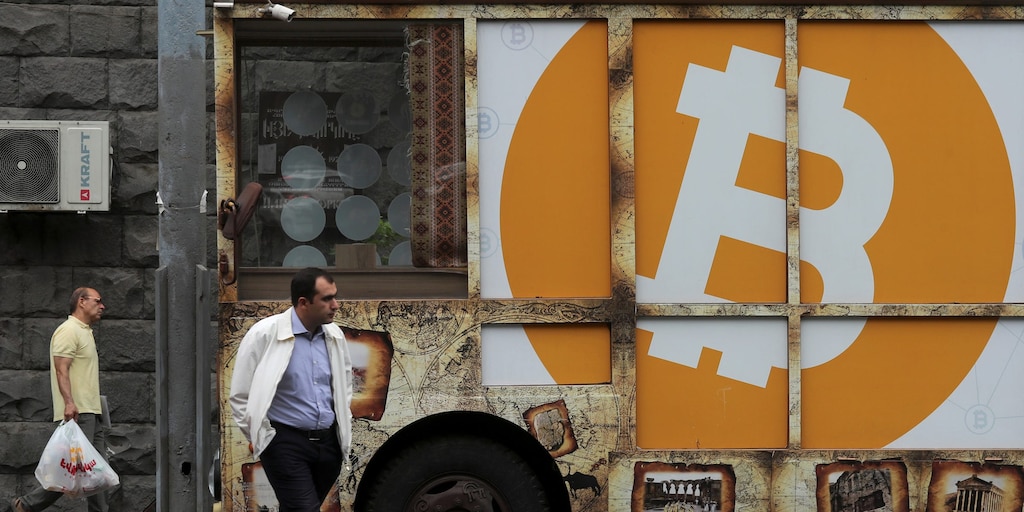 Goldman Sachs just made new enemies in the world of cryptocurrency.

On Wednesday, the bank released a report that outlined five reasons that crypto is not an asset class or a suitable investment, drawing the ire of those that support the digital currency.

The bank also called out cryptocurrency’s popularity with hedge funds, saying “while hedge funds may find trading cryptocurrencies appealing because of their high volatility, that allure does not constitute a viable investment rationale.”

It didn’t sit well with supporters of cryptocurrency. The Winklevoss twins, who co-founded Gemini, a cryptocurrency exchange platform, responded with vocal backlash to the report.

“Hey Goldman Sachs, 2014 just called and asked for their talking points back,” Cameron Winklevoss said in a tweet.

His brother, Tyler Winklevoss, also joined in the fray, tweeting, “the more I think about it, the Goldman report is probably a head fake.”

In addition, Goldman compared crypto’s popularity and epic 2017 rally to Dutch tulip mania, which occurred in the 17th century and is one of the most famous examples of a speculative bubble.

“Goldman Sachs served a cold dish to the crypto community, which was largely expecting them to come out with a bullish call on the world’s number one digital asset,” Mati Greenspan, founder of Quantum Economics, wrote in a note, Bloomberg reported.

He continued: “Perhaps Goldman is just trying to jawbone Bitcoin to buy more for themselves at a cheaper price. Who knows?”

The COVID-19 pandemic has ravaged the economies of countries all around the world and is showing no signs of stopping. The overwhelming response from global governments has been to place their countries under full or partial lockdowns. This has arguably saved many lives, but the economic fallout has been savage. The United States alone is on track to see a record 30% rate of unemployment and an unprecedented 30% drop in gross domestic product. China, the European Union, Japan and the United Kingdom aren’t faring that much better.

In such uncertain times, investors are naturally nervous. After the massive crash in March, and amid rising joblessness and fear, the stock market is back to registering new highs — in the middle of a pandemic. The American Main Street and Wall Street appear to be living in parallel universes, suggesting that the latest recovery could be little more than a dangerous bubble.

When that massive March sell-off spilled over to crypto and Bitcoin (BTC) subsequently descended to as low as $3,600, it shook the faith of those touting Bitcoin’s safe haven narrative. However, in the weeks since then, Bitcoin has recovered faster than any other asset. If the global macro situation worsens, we may see some more downward price pressure on Bitcoin in the short-term. Meanwhile, the long-term outlook for BTC could not be more bullish. Here’s why the worst crisis in a century is setting the stage for Bitcoin.

Along with the lockdowns, another measure that has been taken especially by wealthier nations is to throw money at the coronavirus problem. More than $8 trillion has been spent globally to counter the effects — and we’re still in the throes of the crisis. It’s becoming clear that $8 trillion is not even enough. So, how much will be enough, and how sustainable will that be?

When faced with plummeting GDPs, record unemployment and many businesses forced to close their doors forever, unlimited quantitative easing places even the wealthiest nations on a dangerous footing.

The risk of major global currencies experiencing hyperinflation will increase. While it’s unlikely that the U.S. or the U.K. will suffer the same scenarios of developing countries like Venezuela or Argentina, ceaseless money printing will at the very least lead to currencies becoming a poor store of value as their purchasing power is eroded and holders receive negative yield in a bank.

In the current climate, most everyday people may not be thinking about investing right now as much as keeping food on the table. However, wealthy and experienced investors have begun to see Bitcoin’s potential at last. Infamous macro investor Paul Tudor Jones recently added Bitcoin to his public portfolio, calling it the “fastest horse.” He also explained that he was buying it as a hedge for the inflation he sees coming from all the money printing. That sends out a powerful message.

Apart from the brief correlation with the stock market earlier this year, Bitcoin is largely uncorrelated to other markets. Risk managers understand the importance of diversifying an investment portfolio particularly in times like these, and many investors will likely follow Tudor Jones’ lead.

Almost as if to showcase arguably Bitcoin’s key quality, the Bitcoin halving reduced the block reward for miners, meaning that unlike fiat, its supply will go down. It’s such a stark contrast that even skeptics have to stop and think — or at least study the value of owning some Bitcoin.

The haven status of BTC would seem to be regaining ground as it aims to test the $10K barrier once again post-halving. Despite the Black Thursday event and all the volatility, it has shown impressive recovery and is still up some 35% YTD.

In fact, after this third halving and the recent rush on gold, Bitcoin as “digital gold” holds more weight now than ever. The demand for gold will cause its production to increase, yet, very soon, BTC’s inflation rate will be even “harder” than that of gold.

On top of the price, the fundamentals are looking good. The hash rate has dropped somewhat post-halving, but it’s still close to record highs. With zero stimuli or government bailouts, it has recovered all by itself.

Despite record unemployment, the cryptocurrency space has been growing strong with many firms, particularly exchanges, on a hiring spree, including Kraken and OKEx. The U.S.’s largest financial institution, JPMorgan, recently announced it would open bank accounts for crypto exchanges Gemini and Coinbase.

Not only have the smart money and institutional dollars begun to pour in but everyday people are (perhaps for the first time) questioning the value of money. It may not be something that they had contemplated before, but seeing trillions of dollars apparently created out of thin air makes them question how money is created. This lifts a veil on government practices and makes a stronger case for Bitcoin.

As Bitcoin continues to prove its worth and emerges as a must-have in investors’ portfolios, more eyes will turn to it. Many of those people furloughed at home will begin to seek more information about it and realize that they have an alternative to the current financial system. Now more than ever is the crypto community’s time to shine through the provision of high-quality educational content.

To that end, OKEx has launched a Beacon Program at the end of this month specifically tailored to the hard-hit European region. This will be a chance for people affected by the crisis to delve into the blockchain and crypto space. Through masterclass content and mentorship from top OKEx execs, we hope to inspire and kickstart new careers for people so that some good can come out of the crisis.

COVID-19 — for all the hardship and fatalities it has caused — may just prove to be the biggest catalyst for Bitcoin yet.

Jay Hao is a tech veteran and seasoned industry leader. Prior to OKEx, he focused on blockchain-driven applications for live video streaming and mobile gaming. Before tapping into the blockchain industry, he already had 21 years of solid experience in the semiconductor industry. He is also a recognized leader with successful experiences in product management. As the CEO of OKEx and a firm believer in blockchain, Jay foresees that the technology will eliminate transaction barriers, elevate efficiency and eventually make a substantial impact on the global economy.

The critical level in Bitcoin is $ 9070: possibilities in Ethereum, Litecoin and Ripple

Ethereum Classic (ETC) Prices Again Climbed Back To The Level Of $7.00
Did the article help? Rate it