Cryptocurrency Not An Asset Class?

On May 27, the Goldman Sachs Investment Strategy Group of Consumer and Investment Management Division organized an investor call entitled “US Economic outlook & Implications of Current Policies for Inflation, Gold and Bitcoin.” Goldman Sachs presented a case against investing in Bitcoins “on a strategic or tactical basis,” stating that “cryptocurrencies including Bitcoin are not appropriate as an asset class”.

However, the lack of fundamental understanding of cryptocurrencies may have hindered Goldman Sachs’ credibility on crypto-related matters. The Investment Strategy Group, which is part of the bank’s wealth management division, focuses primarily on serving high net worth clients. While opinions and client advisory are respected, the commentary on Bitcoin is logically incoherent.

It asserts that cryptocurrencies do not generate cash flow or earnings, nor do they exhibit evidence of inflation hedge, and thus, are not considered an asset class. Following this line of reasoning, gold, a universally recognized asset class, ticks all the boxes. Goldman Sachs recognizes that even gold does not show consistent evidence of hedging inflation.

It says cryptocurrencies are extremely volatile, and the returns are no more than inflated bubbles. However, they shy away from discussing the unparalleled Sharpe ratio and the Sortino Ratio of Bitcoin, which are reminiscent of Amazon. Normally, investors do not consider volatility independently without analyzing the return.

“Although individual cryptocurrencies have limited supplies, cryptocurrencies as a whole are not a scarce resource,” Golden Sachs claims, citing Bitcoin Cash and Bitcoin SV as being “nearly identical clones” to Bitcoin. Goldman Sachs is blatantly unaware of the importance of hash power to cryptocurrencies based on Proof of Work. The aggregate hash power of BCH and BSV accounts for only 4-5% of that of BTC, rendering their networks much more vulnerable to hostile attacks than BTC. BCH and BSV can’t compare to BTC as clones, and the scarcity of Bitcoin can’t be denied.

Goldman also denounces Bitcoin as “conduit for illicit activities” including money laundering and darknet markets. According to Chainalysis, 2.8 billion USD in Bitcoin was sent to currency exchanges from criminal entities in 2019, with other data claiming that darknet market revenue which was typically exchanged through cryptocurrency reached 800 million USD in the same year.

However, illegal activities related to Bitcoins represent a very small fraction.According to the World Economic Council, ”if illicit trade were a country, its economy would be larger than Brazil, Italy and Canada – and as large as Mexico and Indonesia combined.“

People without a blockchain background often tend to believe that criminal activities are easily conducted through cryptos, but that is a misconception. In fact, it is much more difficult to trace the flow of cash than that of cryptos. On-chain ledgers are public and transparent, and on-chain analysis companies such as Chainalysis, work closely with law enforcement agencies such as the IRS, FBI, and DEA.

After all, if Bitcoin and other altcoins are fraught with risks and uncertainties, why do investors worldwide, even veteran investors such as Paul Tudor Jones, plough money and time into crypto? If an asset rises substantially and sustainably, it is better to learn the rationale behind it rather than jumping to a hasty conclusion.

Bitcoin may not have become the digital gold yet, but it may be getting there. Ultimately, only time will tell.

A giant repositioning since December 2017 is about to come to a close, claims Positive Crypto, leading to new price all-time highs.

That is the opinion of popular social media trader and analyst Positive Crypto, who on May 29 declared that the largest cryptocurrency’s 896-day climbdown would soon be over.

According to an accompanying chart, the time since December 2017 has been “one massive accumulation phase,” during which investors repositioned themselves and bought in.

This “consolidation structure,” as Positive Crypto calls it, is now ripe for disintegration, to give way to a new bull run which will obliterate the $20,000 zone.

He wrote in comments:

The last 896 days were simply one massive re-accumulation phase before the run to 100k+ #bitcoin, and the consolidation structure will soon be broken. Are you prepared?

Despite wobbling around the halving and after, the Bitcoin price has entirely erased losses from its March crash, which Positive Crypto notes formed a “higher low” compared to the peak of the bear market in December 2018.

That cycle of “higher lows” itself positions the market for upside, the chart suggests.

As Cointelegraph reported, various analysts are now convinced that after this month’s block subsidy halving, a bullish trend will kick in for Bitcoin within the next one-to-two years at most.

Network indicators are also providing food for thought. Sixty percent of the Bitcoin supply, for example, has not moved in a year or more, a trend which has stayed the same for five months, despite wildly varied price performance.

Selling appears low on investors’ list of priorities — exchange reserves are now at their lowest since December 2018.

Two popular crypto analysts believe Bitcoin is revving its engine for the next bull run.

Tone Vays says a fundamental shift is underway. On the latest episode of Trading Bitcoin, Vays says revelations that demand for BTC is far outpacing the amount of new Bitcoin being created could become a significant catalyst for the leading cryptocurrency, The Daily Hodl reported.

The institutional crypto asset manager Grayscale is fueling the buying frenzy as high-net-worth investors purchase GBTC, which is fully backed by real BTC, at record rates.

“That is a very, very bullish fundamental scenario. I wouldn’t call that a news event. It’s a borderline news event and a fundamental event,” he says. “Now that everyone knows it, the FOMO can help drive Bitcoin higher. But knowing that GBTC is buying up the majority of the Bitcoin is basically telling everyone there’s not enough supply of Bitcoin.”

Vays says the heightened demand for Bitcoin after the halving, which cut the rate of new supply entering the market by half, shows that forecasts such as the stock-to-flow model may prove to be accurate. The model, pioneered by the anonymous analyst PlanB, indicates BTC will hit $288,000 by the end of 2024.

“The stock-to-flow model is clearly showing its prowess in the fact that there’s more demand for Bitcoin at the moment than supply,” he says. “Which is very good, and it can definitely send Bitcoin higher. Like I’ve been saying since these lows, I am now a bull. I am looking for pullbacks when it starts to get out of control, but I am generally a bull… Buy all dips. It may be difficult to time some of these dips, but this is the time to buy all dips. The capitulation has ended.”

Despite his optimism, Vays warns that Bitcoin is once again trending alongside the S&P 500, which could be a problem if the stock market takes a hit.

“Now there’s one more factor here and that is the S&P 500, and it’s a pretty significant factor,” he says. “So two things on the S&P 500. First of all, Bitcoin is rallying with the S&P. The S&P has not yet pulled back since March. So we don’t know what Bitcoin is going to do if the S&P craters, which I expect it to crater.”

Meanwhile, Positive Crypto has declared that the largest cryptocurrency’s 896-day climbdown will soon be over, Cointelegraph reported.

The time since December 2017 has been “one massive accumulation phase,” during which investors repositioned themselves and bought in.

This “consolidation structure,” as Positive Crypto calls it, is now ripe for disintegration, to give way to a new bull run which will obliterate the $20,000 zone.

He says, “The last 896 days were simply one massive re-accumulation phase before the run to 100k+ #bitcoin, and the consolidation structure will soon be broken. Are you prepared?”

Despite wobbling around the halving and after, the Bitcoin price has entirely erased losses from its March crash, which Positive Crypto notes formed a “higher low” compared to the peak of the bear market in December 2018.

That cycle of “higher lows” itself positions the market for upside, the chart suggests.

False Alarm? Bitcoin Upsurge to $9,600 Is a Weak Futures-Driven Rally

The price of Bitcoin (BTC) rose to as high as $9,620 on May 28 ahead of the CME futures market’s monthly close. Market data shows the rally of BTC — the biggest cryptocurrency by market capitalization — was primarily caused by the futures market. Historically, a futures-led rally leaves the top cryptocurrency vulnerable to a pullback.

Bitcoin rejected the $9,500 to $9,600 resistance range with strength, falling below $9,400 within a span of four hours. Analysts say the probability of a long squeeze is increasing as 74% of positions account for long contracts.

The most noticeable evidence that suggests the futures market was behind the uptrend of Bitcoin from $8,700 to $9,600 is the increase in the open interest of BTC contracts.

Open interest calculates the total amount of active long and short contracts held by traders on futures exchanges. On BitMEX and OKEx alone, $1.6 billion worth of Bitcoin futures contracts are currently open. 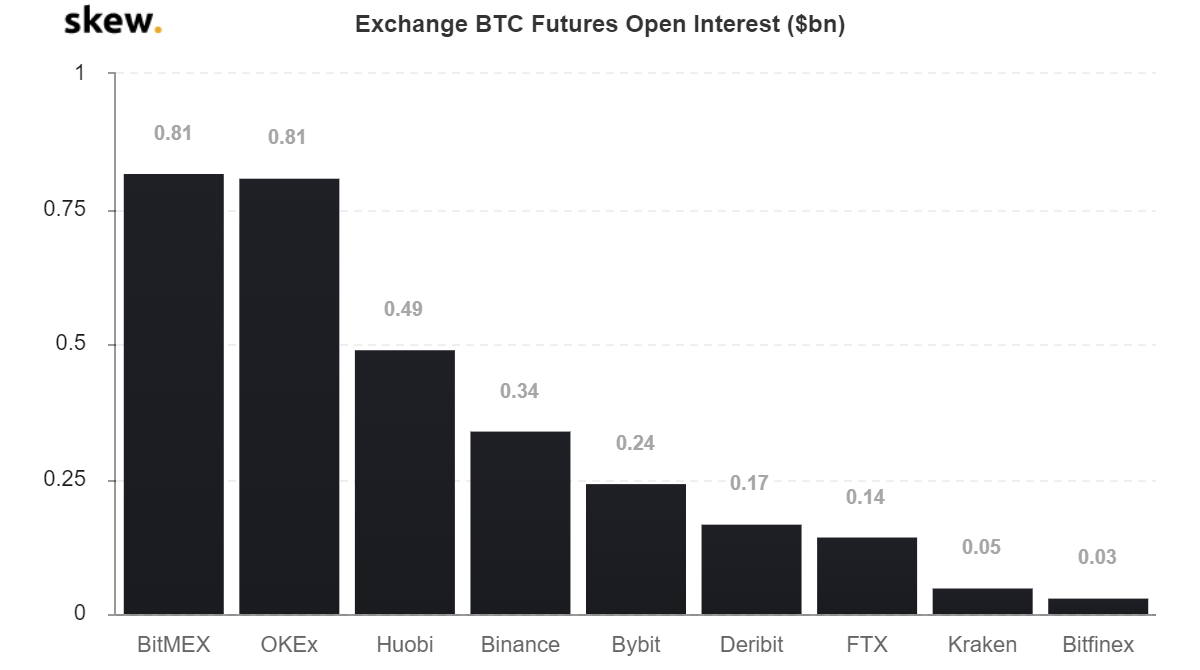 In the last four days, the open interest of BitMEX increased from $500 million to $800 million, increasing by around 60%.

Since early May, however, the spot volume of Bitcoin on Coinbase and LMAX declined from $600 million to around $150 million per day. Since May 25, the daily spot market volume remained stable in the $150 million to $180 million range. 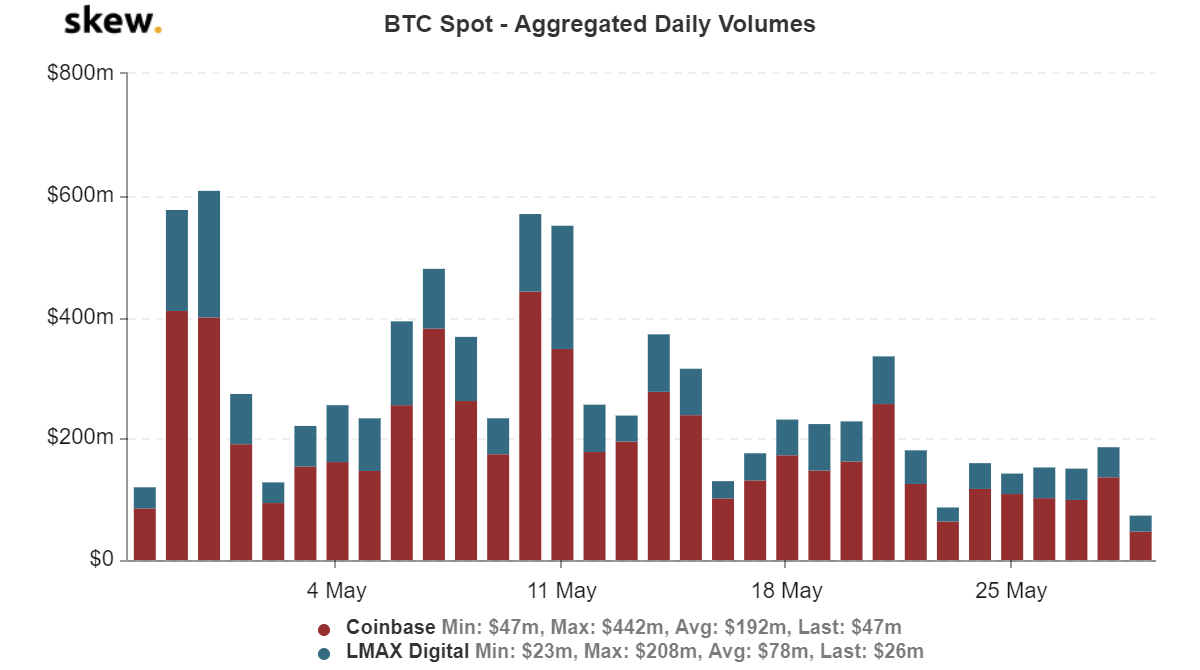 Despite a 10% increase in the price of Bitcoin in merely four days, the volume of the spot market barely moved. It shows that the majority of buying demand came from OKEx, BitMEX, Huobi, Binance, Bybit and Deribit over spot exchanges like Coinbase.

Traders in the futures market are typically leveraged. Futures exchanges like BitMEX and Binance support maximum leverage of up to 125x. That means traders can trade Bitcoin with large amounts of borrowed capital.

When the price of Bitcoin sways in the opposite direction than the majority of positions in the futures market, it can trigger a cascade of liquidations.

Currently, the futures market is overwhelmingly dominated by long contracts. Hence, if the price of BTC sees an abrupt drop in the near-term, it increases the probability of a large short squeeze.

Traders remain divided on the current trend of Bitcoin because if the price continues to rise without a short squeeze, then it may set BTC up for a proper bull run.

For now, due to the high level of activity in the futures market and the rejection of Bitcoin at $9,600, traders are seemingly taking a cautious approach.

Top Commodity Strategist Claims Bitcoin Most Likely Asset to Rally in 2020; Here’s Why

Bitcoin Halving: A New Class Of Bitcoin Millionaires May Emerge

Binance DEX Rolls Out Ontology-Pegged Asset
Did the article help? Rate it