Bitcoin pushed higher earlier in the session but as you can see from the 1-hour chart below the asset failed to take out some key levels. BTC/USD did manage to spike through the trendline but it didn’t manage to gather enough momentum to sustain the move.

Ethereum price is trading in the green by 12.35% in the session on Thursday.

ETH/USD encountered a huge wave of buying after being under pressure on Wednesday.

There is a known buying region down at $150, which supported Ethereum in its spike north.

Litecoin price is trading in positive territory by+7.80 % in the session on Wednesday.

LTC/USD encountered explosive buying down at $38.50, an unexpected surge.

The price managed to print fresh highs for the week, following the jump north.

Ethereum catches up with Bitcoin in terms of value transfer

The research and data analysis platform Messari has collected data showing that Ethereum has caught up with Bitcoin in terms of daily value transfer. Messari’s analysis attributes the increase of value transfer on the Ethereum blockchain to the stablecoins.

(…) stablecoin issuance ballooned over $8 billion in the quarter. The action was so dramatic it shook the prevailing order in cryptocurrencies. 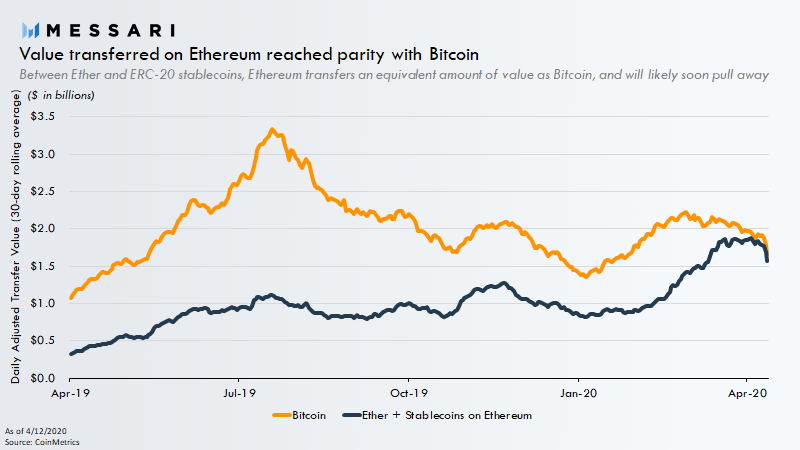 With regard to this growth, the blockchain research company has found that stablecoins accounted for 80% of the daily value transfer on the Ethereum network. Messari also added:

On the other hand, Messari also determined that stablecoins are used to make “significantly larger” transfers than Bitcoin. Stablecoins are more suitable for transferring value between exchanges. According to Messari, this is one of the most important uses for stablecoins today. 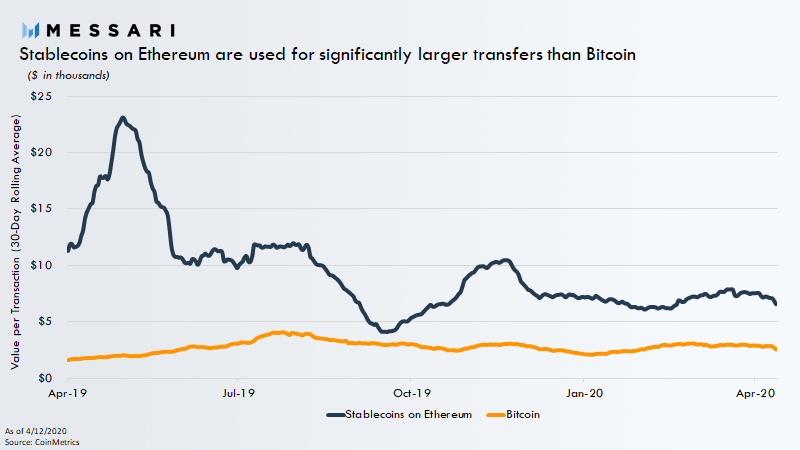 Messari predicts that Ethereum will continue to dominate the issuance of stablecoins. Compared to its competitors, Ethereum offers maturity and a dynamic ecosystem. Messari claims that investors are simply “following the money”. Among the stablecoins that have benefited most from the growth in value transfer is Tether, followed by Circle’s USDC, and the stablecoins of exchanges Binance and Huobi. 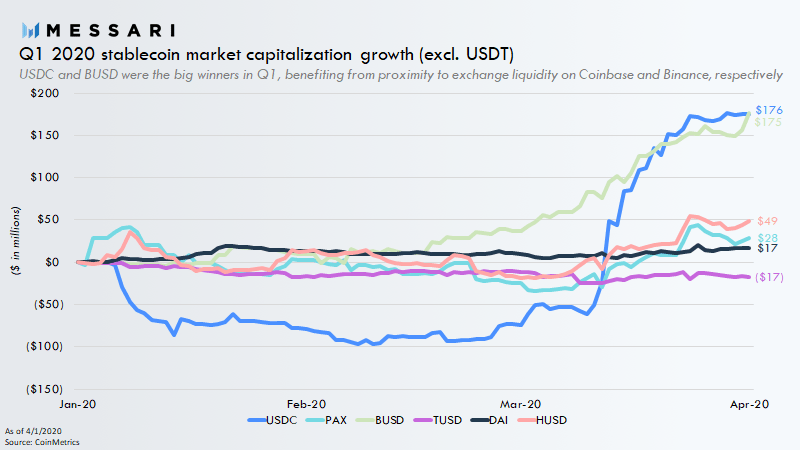 The announcement of Libra and the growth of stablecoins last year caused many consider 2019 as the year of stablecoins. But if trends from the past quarter persist, 2020 could very well give 2019 a run for its money.

However, a report from the Financial Stability Board (FSB) could change this trend. According to the FSB, stablecoins represent a potential danger to the world economy. Although the FSB recognizes that there is not yet a stablecoin that meets the characteristics to be a real threat, the institution is already working on ways to regulate and control the emergence of this type of asset. Representing 80% of the daily transfer value for Ethereum, this could be catastrophic for the platform, Bitcoin and the entire crypto market.

Bitcoin’s value proposition, according to many of its investors, is cut and dried: as they say, it’s a scarce, decentralized, borderless, and digital form of money for the world. The value propositions of other cryptocurrencies, however, is a bit more muddied.

A case in point of this conundrum is as follows: some say that while Ethereum has immense value as a technology for decentralization, but Ether/ETH as a token is worthless.

Jeremy Rubin, the co-founder of the MIT Bitcoin Project and a prominent crypto entrepreneur, summed up this sentiment well in an op-ed for TechCrunch titled “The collapse of ETH is inevitable.” In it, he wrote that while Ethereum will “succeed beyond anyone’s wildest dreams,” the cryptocurrency will eventually become “worthless.”

Although the explanation for this shocking sentiment is a bit long-winded, the core of it is as follows: if Ethereum transactions can run without ETH paid as “gas” because of certain platforms and contracts, “there’s no reason [for it] to be valuable.”

According to two prominent industry executives and investors, this sentiment is absurd.

According to the duo, there are three distinct mechanisms (some of which are incoming, not activated yet) that will ensure that the second-largest cryptocurrency by market capitalization will appreciate over time:

Ether’s price is going to appreciate.

This is a forward looking statement about the value of an asset. Why am I able to say this with confidence?

The long and short of it is: due to the scarcity of ETH enforced by these mechanisms working in tandem, supply-demand dynamics dictate that the cryptocurrency’s value will rise should the growing demand for ETH outweigh the minted supply. Notably, this is a long-term trend as opposed to a short-term one.

So, what’s the result of a higher ETH price?

According to Vitalik Buterin, the Russian-Canadian founder of the leading blockchain, the higher the cryptocurrency goes, the more valuable it becomes.

In a live iteration of Unchained, Laura Shin’s crypto-focused podcast, Buterin explained that he thinks an increased Ethereum price is even productive, despite many bashing the crypto industry’s focus on price and wealth:

“I can tell you what things are clearly important about why the price being higher rather than lower is good. One of them is obviously security. If the price is zero, then the network can’t be secure. That’s true in proof-of-work and proof-of-stake.”

He added that with higher prices, innovators are more incentivized, both monetarily and psychologically, to continue using Ethereum.

If we assume Buterin’s statements and the sentiment of the Bankless podcasters to be entirely true, that means the crypto industry has a vicious positive feedback loop on its hands where higher ETH prices beget more usage, which begets higher prices, which begets more adoption, and so on.

It isn’t clear if there’s a limit on this trend; as long as there is a growing level of demand for Ethereum, a shrinking supply of the cryptocurrency, whether it be through DeFi or being burnt, should boost prices higher.

But to what extent, no one is all too sure.

A decentralist at heart, Nick has shown interest in Bitcoin and cryptocurrencies since 2013. He has since joined this industry as a full-time content creator, focusing on written content and visuals. Aside from working with other leading trade publications, Nick is a part-time creative at HTC’s Bitcoin division, EXODUS. He is based in Canada, where there is an apparent lack of industry events.