The daily average transaction values across the Ethereum platform are currently equal to those of the Bitcoin (BTC) network, the latest cryptonews show. This shows that Ethereum is now a rival to the most dominant coin when it comes to daily value transfers.

All of this comes from the blockchain analytics firm Messari, showing that the daily value transfer (which is the total value of assets moved on the blockchain over a day) of the Ethereum network began rivalling those on the Bitcoin network as of April 12, with approximately $1.5 billion. The value transferred on Ethereum includes Ether (ETH) as well as other stablecoins which are currently supported by the blockchain, most notably Tether (USDT).

Driven by a global flight to safety amidst the coronavirus pandemic, stablecoin issuance ballooned over $8 billion in the quarter.

Ethereum is now a rival to Bitcoin for daily value transfers. The Ethereum latest news show that the parity is mainly a result of the performance of the Bitcoin network, which reached a high of over $3 billion daily transactions in July 2019. However, it has not been able to sustain that level even as the value on Ethereum rose.

The second largest cryptocurrency reached $115 million in daily transactions in December 2018, which has risen steadily to around $1.5 billion today. The BTC network also saw growth in its daily value transfer starting in January, but has been less utilized ever since the crypto bloodbath in March this year.

What we can also see is that this is not the first metric on which Ethereum has beaten Bitcoin. We can see that Ethereum is now a rival to BTC when it comes to the transactions per second (TPS) too – the BTC network peaked at 4.7 during the 2017 all time high and now it has fallen to just under 3 TPS. Meanwhile, Ethereum’s network peaked at 15 TPS in 2018 and is currently processing around 9 TPS on its network.

Even though both of the networks work with a healthy number of core protocol developers for their needs, Ethereum is again the most active. As of March 7, the Ethereum network had 99 monthly developers on average, while Bitcoin came in second with 47.

In a recent Twitter post, Vitalik Buterin, the co-founder of Ethereum blockchain, did not hide his feelings when it comes to the concept of cryptocurrency mining through the use of smartphones. He considers crypto mining via mobile phones as something still not possible with any real efficiency.

Vitalik tweeted: “Mining on phones is a fool’s game. Goes against everything we know about hardware economies of scale and more likely to trick users with false hope than help them.” In other words, Vitalik downplays the recent partnership deal between HTC and Midas Labs to enable users to mine Monero cryptocurrency on HTC blockchain mobile phones. On April 13, Taiwan computer manufacturing firm HTC collaborated with Midas labs, a designer of programmable blockchain mining chips, to enable Monero (XMR) mining on the HTC blockchain-enabled phones via DeMiner app, a Monero mining application developed by Midas Labs. The DeMiner app will likely be released in the second quarter of 2020 (April 1 – June 30). It will allow direct mining from the mobile phone because of its low energy consumption.

However, critics identified faults in the innovation, saying that it is fruitless and somehow worthless. They condemned the DeMiner app, stating that it would take an estimate of 37 years to earn a Monero cryptocurrency if a person mines on the smartphone every day. A series of condemnations continue over the ineffectiveness of the application, which explains why the founder of Ethereum, Vitalik Buterin, intervened and said that such initiative only gives users false hopes.

Buterin said that the idea of a mobile phone managing to mine stands as a contradiction of everything the cryptocurrency industry has learned. It spits in the face of the economies of scale, which has dominated in the cryptocurrency industry. Buterin describes it as a trick to give potential users false hope, rather than helping them. He highlighted that staking would rather work well on smartphones, describing it as quite promising. He mentioned that staking on smartphones does not require any particular resources, and the cost/benefit ratio is greater than the ordinary crypto mining.

However, there were mixed reactions on social media over Buterin’s remarks. Some people think that he underestimated the concept of mobile crypto mining, citing the cryptocurrency mining of Ardor that specializes in mobile phones. Others agree with his comments. But some people feel that mobile phones can maximize connectivity and crypto mining, including staking on smartphones in the future.

Huobi Global is among the first crypto exchange platforms that launched a new version of smartphones, which include cryptocurrency or blockchain features like DApp store, cold-storage wallet, crypto wallet …etc.  The affordable blockchain phones have features like blockchain-related apps and are alerting users when the price of specific crypto increases or decreases. The phones have an optional cold storage wallet with in-built cryptocurrency money wallet app. However, users cannot mine every kind of cryptocurrency using a smartphone. The process may not be profitable because of the low processing power of mobile devices.  Buterin’s comments are right because crypto mining is normally a highly sophisticated and complex exercise that average smartphones may not handle.

In a surprise move, Bitcoin has climbed several resistance levels including $6,800 and $6,900 to spike past the critical $7,000. The bullish move is a confirmation that buyers have been present in the market all along and were waiting for the right time to strike. Besides, Bitcoin halving is around the corner which means that investors are finally taking their positions in anticipation of a breakout to highs above $8,000. Many experts and cryptocurrency figures believe that halving will set Bitcoin back on the track to $20,000.

Bitcoin price is trading at $7,036 at the time of writing after adding more than 6% to its value at the opening ($6,621). An intraday high has been formed at $7,145 from an intraday low of $6,466. It is apparent that the region between $6,450 and $6,600 is key support for BTC/USD after being tested twice in the same week. More volatility is expected in the coming weeks as Bitcoin grinds into its third block reward halving. I expect Bitcoin to continue with a pre-halving rally towards $8,000. However, the most significant breakout could take place following the halvening process.

Ethereum is the most bullish among the top three cryptocurrencies. It has grown by 10.91% on the day to trade at $169. A break has also been made above

Ripple has not been left behind but it has not reacted in the same measure as Ether. The third-largest crypto is trading at $0.1897 after adjusting upwards from $0.1806 (opening value). The step above $0.19 hit a wall at $0.1932. Support at $0.19 needs to be reclaimed and focus maintained at $0.20 to keep buyers and investors motivated.

Ethereum, the second-largest digital asset jumped above $160.00 and hit an intraday high $168.05 against USD. Notably, the coin has been also gaining ground against BTC. ETH/BTC hit 0.0241 BTC and retreated to 0.0239 BTC by press time.

From the technical point of view, ETH/BTC broke above an important resistance level created by a combination of the upper border of the triangle pattern and 23.6% Fibo retracement for the downside move from February 18 high 0.0284 BTC. This development triggered by a broad altcoins recovery created a strong bullish impulse and pushed ETH to the highest level since March 14.

Notably, the upside momentum remains strong despite the retreat from the intraday high, which means the coin may retest 0.0241 and move to the next technical barrier created by 50% Fibo retracement for the above-said movement at 0.0243.

ETH/USD tested waters below $150.00 during early Asian hours, however, the dip was heavily bought. The momentum pushed the coin back above critical $150.00, while improved sentiments on the cryptocurrency market helped the coin to extend the recovery above the broken upside trendline (currently at $158.50) and towards psychological $160.00. 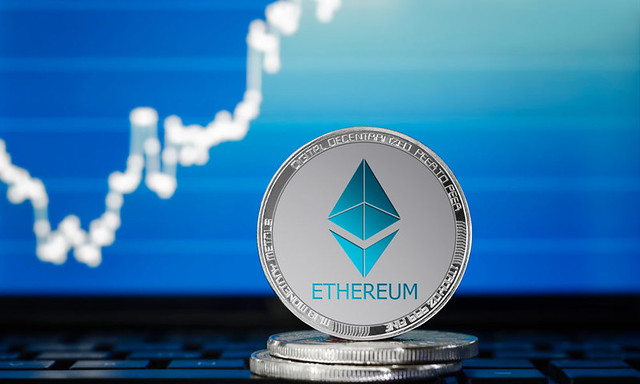 Research firm Messari has noted that between Ether and ERC-20 stablecoins, the Ethereum network transfers the same amount of value as Bitcoin and it will soon surpass it.

This is a story of the explosion of stablecoins in Q1 2020.

According to the data, the first quarter of 2020 was the best ever for stablecoins, with issuance surging to US$8 billion [AU$12.7 billion], largely driven by a global flight to safety amid the COVID-19 pandemic.

The charts show that stablecoins added as much market capitalization in Q1 than all of 2019, and they now account for 80% of daily transfer value on Ethereum.

Tether printers were churning out more tokens as its market cap topped $6 billion, pushing USDT as high as third in the coin cap tables.

One theory for increased USDT demand is that Chinese investors are trying to get more exposure to the dollar as their economy contracts.

The news is good for Ethereum, which has become the dominant value transfer layer in the crypto ecosystem.

Micky is a news site and does not provide trading, investing, or other financial advice. By using this website, you affirm that you have read and agree to abide by our Terms and Conditions.