Since the $3,700 bottom seen in the middle of March, Bitcoin has rocketed higher, rallying as high as $7,470 in an impressive fashion. While impressive, the cryptocurrency is not yet in a full-blown bull run, with there existing a confluence of resistance overhead the BTC price, analysts are gaining confidence a bull run is near.

Glassnode, a leading cryptocurrency data firm, suggested that per one of its proprietary indicators that accurately timed Bitcoin’s market tops, a full-blown “bullish trend reversal” may soon be confirmed.

While the crypto market often moves without rhyme or reason, its trends can be tracked and traced by looking at on-chain data.

According to Glassnode, one of its on-chain indicators, the Short-Term Holder Net Unrealized Profit/Loss (STH-NUPL), is indicating that BTC remains in a bear trend, with short-term holders found to be in “capitulation.”

The firm indicated that once the indicator enters into a stage of “hope,” which means that short-term Bitcoin investors will be in profit, it will likely be confirmed that BTC has seen a “bullish trend reversal” and will enter back into a cycle of growth as opposed to weakness.

The current upwards trend needs to be confirmed for a bullish trend reversal.https://t.co/SWEJf7FZDF pic.twitter.com/nFN0ZDVzjG

Although Glassnode’s indicators do not suggest a bull market has started, prominent analysts are certain that this phase of the market cycle is very near.

While he didn’t mention his prediction in this latest interview with Bloomberg, Novogratz last week told CNBC that he remains certain Bitcoin will pass $12,000 in October, then eclipse its previous all-time high of $20,000 by the end of the year.

The former Wall Street investor put so much faith in this forecast that he said:

“This is the year of Bitcoin and if it doesn’t go up now by the end of the year, I might just hang my spurs.”

What Novogratz is saying is that he thinks if the bull run hasn’t started already, it’s near.

Bitcoin (BTC) is supposed to trade at $50,000, according to gold bug Peter Schiff

If Bitcoin cannot rally now, it never will.

That’s the message that Peter Schiff is trying to convey to the cryptocurrency community. The gold bug says that the leading cryptocurrency should be already changing hands at $50,000 due to negative interest rates, massive stimulus efforts, and the global pandemic.

The price of gold recently reached $1,750 a troy ounce, its highest level in more than seven years. The fact that the yellow metal performs as a safe haven should also benefit Bitcoin, according to Schiff. However, the digital gold is yet to live up to its highly contested status of a safe haven.

Bitcoin’s lethargic price performance during its first economic crisis begs the question: why would it go up tomorrow?

As reported by U.Today, legendary chartist Peter Brandt claimed that crypto would be ‘in big trouble,’ if Bitcoin doesn’t start another bull run due to the COVID-19 fallout.

Former Wall Streeter Mike Novogratz is certain that ‘money growing on trees’ will eventually push the BTC price higher, but he is ready to throw in the towel if the orange coin doesn’t reclaim its all-time high this year.

At press time, BTC is stuck at the $6,600 level that has turned into a robust support level as of recently. While some analysts try to call the bottom, Schiff is certain Bitcoin’s most recent rally is going to stop here because of ‘how bad’ the coin’s chart looks.

That said, Bitcoiners shouldn’t take Schiff’s tweets at face value. Moreso, they can be used as a reliable contrarian indicator given that BTC often tends to pump after Schiff’s bearish calls.

Bitcoin has spent the week trying to recover from the fall it encountered last week amid a drop from $7,441 (on Coinbase). The digital asset took a breather above $6,500 and even recovered topping levels past $6,900. However, it has become increasingly difficult to sustain gains towards $7,000.

For this reason, another lower correction on Wednesday forced Bitcoin below various support areas $6,800 and $6,600. The bearish keg extended under $6,500 before finding refuge at the 38.2% Fibonacci retracement level taken between the last swing high at $10,567 to a swing low $3,854. A shallow bounce from this level catapulted BTC/USD above $6,600 but the next short term hurdle at $6,700 is still standing in the way.

In spite of the fall to levels marginally below $6,500, Bitcoin buyers have managed to remain in control and even reclaimed support above $6,600. At the moment, the focus is still on breaking the resistance at $7,000 and pulling BTC/USD above $8,000 as we approach the May 2020 block reward halving.

Exchanges are experiencing a drop in the number of cryptocurrency assets in their custody. Particularly, Bitfinex and BitMEX have seen a significant fall in the last few weeks. Intriguingly, the transfers made to exchanges have not been altered much; they remain at par with those in mid-2019.

Meanwhile, Bitcoin is likely to enter into a consolidation period above $6,600. The RSI downward slope has slowed down and if levels around the average (50), then sideways action could take center stage. The support at the 38.2% Fibo is expected to remain in place as long as other technical levels such as the RSI and the MACD maintain stability. Gains above $7,000 are still possible heading into the halving event. 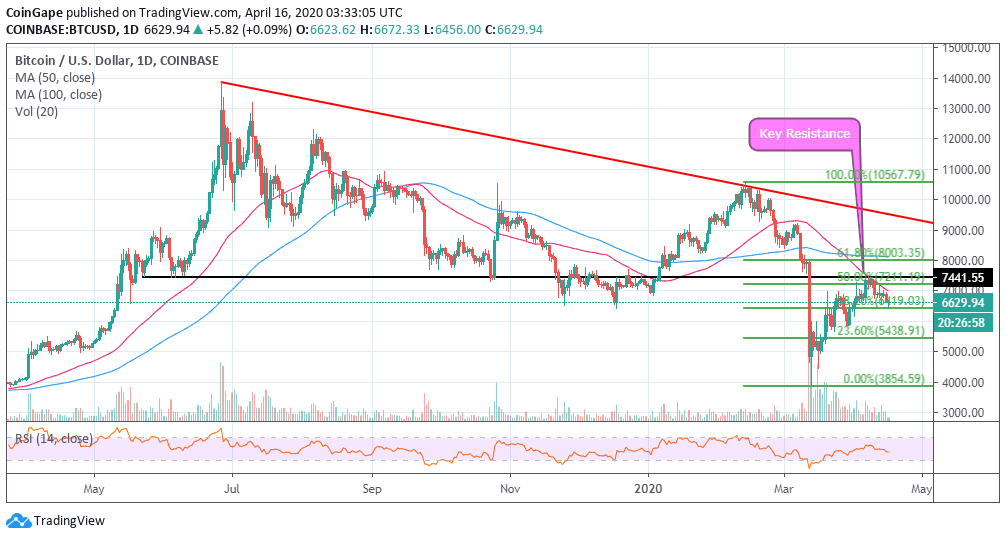 Bitcoin Vulnerable For Bigger Decline To $6K After This Technical Rejection

Yesterday, we discussed the chances of a bearish rejection in bitcoin near $6,950 or $7,000 against the US Dollar. BTC price did fail to surpass the $7,000 resistance area and started a fresh decline.

There was a sharp drop below the $6,800 level and the 100 hourly simple moving average. It opened the doors for more losses and the price broke the $6,555 support area. It traded to a new weekly low at $6,476 and currently correcting higher.

However, there are many hurdles on the upside for the bulls, starting with $6,730. It represents the 50% Fib retracement level of the recent decline from the $6,984 high to $6,476 low. The first key resistance is near the $6,800 level and the 100 hourly simple moving average.

There are also two key bearish trend lines forming with resistance near $6,790 and $6,960 on the hourly chart of the BTC/USD pair. If the pair corrects higher from the current levels, it is likely to face a strong selling interest near $6,800.

Once the current correction wave is complete, bitcoin is likely to resume its decline below the $6,600 level. An initial support is near the $6,555 level, below which the price might struggle to stay above $6,476.

Any further losses are likely to lead the price towards the $6,200 support level or the $6,000 pivot zone in the near term.

Hourly MACD – The MACD is about to move into the bullish zone.

Hourly RSI (Relative Strength Index) – The RSI for BTC/USD is currently recovering towards the 40 level.

Previous
Bitcoin newsBitcoin Price Analysis: The Storm Is Here – Bitcoin Just Surged $550 In 90 Minutes To Over $7K, What’s Next?
Next
Bitcoin newsHere’s How the Fed Could Push Bitcoin Towards All-Time Highs in 2021